A few weeks back I submitted a post about my Light & Motion Stella 120 that I was having issues with, it would only run on high for about 25 minutes before it started to flash and turn itself to the lower setting. Since we were (and still are) in the season of shorter days and mandatory night rides it was a little unsettling to be having issues with a light that was about one season old. After reading up on probable causes of the issue I started to realize that perhaps the light wasn't to blame as much as the user was. Although to be fair the procedures and processes to keep the NiMH battery working optimally would give an anal retentive person a run for their money, I'm usually lucky to get home in time to ride, take a shower and scarf down some food before it's time to call it a night and start all over again in the morning. Coddling a battery just isn't in the schedule, anyway I contacted Light and Motion's support figuring that they would tell me that it might be my fault that the battery went dead so quickly and I was S.O.L, truthfully it would be hard to argue with them after actually reading the user manual so I prepared myself for the worst while hoping for the best. As it turned out the best is what I got, rather than place blame or explain that there wasn't anything they could do because of my lack of attention to details when it came to care of the battery, they instead offered to either let me ship the light in and they would evaluate it and fix it at a nominal charge or I could upgrade to a newer light at a substantially discounted rate. Since I had been eyeballing some of their newer commuter lights and I wasn't really too keen on my ability to keep the replaced battery healthy I jumped at the chance to exchange the Stella 120 for the new Urban 500! 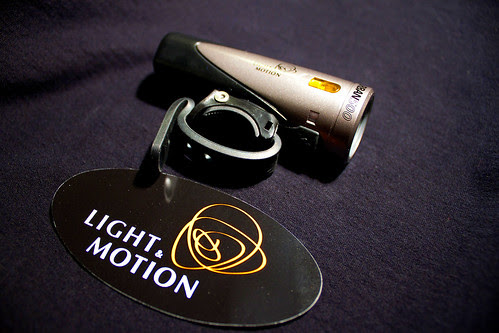 I have only had the light for a few weeks now and have only had to use it on a handful of rides but even with that small sampling I can tell that it is everything that the Stella wasn't and not surprisingly more my type of light. It's one piece design with no separate battery to mount to the bike somewhere and the use of a much more slacker friendly Li-ion battery are right up my alley and lets face it with the gray aluminum on black casing it's just dead sexy to boot. 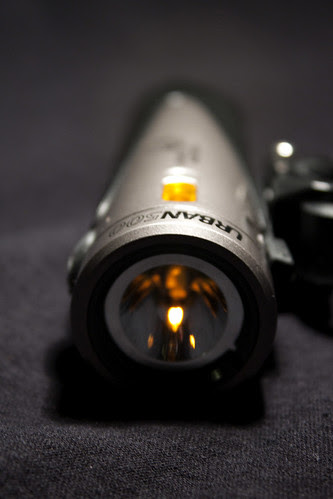 Looks aren't everything but when it comes to cycling we buy, use or wear a lot of stuff because of what it looks like or how it fits our own sense of style, sometimes despite the lack of functionality. In addition to great looks and a convenient form factor, this light is also crammed with innovative and useful features. I have always been a big fan of the mounting system that Light and Motion uses, it's simple, effective and best of all easy to remove if and when you need to lock your bike somewhere for a few minutes and take the light with you. I have never done any serious trail riding with the mount but I have taken it on a few rides through Wilderness Park and never had it move or come lose on me and as a bonus if you're looking for a second helmet mounted light the Urban 500 also comes with a helmet mount. 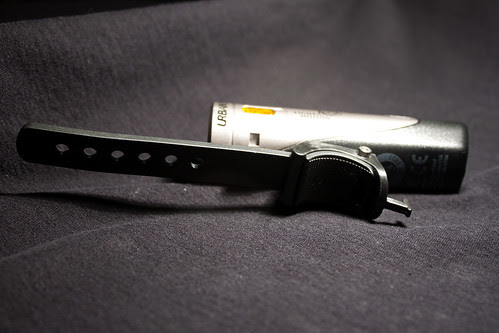 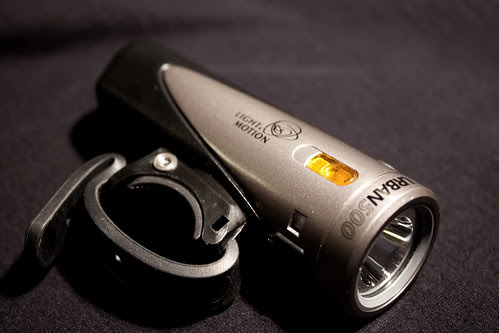 Being a light intended for commuting in an urban (i.e. traffic) environment; Light and Motion also added two amber side facing lights for additional visibility when you are traveling alongside vehicles. It makes a lot of sense from a safety standpoint but to be honest I really don't have an opinion either way but safety is always a good thing and they aren't bothersome in any way that I have noticed, they aren't over powering and do add a nice amber glow to the cockpit. 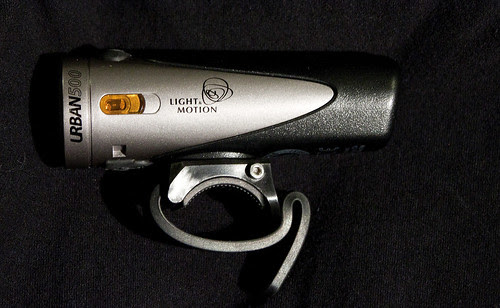 Probably the feature that I love the most, aside from the blazing 500 lumens, is the LED indicator on the back of the light that changes from green to amber to red so that you never have to guess what state the battery is in. I realized in retrospect that I probably over charged the Stella 120 on several occasions because I never knew if it needed to be charged or not, this led to me charging it for a few hours every time I thought I was going to use it. My logic was always that I would hate to be out on the trail and have the light go dead but in reality I was doing more harm to the NiHM battery than good and am probably responsible for premature battery-cide. With the addition of one tiny LED light, Light and Motion has taken the guess work out of it, simply turn the light on and the indicator lets you know if it's good to go or not. Throw in the fact that the charging time is half that of the Stella, 5 hrs vs. 10, and that it is achieved via a micro USB port under the lamp, you can charge it from either a computer USB port or a wall outlet. The latter of course is dependent on if you have a cell/iPad/iPod type wall charger with a removable USB cord because for some reason even at $159 retail Light and Motion doesn't provide you with the wall plug piece but only provides you with the micro USB cord. That might be the one hit I would give the light so far but since most cell phones, iPods and iPads now come with a wall plug with removable USB cord it's a minor annoyance more than an actual problem with the light. I have seen people posting online that the earlier versions of the Urban 500 would get extremely hot after running them for awhile, I have used mine for up to 2.5 hours at a time and the case never seemed overly warm to the touch even with non-gloved hands. Of course being winter in Nebraska it hasn't gotten much above 40 on most night rides but I would say they fixed the problem of the early versions. 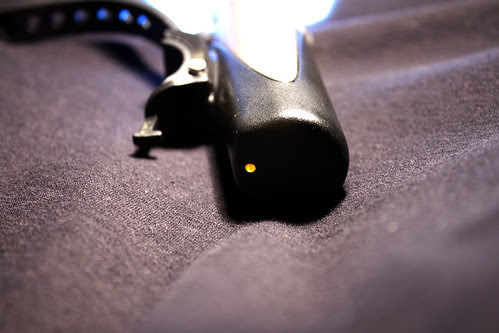 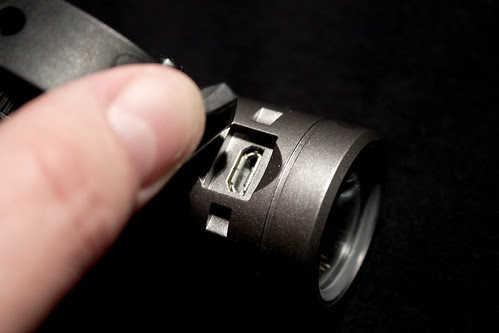 Light and Motion claims that the light will last 1.5 hours on high, whether it does or not I am unsure of at this point since I have only used the high setting a few times in instances where there wasn't any ambient light at all from a street light or other sources, I generally run the light in the medium setting to increase battery life.  I would guess that the medium setting is somewhere around 200 lumens, guess being the optimal word since I don't have any way of actually reading lumen output,  it's more of a comparison to the lights of my ridding buddies and lights I have had in the past. Medium has been more than adequate for most of my riding situations and it keeps those coming toward you from shielding their eyes and spraying expletives about how blinding the light is. I do know that with using it on a combination of medium and high I have ran the Urban 500 for more than 2.5 hours without the light dying or losing any brightness. I have even on one occasion ran the light into the red and it was still lighting the way 30 mins later when I finally arrived at home, I wouldn't recommend living on the edge and counting on that amount of battery being left every time but it is comforting to know that the light isn't going to just quit on you once the LED turns red.

Overall I would recommend this light to anyone looking for a lighting system for commuting or even light trail riding, it really is a vast improvement over the Stella 120 I purchased just a year and a half ago and I am a big fan of Light and Motions lighting pattern they use on their lights.
Posted by Rydn9ers at 8:55 PM