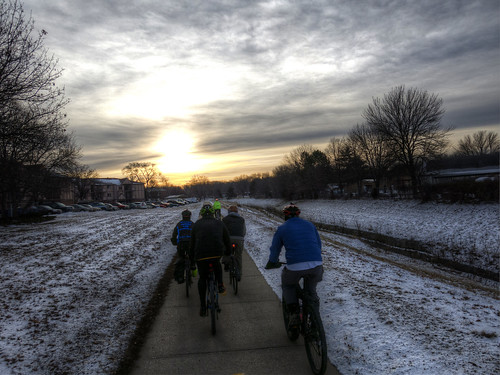 Joined up with the guys and gals from the Great Plains Bicycle Club yesterday for the annual New Years Day Ride, I believe this is the first one of these I have done. 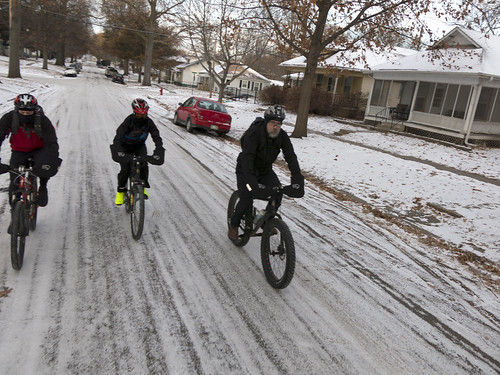 Drove over to Gary's at oh my god it's early on a holiday o'clock to meet up with him and Janine... we rolled on to A St. and picked up Kyle on the way to the Zoo. It was down right cold to start this ride. 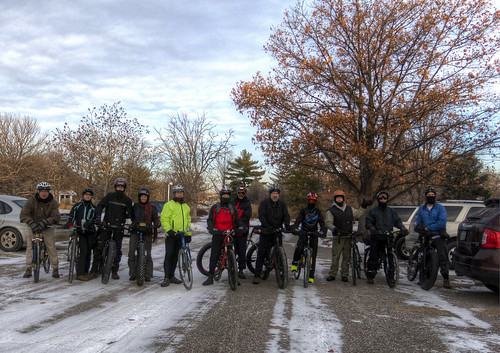 Despite the cold there was a really good turn out at the Zoo, this was one of two larger groups that would rendezvous at the Village Inn for breakfast. 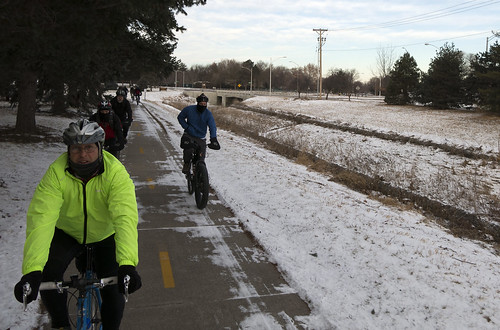 Leaving the Zoo and heading to VI, the bike paths were in fairly good shape for the most part. 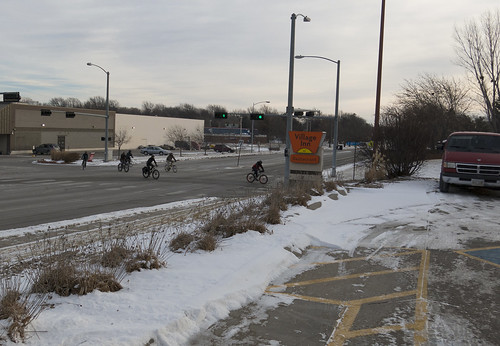 More cyclists showing up at VI.

Huge turnout for the ride, I believe the total count was right around 30 people... out waitress was fantastic given the large group but for a moment it almost looked like the manager was going to have a stroke when we all started pouring in. It was literally like a bus full of people just showed up at your business looking for breakfast. 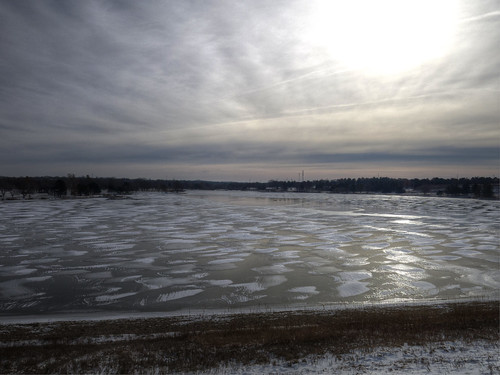 After warming back up and filling ourselves with eggs, bacon, pancakes and coffee we suited back up and rolled on to Holmes Lake, lake was mostly frozen but didn't look frozen enough to ride on unfortunately. 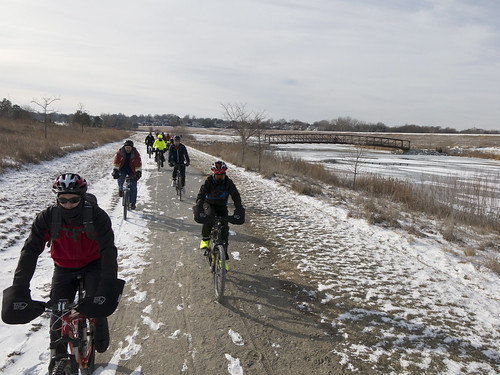 Since we couldn't go across the lake we had to go around it. 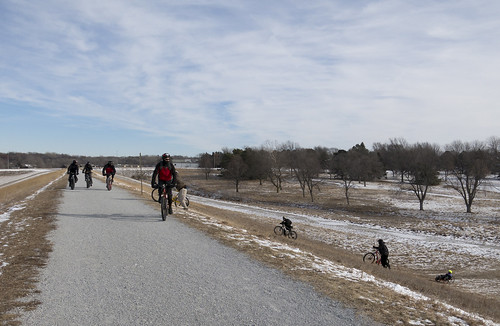 Riding up the side of the damn was not at all easy, just enough snow to make traction hard to come by, lots of walking up it that day. Barely made it up myself with the fatty, once your rear tire started to slip you were done for. 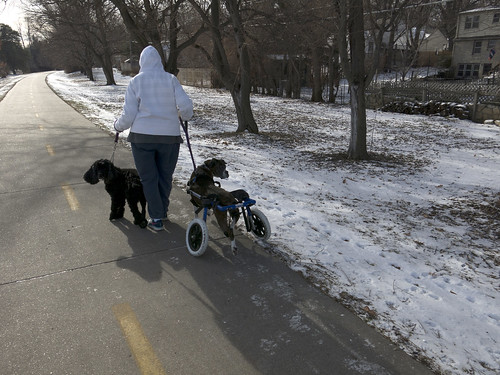 Once the official ride was over Gary and I decided to roll on down to Wilderness and get a little snowy single track. Headed down the Rock Island trail and came upon this guy, he looked like he was having a blast playing in the snow. Amazes me how quickly most animals accept and adapt to many of the handicaps that they are faced with. 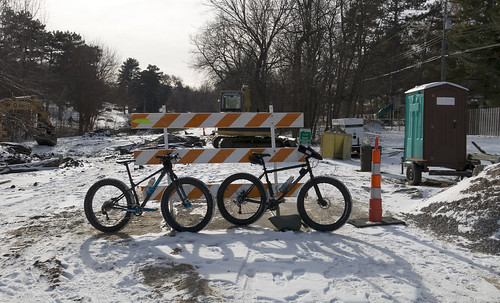 Haven't been down the Rock Island trail in sometime so it was a bit of a surprise to see that it was closed, I originally thought that perhaps it was the beginning of what has to be a lengthy closing when they start the bridge construction on Sheridan Blvd. Luckily it was something else that caused the closure and a short detour got us back on track. 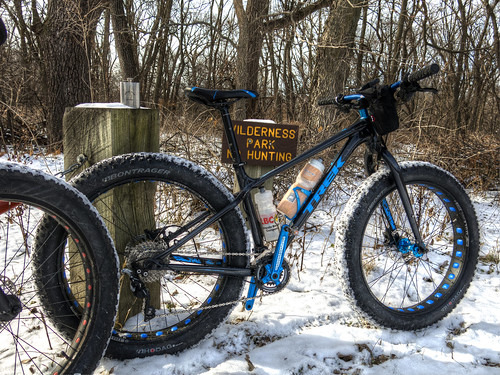 Wilderness Park itself was in pristine conditions, snow on the ground and just enough bike traffic that the trails seemed almost groomed and riding them on a bike with almost 4" wide tires was considerably more enjoyable to pedal than a normal narrower mountain bike tire. 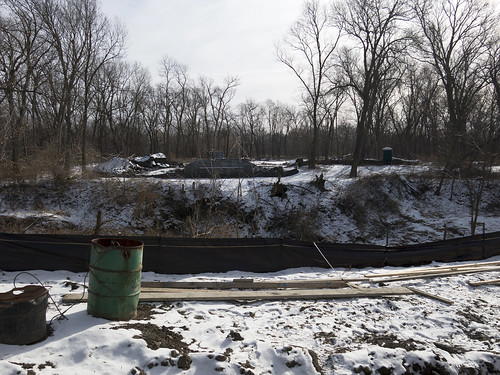 I've been through Wilderness a few times since the bridge deconstruction/reconstruction began but it's always been in a much larger group so I hadn't had an opportunity to see it in person. Coming along nicely, not sure if the bridge is going to be all one piece or not but I am hoping so otherwise it could be 2016 before it's ridable. 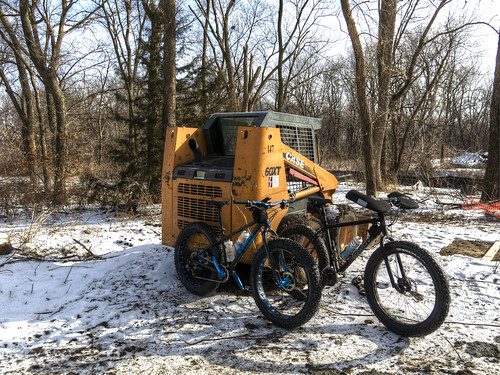 Lots of cool construction equipment at the job site which makes for some good photo opportunities.

The down side, if there is one, is the new super highway down the middle of what used to be single track. The park will recover though, so in reality it's just a minor issue that will be gone a few years once the construction is done. Had a great time hanging out with the guys and gals from the GPBC and seeing that many dedicated people come out for  a chilly ride, hopefully 2015 will bring a lot of these types of great rides.