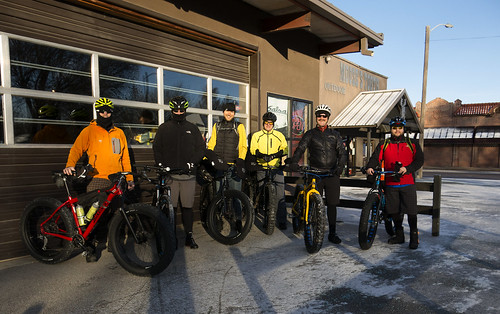 I had been toying around with the idea of getting a "snow" bike for years now, back before they were as mainstream as they are now, but I was having a hard time reasoning why I needed a bike specifically made for riding in snow. There are years that even here in cold ole Nebraska we don't really get much in the way of snow, this year being a prime example, so it was always difficult to justify purchasing another bicycle that as name implies would potentially sit for at least 6 months on even the snowiest of years. I think one of the main reasons that fat bikes have really taken off is that companies have removed "snow" from the name and replaced it with "fat" and then started marketing it more as a do everything, go anywhere bike. I don't think that fat bikes have become popular because all the big companies are making them, I think all the big companies are now making them because once people realized that they could ride their fat tire bike all year round the popularity skyrocketed, the once hard to justify "snow bike" now became just another must have mountain bike you could ride year round; this one just has really big, bouncy, smile inducing tires. I recently joined the fat bike club and am very happy that I did, they are really amazing bikes that have opened my eyes to some of their possible applications that do not include any snow at all... although snow is still one of the things they do really well.

Yesterday was the inaugural Saturday Morning No Drop Fat Bike Ride, luckily for me the great folks at Cycle Works have allowed me to hijack their Facebook page from time to time and use it to organize these types of group rides and reach more people than I would otherwise be able to; because bikes are always more fun with friends. We started the ride with 6 and picked up another 3 on the way, I was super stoked to have that many come out, wasn't sure what we might get for turn out being Christmas weekend, I was more than pleasantly surprised. 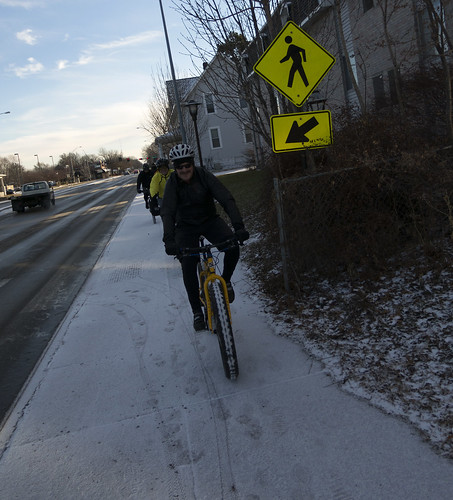 Temps were in the 20s at 9 a.m., the sun was out and we even got a light dusting of snow, conditions were almost perfect for riding fat tire bikes through Wilderness Park. 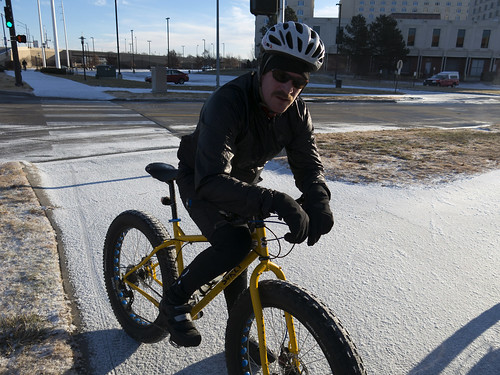 Fat Bikes probably won't make you any cooler than you already are but they certainly won't hurt either as seen here by this "cool like the other side of the pillow" lean. I can attest that they are conversation starters, while they might be well known in the cycling community (love them or hate them) they are still relatively unknown to the non-cycling population, people just seem to be in awe of all that rubber and will often ask you about the bike or want to take a picture of it to later show their friends. 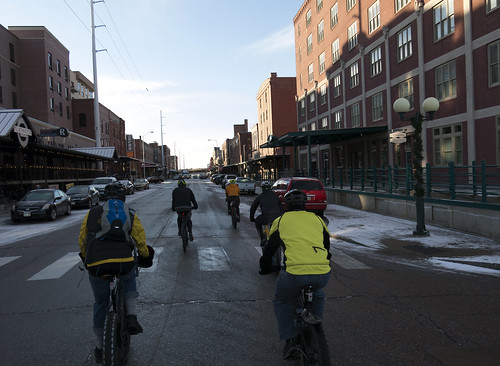 Rolling through the Haymarket 5 Fatties deep, it was kind of cool listening to the sound all those knobs rolling on the pavement as they echoed off the urban canyon walls. 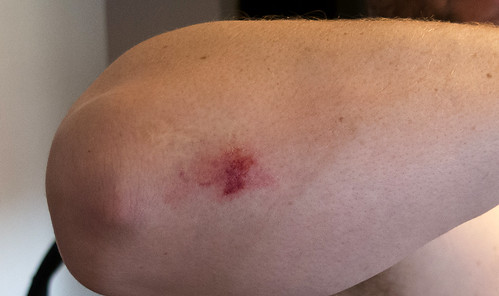 Getting to the park was more treacherous than riding in it as some of the streets were slick from the freezing drizzle that started before the snow, had myself a pretty good wipe out going around a corner just getting there. It doesn't look like too much from this picture (and I'll save you from seeing the one on my hip) but it definitely got my attention, today they are less sore but a bit more stiff after having 24 hours to set in. 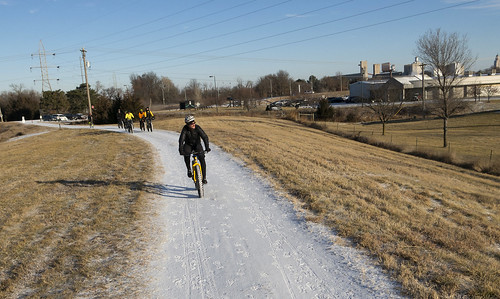 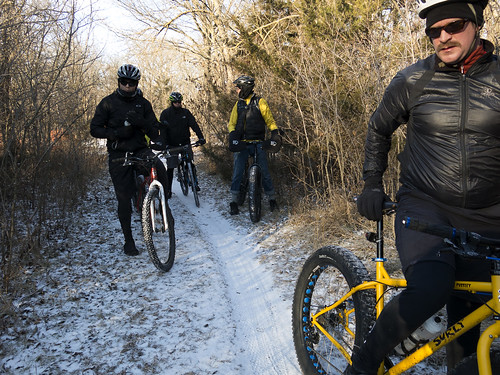 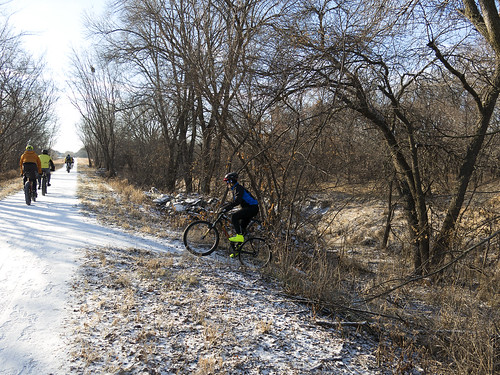 For the most part Wilderness Park was in great shape, the light snow covering the frozen mud helped considerably with traction but it also helped to hide some of the ice spots underneath, by the end of the ride I was not the only person to become reacquainted with the ground. 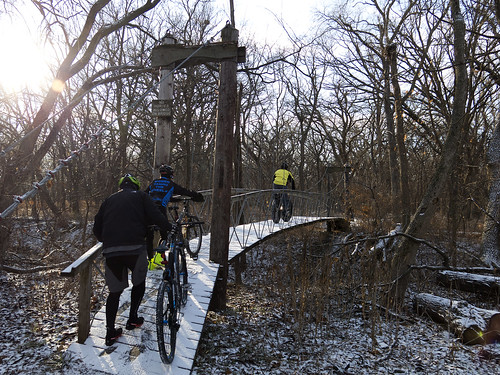 The snow did not help on the wooden bridges at all, especially this one, the going was pretty slow and slick, even walking up that slight incline proved interesting. 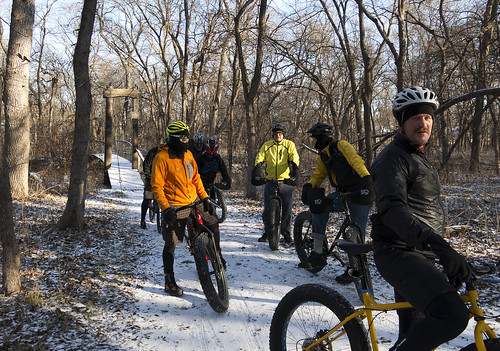 It was touch and go there for awhile but we all made it to the other side in one piece. Whew!


The two water crossings on the back side were a little sketchy but they were tame compared to the swamp section, the almost frozen water/mud combo was probably the most unnerving... well except for these two crazy fools. The rest of us opted to play it safe and walk along the edge, I'd already had my spill for the day and wasn't looking for another and bringing a muddy bike home to an apartment will sometimes get you killed. Looked like fun though, actually the entire ride was a blast and save for a one or two other people we pretty much had Wilderness to ourselves. Our timing was perfect as well, even though the temps were still well below freezing at 11 a.m. the sun was just starting to make the trails a little soft when we finished up, the fat bike gods were smiling down on us this day. 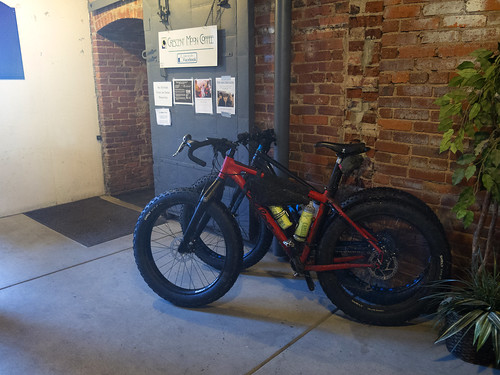 As is usually the case once the ride was over everyone scattered in the general direction of their perspective homes, Tyler and I decided to stop in at Crescent Moon Coffee on the way back to Cycle Works for a little warm up and some delicious coffee, an excellent choice. 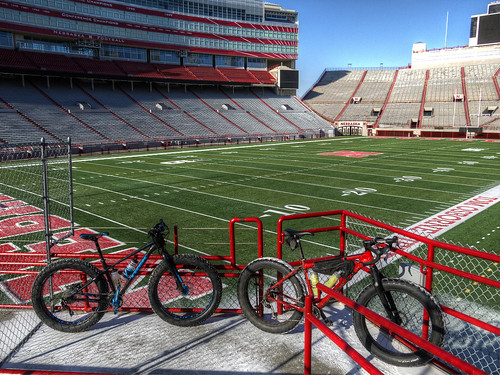 Also decided to take a little Memorial Stadium detour as well, not a bad place for a picture if you ask me and Tyler's Mukluk matched perfectly with the motif of the stadium.

The ride was definitely a blast and the second installment is already posted as an event for the 10th of January, not sure how many of these we will be able to get in this winter with it being so unusually warm and wet. With any luck we will be able to parlay the winter rides right into the usual summer time group rides without missing a beat.