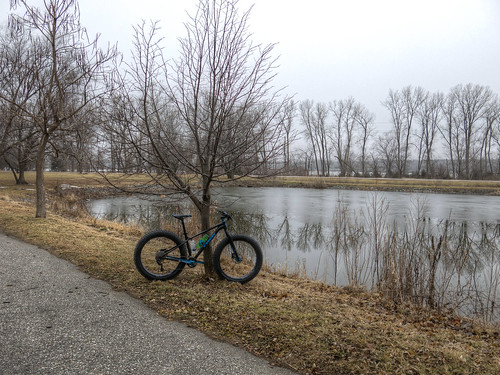 Weathers been in a cycle of fog, overcast skies and temps hovering just above freezing... today was no exception so decided to do a little gravel and B road riding. Met up with Tyler out at Schram State Park and headed out from there. 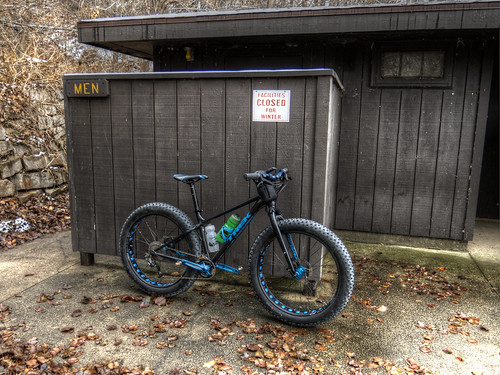 Kinda needed to piss before the ride but I guess toilets are only for warmer times, pretty inconsiderate of my bladder to not plan ahead, almost got frost bite on the little guy when I had to resort to watering the vegetation around the corner. 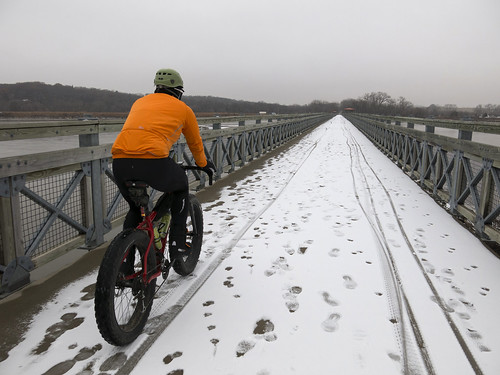 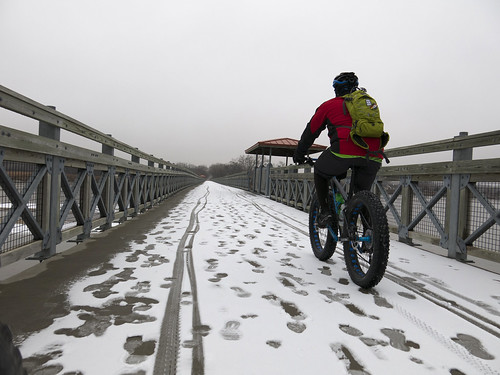 Seemed like Platte River was the dividing line between pretty much dry and some accumulated snow, from the looks of the tracks on the bridge we weren't the only ones with gravel on their minds. 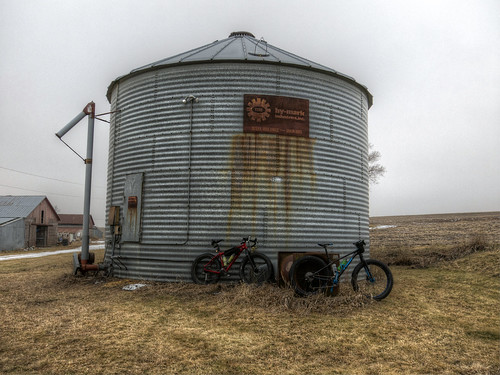 I guess putting a galvanized sign on the galvanized silo is just a little be too costly, oh well makes for a more interesting picture that way. 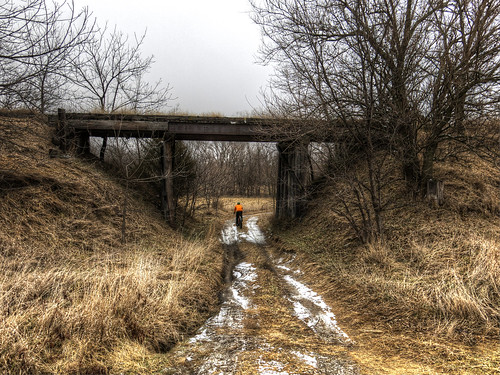 Then it was time for some minimum maintenance roads. 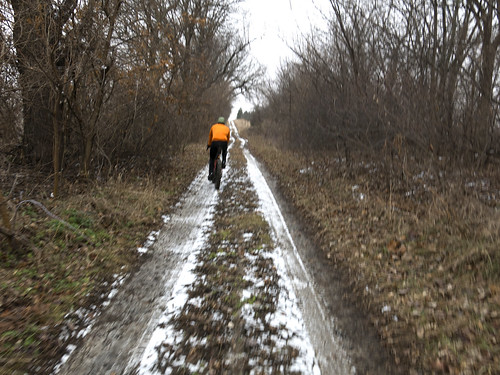 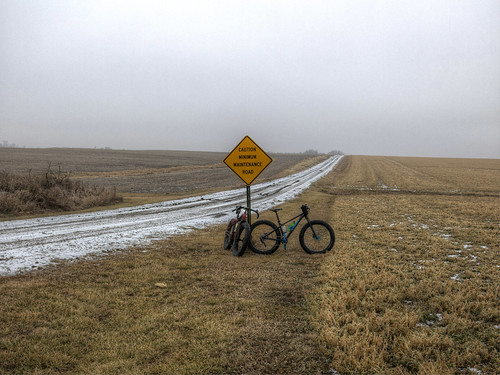 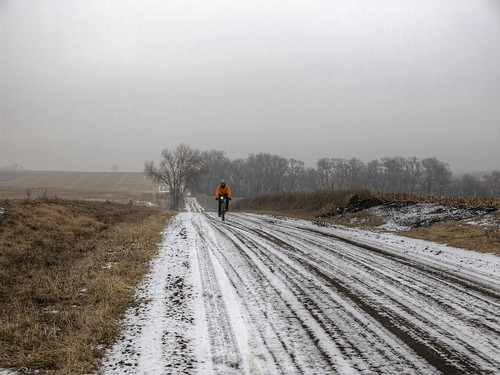 The first couple were mostly frozen and a ton of fun to ride... 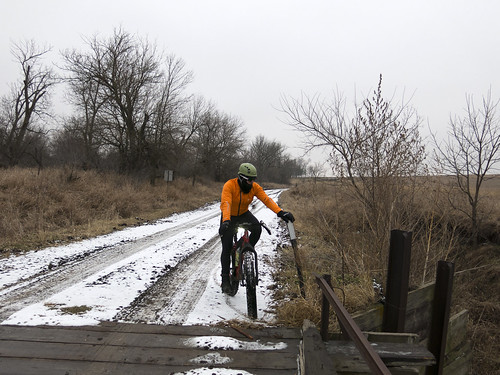 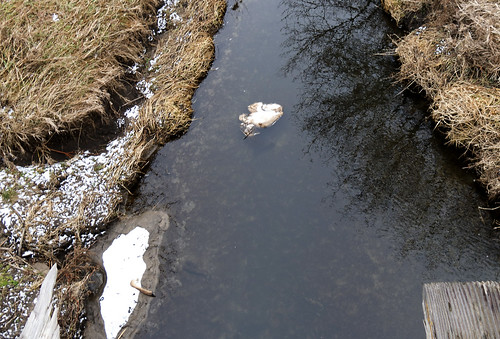 Rudolph!?!? Hopefully it's just a normal deer and not one of the reindeer, Santa might be a little late if it is. 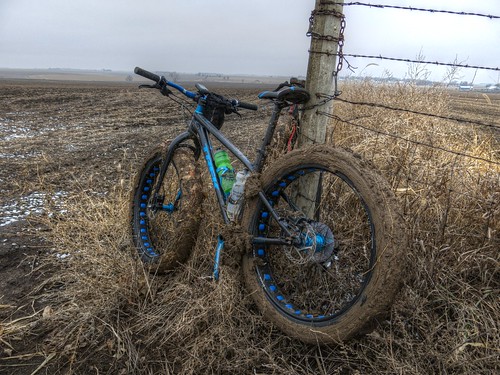 Unfortunately the temps started climbing just a few degrees and it was  few degrees too many, just ridding along and all of a sudden BOOM, peanut butter mud and it packed on quick! The good part was that we were only about a quarter mile in on this particular minimum maintenance road, the bad news was that the mud had a snowball effect and just kept piling on until the rear tire was locked up but good. So it then became the 1000 yard fat bike push, thing managed to pile up at least a good 30 lbs of mud before it locked up making carrying it not really an option... since I still had to walk on that same peanut butter mud. 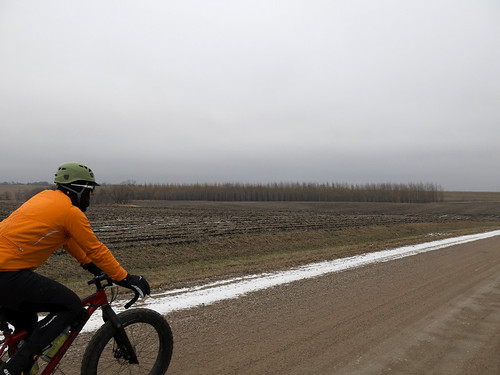 Took us about 45-60 minutes to get the bike back to the gravel and enough mud cleaned off so that it could actually roll... and then it was still slow going for awhile as things didn't want to roll quite as smoothly while the mud was shedding left and right. We must have looked pretty pathetic out there as we had one truck and a sheriffs car stop to make sure we were alright and didn't need help. 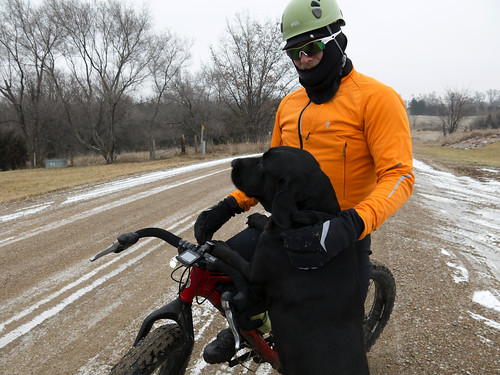 We even made a new friend along the way, nice dog but a bit odd as he was doing some growl/purr thing while being pet... wasn't sure if he was happy, mad or just wanted to bend you over the bike and have his way with you. 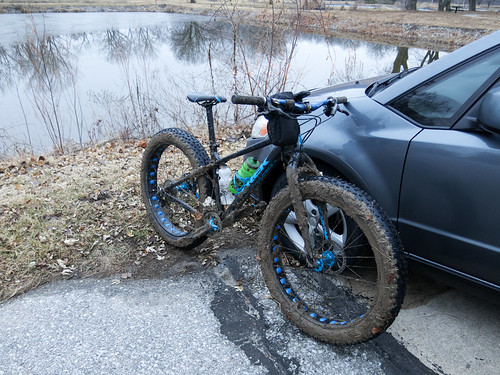 Most of the mud seemed to fling itself off during the 15 mile ride back to the cars... most but not all of it. 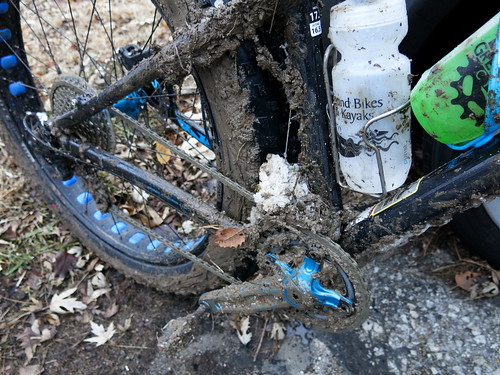 Figured out that if there ever was a bike that needed to be a 1X10 the Farley is that bike, mud just seemed to hit the spot where the front derailleur, down tube and chain stay met and pile up there. With such close tolerances it was a bitch to get off even with a small stick, might have to figure out how to drop the derailleur on the front. 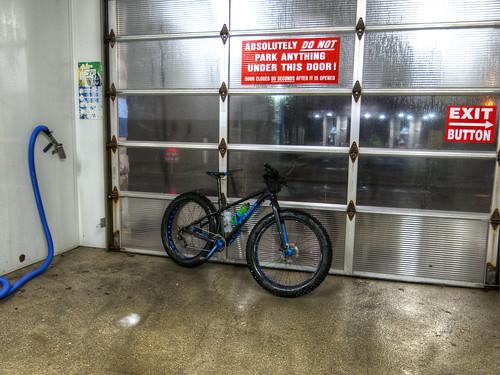 Not wanting to be strung up by my testicles and spend the better part of next year in the dog house, the first stop when I got back to civilization was the car wash to rinse off the rest of the built up Nebraska top soil before heading home. I don't like to take the bike to the car wash but since it's the middle of winter I didn't really have any other option. Being careful to avoid spraying the nozzle directly on the seals and bearings it was a slow process but eventually the mud disappeared and a Farley was still underneath. Going to need a good once over and lots of lube tomorrow but she didn't look too worse for wear despite spending a few hours caked in mud. Next time I'll have to pay better attention to temps and how nasty the minimum maintenance road looks, although even with all that mud we weren't making any real noticeable ruts, it just kind of stuck to itself until you were fudged.