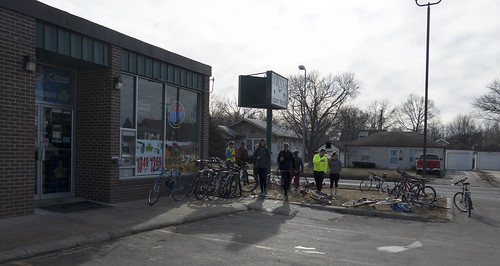 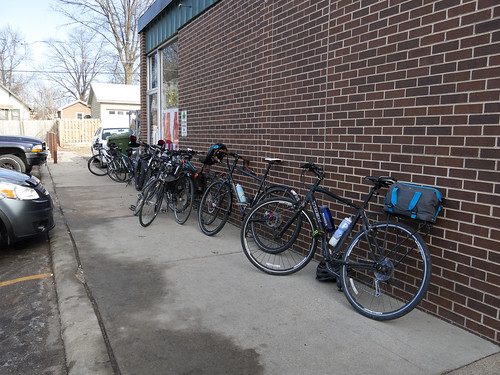 Yesterday was the first ever Tour de Brrr ride, the ride is put on by the same great people (Cycle Works & Moran's Liquor Works) who bring us the Tour de Brew LNK rides. When this ride first popped up on the radar several weeks ago the temps were consistently around 20° give or take a few degrees plus or minus, so Tour de Brrr seemed like a more than fitting title for the ride. Fast forward to yesterday and the temps were much more spring like than winter like, the high on the day being 53°. If it weren't for the brutal 25-40 mph winds it would have been a perfect day and the number of riders reflected that as there had to be at least 100 cyclists. 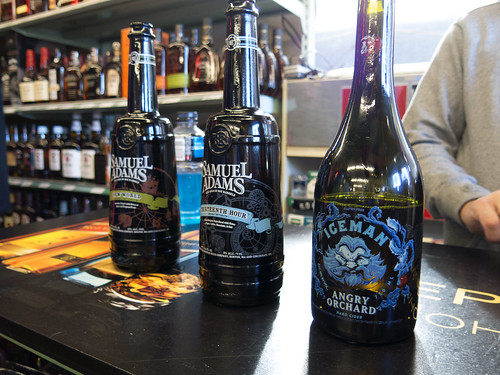 Coming from Omaha the winds made for a fun drive down with two bikes on the roof rack but we made it to Moran's without incident to get registered for the ride. One of the changes that has been made to the ride (for the better IMO) is that instead of being free they now require a $5 donation to participate. Since the rides are all about fun and raising money for local non-profit organizations I personally didn't have a problem with paying the small amount to ride. Others might not see it that way and might have a problem with the new format but it will most likely only be those just looking for cheap beer and prizes, those not interested in also helping out locally that might be turned off by the $5 "cover charge". Maybe losing those people isn't such a bad thing if they can't see the benefits of raising money and making all the volunteer hours worth the effort it takes to put on these great rides... anyway, back to the ride...

After registering  it was time to try the beer, I have had the other two previously so opted to only sample the Thirteenth Hour and it did not disappoint, it was a bit on the fruity side for a barrel aged so if you are a fan of beers more on the fruity side this might be a good one to pick up. 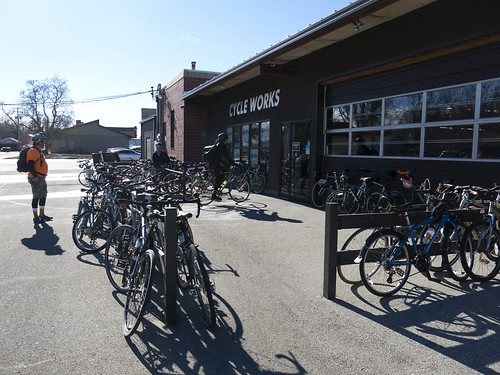 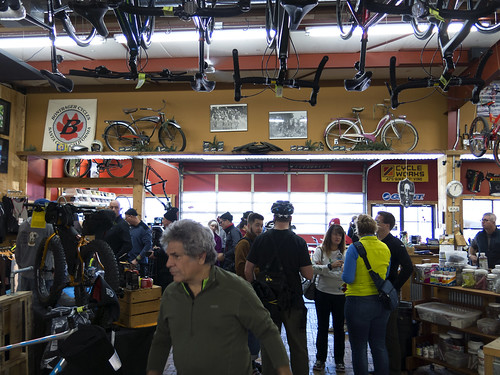 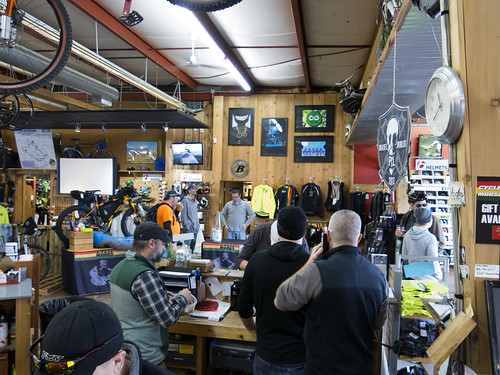 Having registered and sampled the Thirteenth Hour it was time to head on over to Cycle Works, we were one of those early to arrive at Cycle Works and a crowd was already starting to gather. The number of riders made it seem like we were still in the dead of summer. 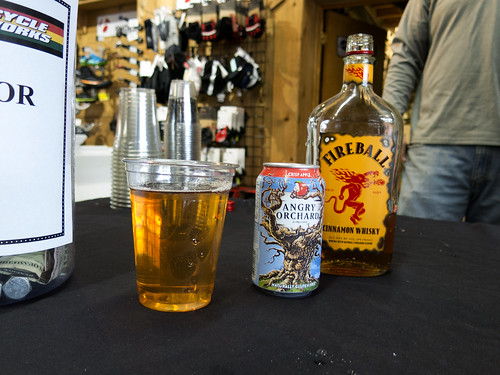 One of the concoctions that was available at Cycle Works was a mix of Angry Orchard hard cider and Fireball Whiskey aptly named "Angry Balls", with a name like that how could you not try one. 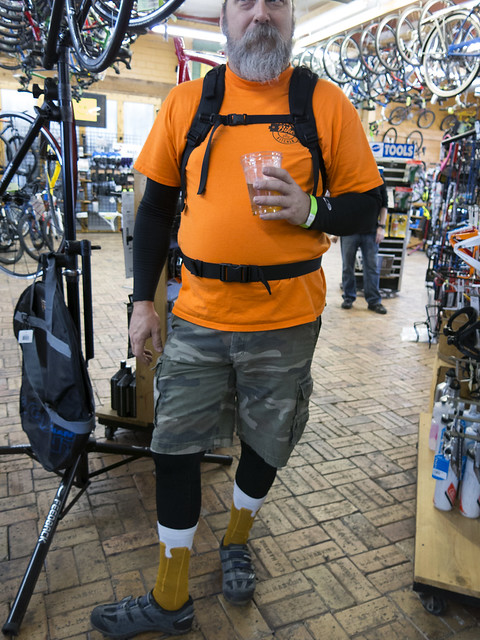 Caught up with Gary at Cycle Works, he fittingly wore his beer socks for the ride... while holding his angry balls. 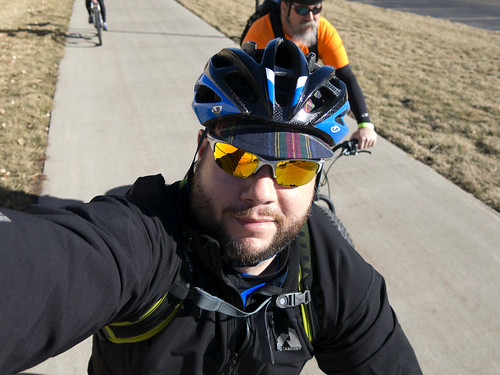 After our fill of adult beverages, off we went in search of food... man it was a gorgeous day. Was able to wear only my Rothera Cycling Glascow cotton flannel cycling cap, first time in weeks I haven't had to wear some sort of ear/face protection.

I decided to head down to the Rail Yard, while I was riding down there I kept noticing that these two people were following me... I'd turn right, they turned right; I went left, they went left. Since I figured I wasn't going to lose them we all decided to ride together and find a place to eat, the rides are also about meeting new people and making friends after all. 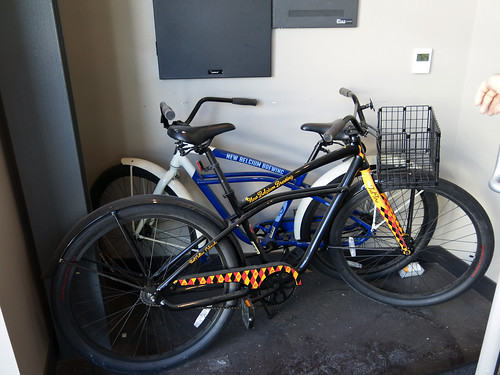 We decided to head to Longwells as they have some great food and a decent selection of beer... and these two New Belgium bikes apparently. Not sure what I would do with one or how often I'd actually ride it but it would be cool to win one of these sometime. 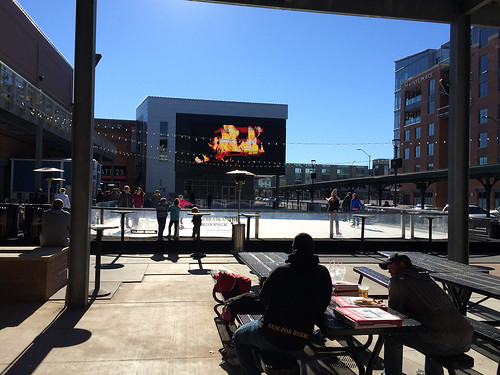 The last and only other time I've been to Longwells was on a previous Tour de Brew LNK ride and we all sat out here, wasn't an option today. Dang skater punks and their frozen water... ice skater punks even, worst kind. 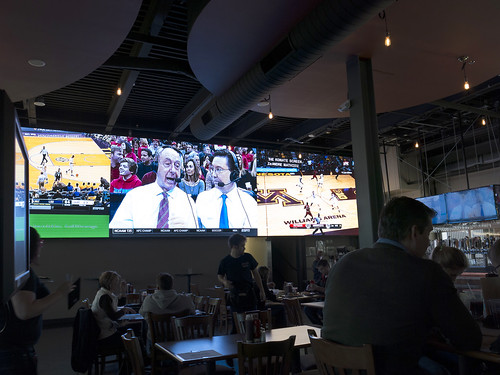 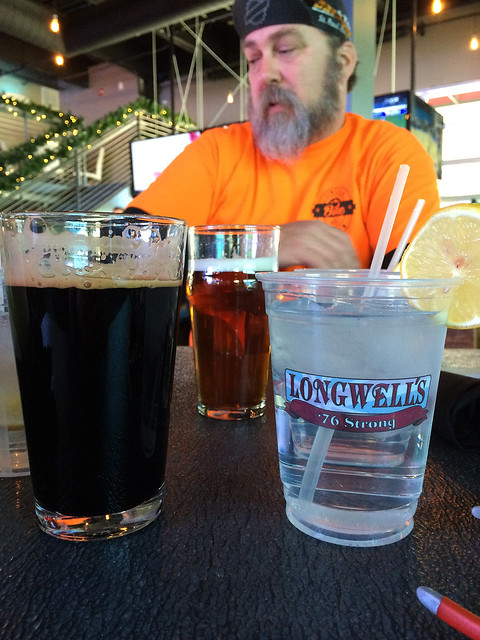 First time sitting inside, it was kind of nice in there... huge T.V.s and tasty ice cold beer. 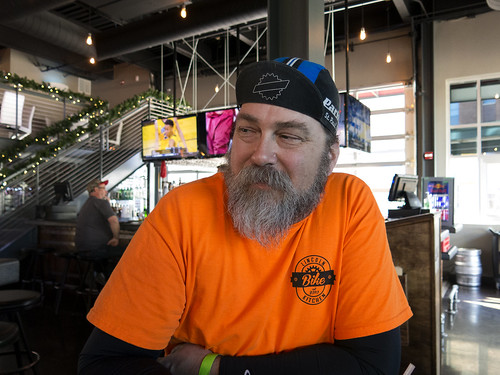 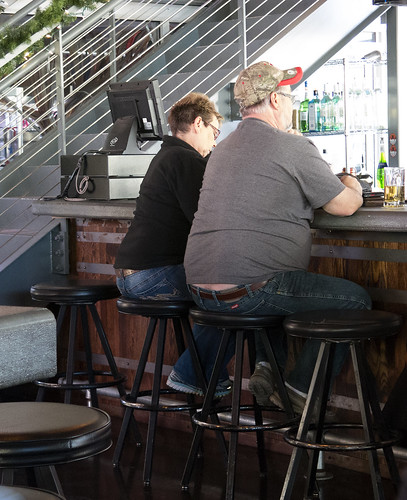 Oh, sorry I asked... remember kids Crack is Whack... in all it's forms. 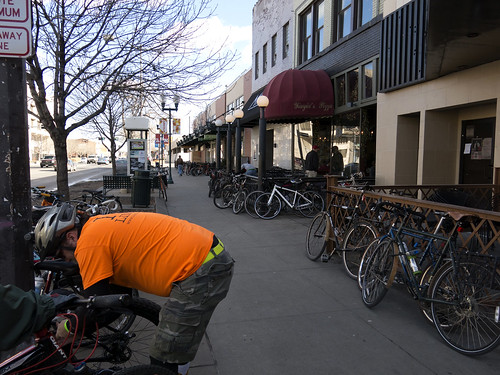 Because we all three of us share one brain, every one of us had the Cubano (to be fair though it is amazing) at Longwells before heading onto Yia Yia's  for the final stop and the prize raffle. By the time we got there the place was already packed with fellow cyclists. I often wonder what the unsuspecting citizens of Lincoln think when these rides converge on the downtown area and there are dozens of bicycles and cyclist everywhere; my guess is they think "It's time to get a bicycle"! 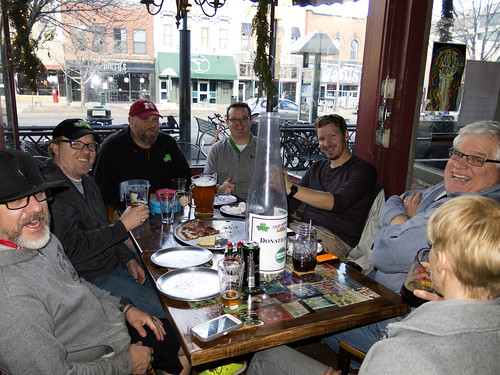 Front and center right after you get in the door were the Bahms and crew, our hosts and prize emcees for the afternoon. Look at all that natural light coming in through those big windows... 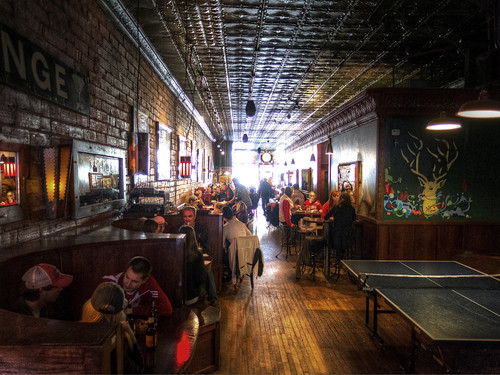 Because we were late comers we had to sit way back, deep in the bowels of the beast where natural light goes to die. I didn't even know Yia Yia's extended that far back, I swear it felt like we were closer to L street than we were to O street. :) 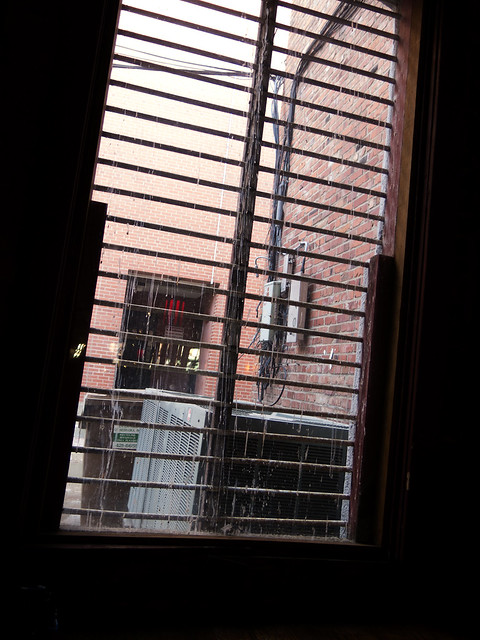 We did have an excellent view of the alley through this bird poo covered window and the creeper in the mirror  was a nice touch, so the ambiance was to die for back here. 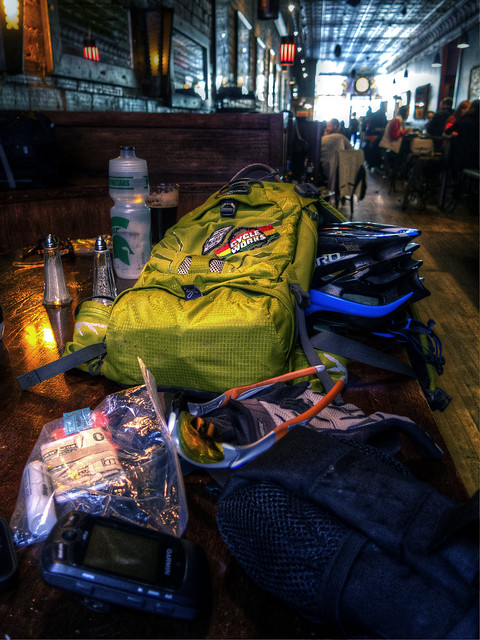 It did allow us to sprawl though, the corner booth waaaaaaaayyyyy in the back of Yia Yia's is huge if you ever come in with a big group, there was plenty of room for the three of us and all the crap I take on these rides to fit comfortably. It's like I'm running away from home or something with all of the stuff I carry. 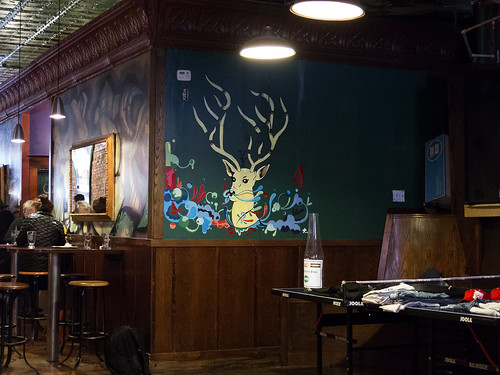 In addition to the creeper and the poo window it also gave us a great view of this smoke snorting deer and most importantly a quick route to the bathroom which is always a plus when drinking. 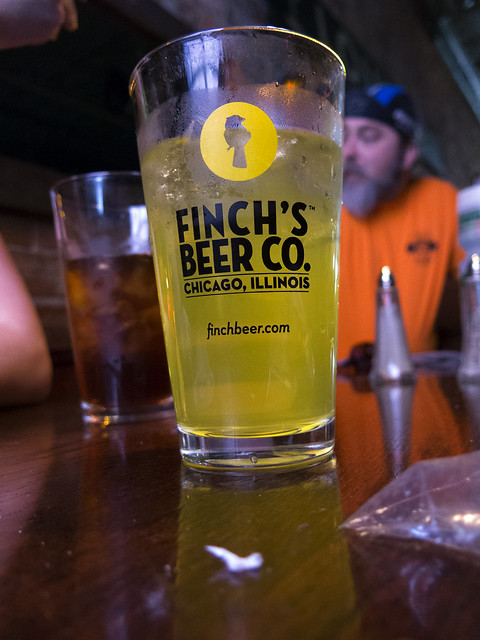 Speaking of drinking, after downing an 11% ABV  Deschutes Abyss at Longwells the plan was to switch over to something a little more liver friendly in the form of Mt. Dew. Figured this way the liver and diabetes could fight over who'd get to kill me first. 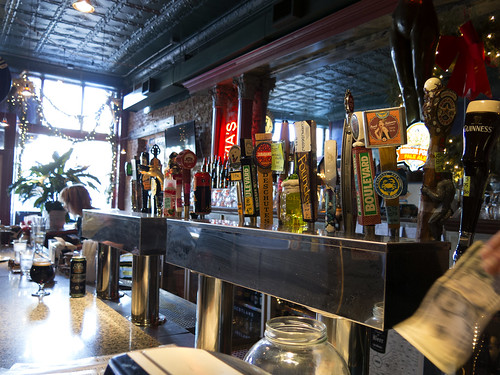 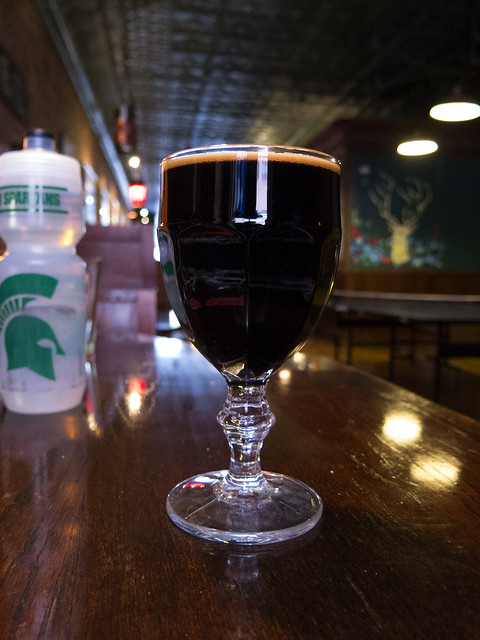 I swear that the plan was to stick to non-alcoholic beverages... until we found out that they had Goose Island's Bourbon County Vanilla on tap. This rich, dark, thick, 14% ABV offering is one of, if not the best beers I have ever had; it's so good it is almost impossible to do it justice with words. If you have the opportunity to find it on tap, which isn't easy to do, you need to try it. 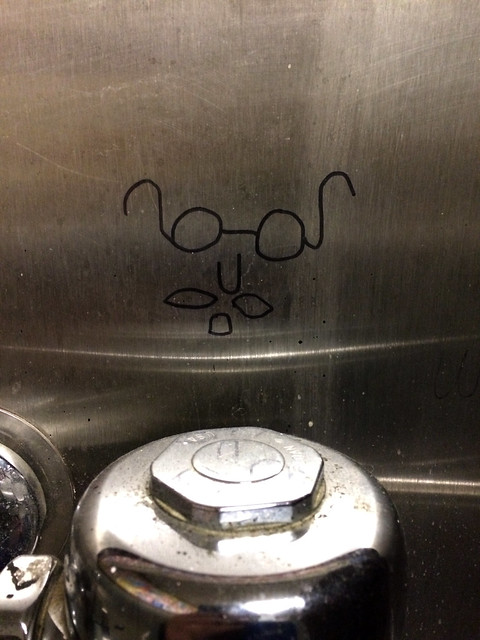 It wasn't long before that quick route to the bathroom paid off, after all the water, beer and Mt. Dew it was time to visit the loo. If you were as disturbed by the creeper in the mirror as I was, the one in the bathroom was down right unnerving. The spectacled, soul patch wearing hipster was straight muggin my junk the whole time; a bit rude but you know, who understands those hipsters in their glasses and tight pants with  their bushwa attitudes. 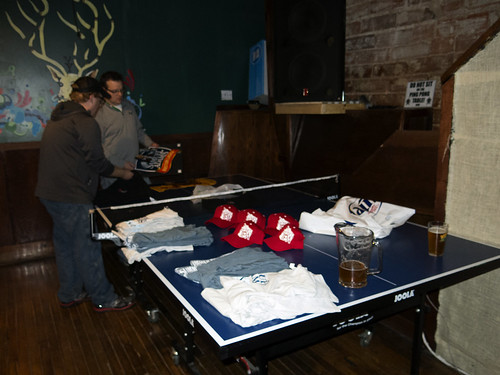 Having avoided making direct eye contact with the bathroom attendant I safely made it back to the table just in time for the prize raffle. In true "me" form I went 0-3 on the prize winning. 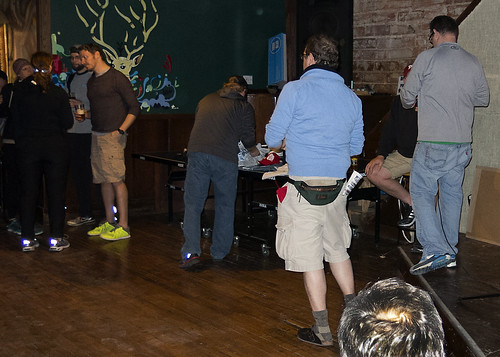 This guy however was bi-winning, he had a winning ticket and a sweet fanny pack! I jest but it wasn't too many years ago when I was known to rock the fanny pack on rides from time to time, not sure why they get such a bad rap they definitely do have some utilitarian uses while riding a bicycle... but not being able to give up that many cool points, the fanny had to go in favor of the back pack. 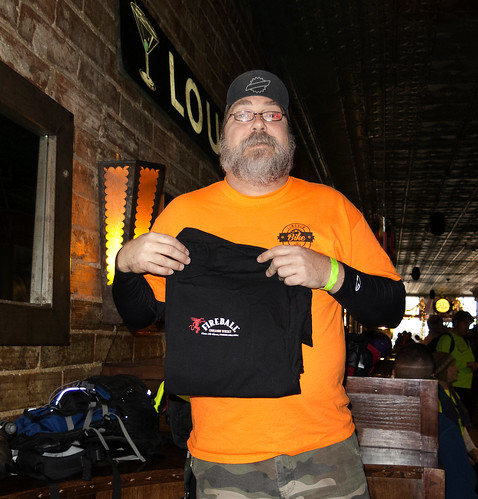 Gary was the only winner from our group, seems like he wins something at every one of these rides. I guess some people just have the magic and some don't and apparently I'm more T-Magic from his last  season rather than the T-Magic from the first three seasons. 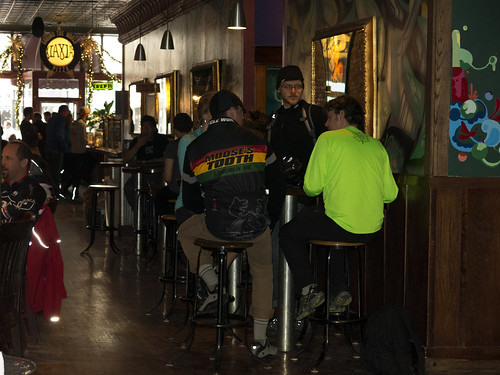 Since I didn't win I might have briefly entertained the idea of mugging this dude for his Cycle Works/Moose's Tooth gear but in the end reason prevailed and I figured losing was bad enough without getting my ass kicked on top of it. 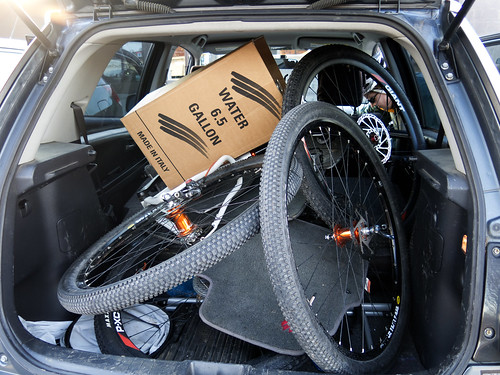 Inexplicably the wind managed to increase over the course of the day rather than subside, not wanting to test the strength of the roof mounts on top of the car we instead tested our Tetris skills and the bursting strength of the back of a Suzuki SX4 by cramming two bikes inside for the ride back. Luckily the carboy in the box was getting dropped off shortly after loading the bikes so we were able to free up some room. Couldn't have asked for nicer temps for a ride in mid January though so I guess that was the trade off for the wind. Can't wait for the normal rides to start up in March, should be another good summer of great rides.