ThNNDDR - First of the Year 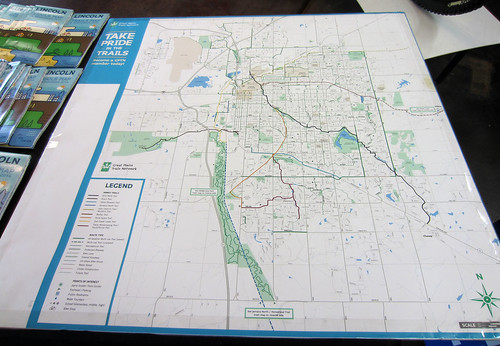 Got to Cycle Works a bit early so I decided to snoop a little at the stuff they were setting up for ladies night, new trail maps are out. Miles and miles of great trails in the Capitol city, you should get a new map and explore a trail you might not have known even existed. 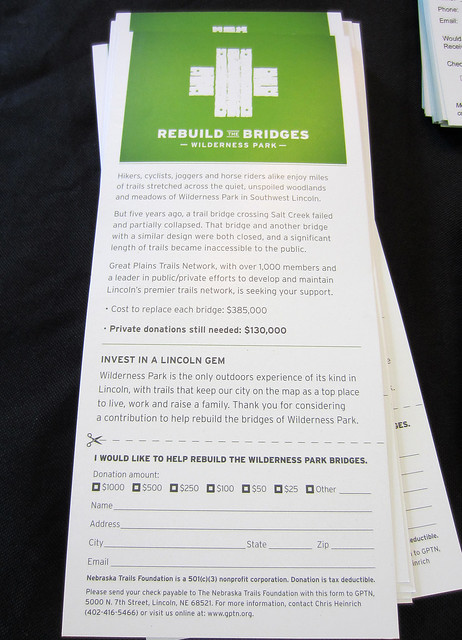 Speaking of things you should do, if you ride/walk/crawl or visit Wilderness Park you should pick up one of these and donate whatever you can to help replace the two bridges to help make the park whole again. 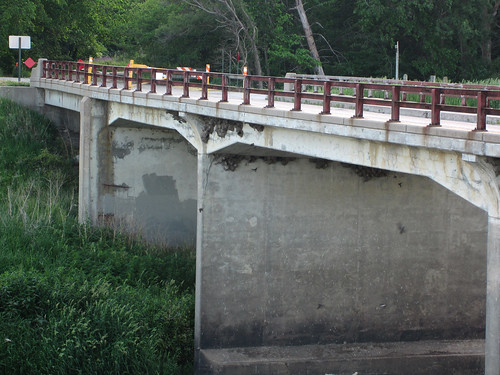 Got to the Van Dorn trail head with a few minutes to kill before Gary was supposed to meet me and noticed that the swallows were working diligently on making their mud nests underneath the old Park Dr. bridge. Always thought it was pretty amazing how they get that mud to stick up there like that as the hover in mid-air. 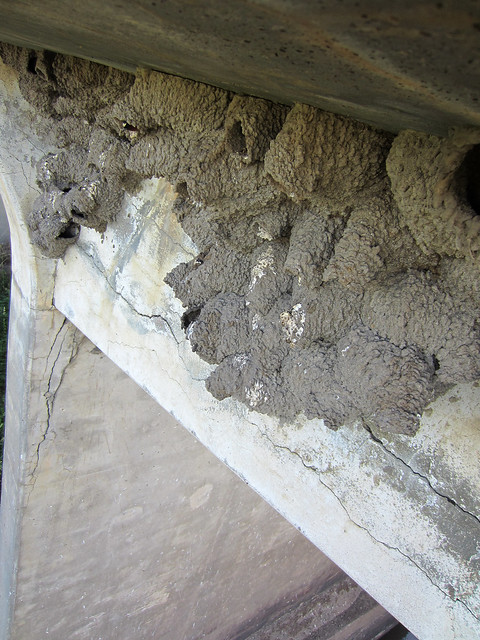 Went in for a bit of a closer look... 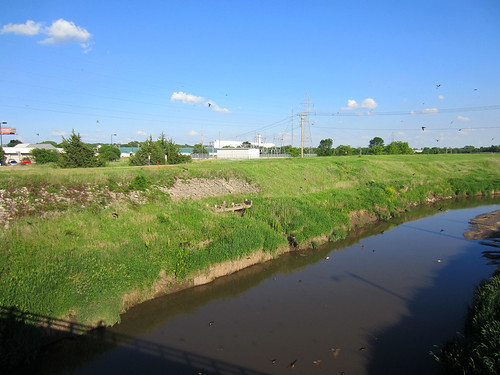 ... the swallows however weren't as excited by the concept of someone taking a closer look as I was and started flying in circles, so I decided to leave well enough alone. 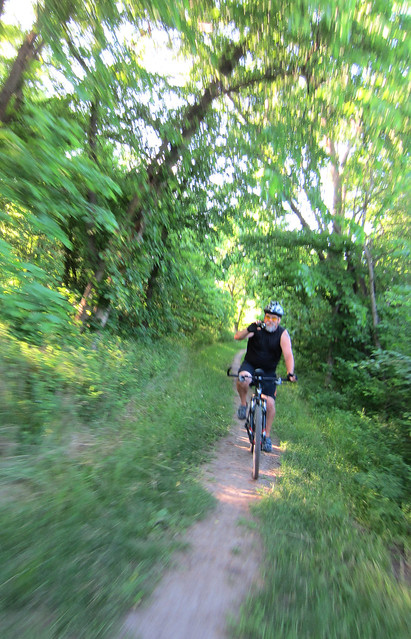 Which was alright because Gary had shown up and it didn't look like anyone else was coming so we decided to set off as a group of two. Taking pictures while riding one handed, twisting through the trails of Wilderness Park at speed isn't as easy as it sounds but I got this nice picture of Gary getting a picture of me, getting a picture of him as he rides at the speed of blur. 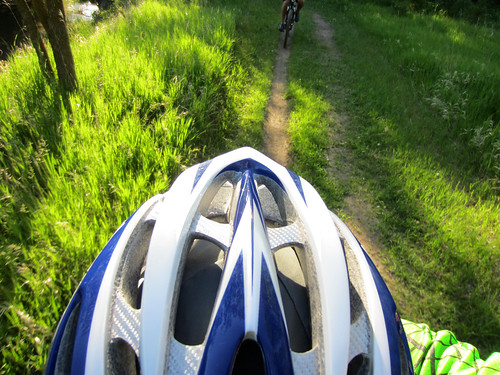 I do end up with a lot of random, unusable shots of trees, blurry indescribable things and lots of pictures of my helmet and/or shoulder depending on the angle but look a that helmet. Those lines, the way the blue and white come together and those little pieces of reflective, fake carbon fiber looking bits; who wouldn't want endless pictures of such a beauty... and then there's Gary's wheel photo bombing an otherwise perfect picture. 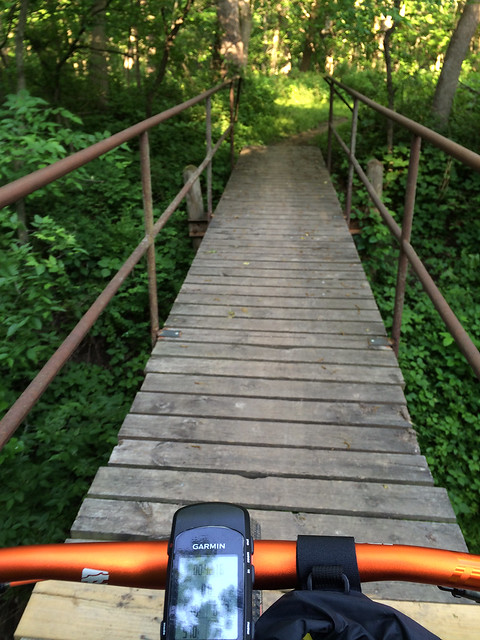 In retrospect it probably was a good thing there wasn't a big group of us out there last night, while 85-90% of the trail is in really good condition there are a few spots that needed to be ridden around and one hike a bike section which could have been interesting in a large group. The mosquitoes were not very forgiving anytime you stopped to circumnavigate one of these sections, blood loss may have become a factor on a larger group with it taking longer to cross and get back on the bike. 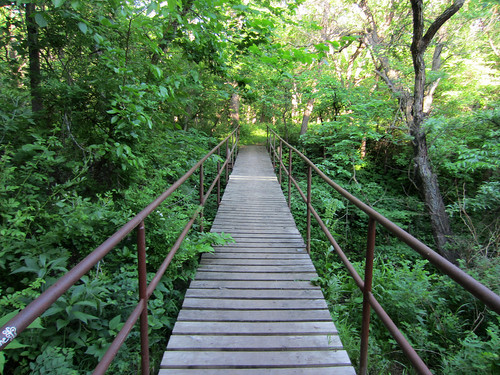 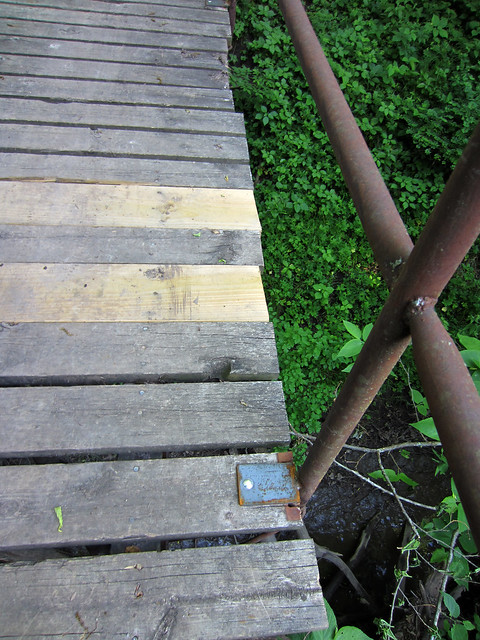 On an extremely positive note, the vandalized bridge is fixed with two functioning rails and lots of new welds and wood pieces. Glad to see it was able to be repaired in such a quick time frame, score one for the Parks Dept. 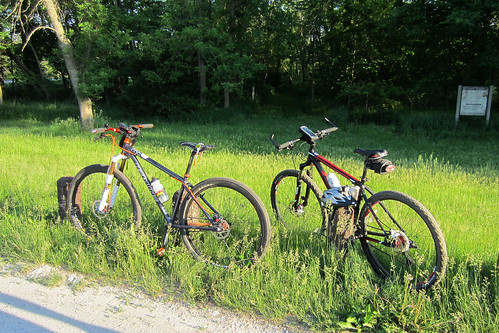 Like I said, pretty small group this week but with Dirty Kanza just around the corner and so many other biking options on this Thursday it just wasn't our night; I am sure the numbers will build as long as the weeks go on as heat doesn't get too unbearable. 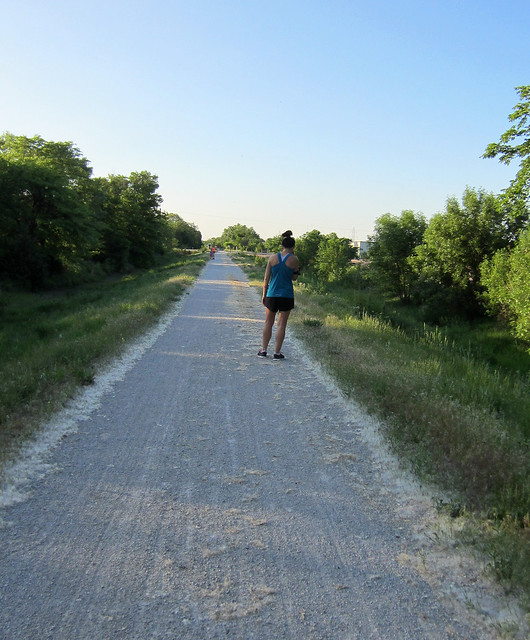 If you didn't make it out last night for the ThNNDDR should come out, it's always a good time and you don't want to realize that you missed out; like this lady who literally broke down in tears on the side of the trail when she discovered that she had missed the ThNNDDR. Don't break down in tears, get your bike and your gear together and come out next week, I promise high fives for all those who want one. 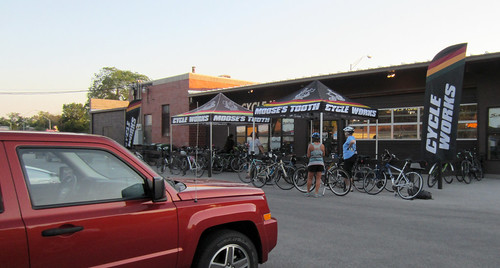 Saw this when I got back to the car to throw the bike on and head home, looks like ladies night was a huge success. Bikes for days!