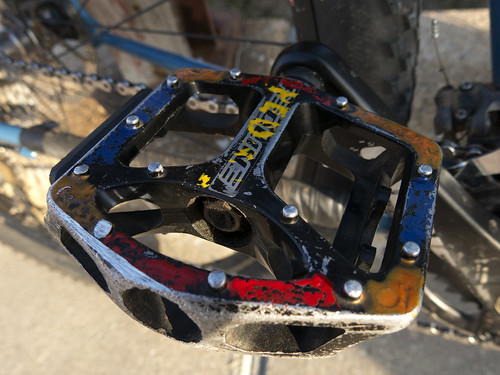 I was pretty excited when I got the news from my source in Lincoln on Wednesday that Wilderness Park was dry, that meant the ThNNDDR would be a go. Since it's been almost a month since we last had one I was pretty stoked that we were going to be able to get it in this week. Since I drive down for Omaha for it I often have to rush home, change quickly, throw the bike on the car, the gear in the car and then beat it down to Lincoln. To help with the situation I generally prepare the day before, lay out all the clothes and equipment I'm going to need, pack the pack and make sure the bike is properly inflated/lubed and for the most part it usually goes pretty smooth... until you forget your shoes... the ones sitting right by the front door... so you won't forget to bring them. Luckily the great folks at Cycle Works had a set of flat pedals that I could borrow for the ride, Rasta pedals even. 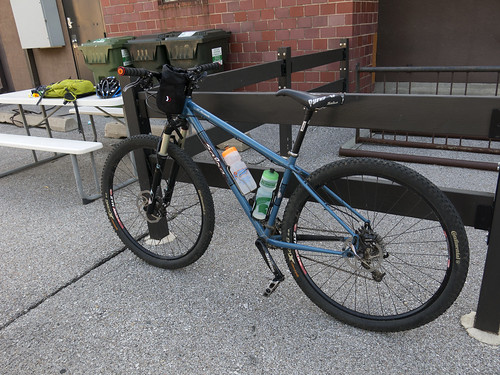 To help compound the awkwardness that are flats, I also brought the oft forgot and neglected geared bike because the ungeared, gearless, gearically challenged (?) bike is in the process of having it's frame swapped. 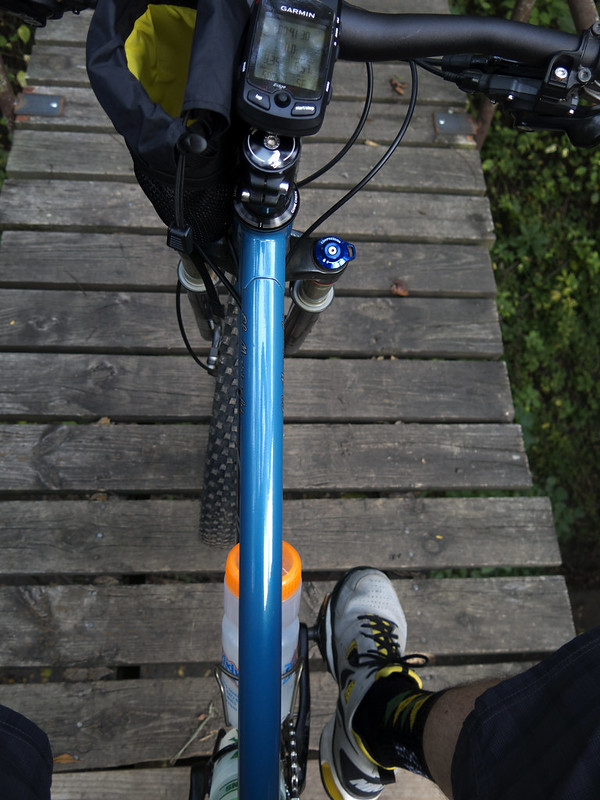 Once I got used to riding flats again most of it wasn't too bad, I still felt like the guy wearing knee high black socks, penny loafers and polyester short shorts, the ones that were all the rave with male gym teachers in the 80s, watching my kid playing tee-ball. 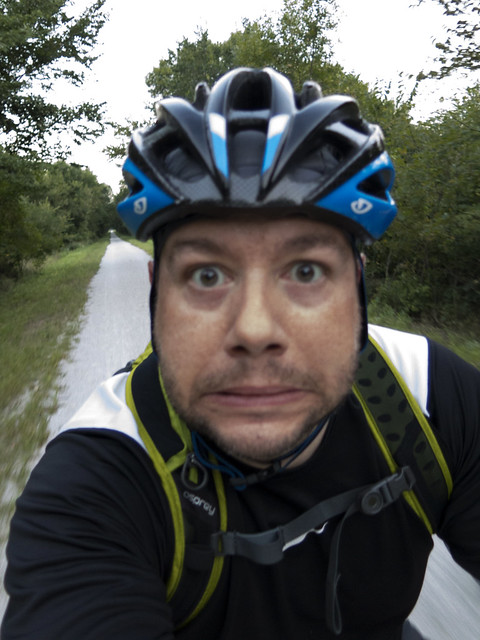 Going over any of the roots, rocks or even the slightest blemish in the dirt caused a lot of sphincter puckering and this face, while the feet never entirely slipped off the pedals, there were more than a few tense moments where I thought for sure I was going to end up with a Redline pedal permanently embedded in my shin bone. It seemed like if you weren't smashing down on the pedal with all the might you could muster your feet just wanted to come up off the pedal, of course the choice of shoes weren't the greatest since they had tread better suited for gripping basketball court than a mountain bike pedal. It did help me confirmed that even with all of the short comings of clipless pedals, cost, specific shoes (when you remember them), falling over while getting used to them... or when forgetting to clip out like a dumbass at a stop light, stop sign, etc.; I am still not going to be giving them up anytime soon. 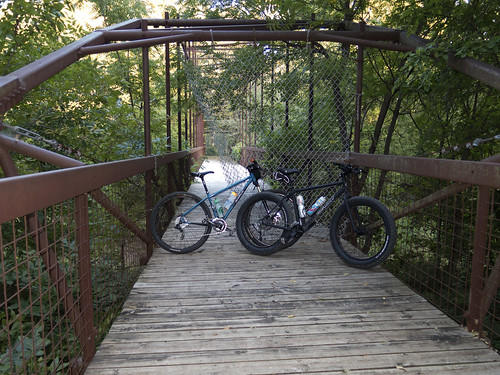 The Park itself was in really good shape and the riding was good despite the pedals, took a detour to check out the progress on this bridge that was due to be replaced this year. As you can see the only progress that has been made is that some rapscallion has managed to free the chain link from it's bindings and once again gain passage to what is surely a deathtrap of a bridge on the verge of collapse if a grasshopper farts in the wrong manner while crossing it. 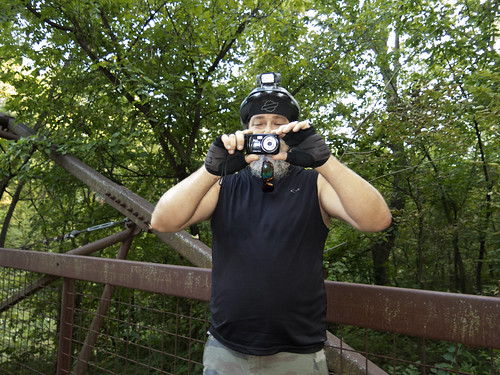 Being the responsible trail users that we are and just decent human beings all around, we felt it was our responsibility to venture out onto the rickety bridge to make sure that none of the scalawags had fallen through or off of the bridge in their attempt to navigate across. All I was able to find was this billy goat looking dude with sunglasses in his beard... so I took a picture of him taking a picture of me as proof that Bigfeets are for reals. I asked for some beef jerky but in typical Squatch fashion, he denied having any on his personage, although I have a sneaky suspicion sunglasses weren't the only things hiding in his chin tuft. 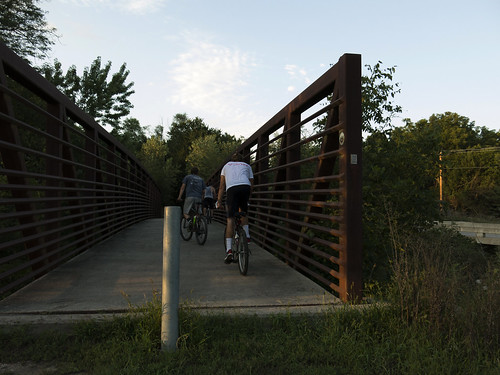 There were quite a few people in the Park last night, we passed several groups of cyclists going the other direction and even ran into this group of what I can only assume were college freshman as they made it all the way to the parking lot on 14th street only to realize that they had no idea where they were and the fact that the guy in the back was riding a girls Next but hey, ride what you brought. Once we pointed them in the right direction they were once again off to explore the Park and hopefully to find their way back home. 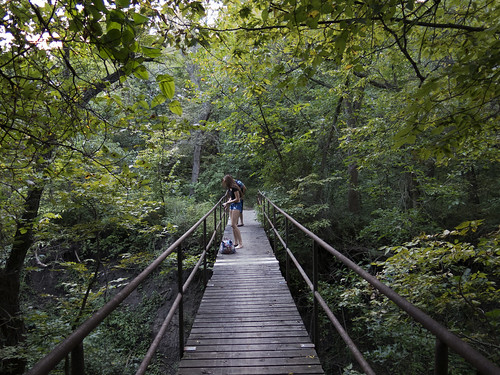 Also ran into this "photography" session, almost literally ran into them, on the way back. It's not unusual to run into people taking pictures out in Wilderness but I sometimes wonder what kind of pictures they are taking and this one especially gave me that feeling, as you can see she wasn't wearing a whole lot and as I came around the corner she was putting articles of clothing back on and mumbling something about a brown chicken and a brown cow?... remember people, mosquito bites itch, even more so if they are in places that don't normally get bit and do even get me started with the West Nile business. 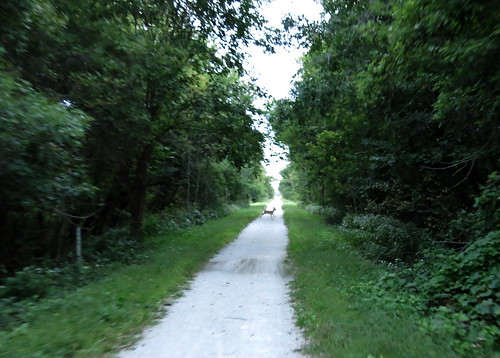 Even had a mamma Bambi sighting with two lil Bambies in tow, seems like specie didn't matter last night, everybody was out enjoying the Park. Hope you got out too.