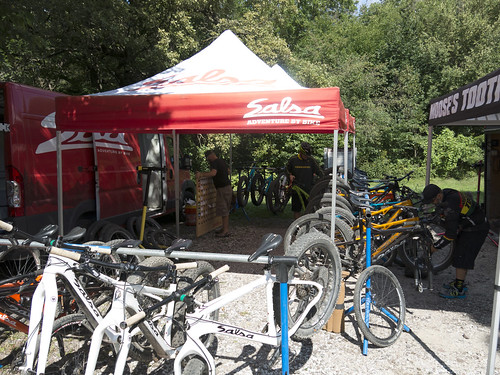 Cycle Works had their Salsa Demo today out at Wilderness Park, originally when this came up on Facebook I was going to be in Lincoln anyway for a dental appointment so instead of just taking a few hours off of work I opted to take the day off and join in on the fun. I would not be disappointed. 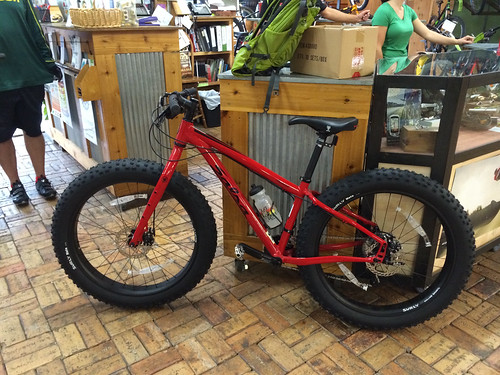 Coming down from Omaha and planning on riding demo bikes I decided not to bring a bike with me but since I was going to be in town with a few hours between dentist appointment and demo ride I stopped by Cycle Works to see about renting their Mukluk for the day... as it turns out this one was on the house. I've said it before and I'll say it again, great local bike shop with great people and service you just can't get from the interwebs. 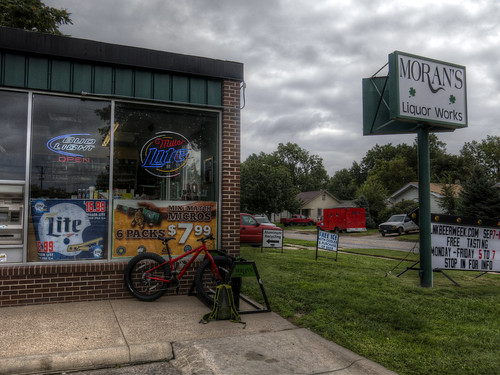 Since I now had some wheels and a few hours to kill Brent and I decided to do a little riding around town and then have lunch at Sips and Subs, another Lincoln favorite of mine, we were in the neighborhood so I decided to make a short pit stop at Moran's on the way to eat and say hi to the guys and see what was new/good, happened upon some Mad Hatter and another four pack of the Empyrean Mango Carpe Brew'em... such an amazing beer. 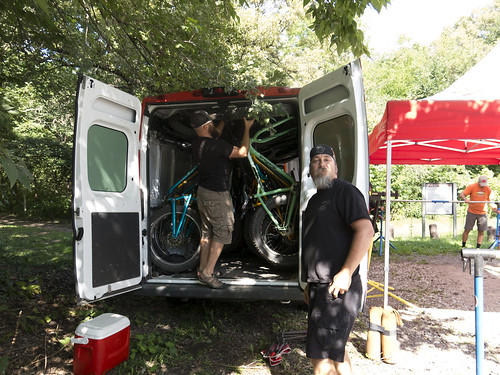 After lunch it was time to head on down to Wilderness Park and ride some Salsa bikes where Brent and I met up with Gary, since we got there a tad early we decided to lend a hand and help unload the van. To be honest it seemed like a good way to get to the riding much faster than standing around watching so there might have been ulterior motives. 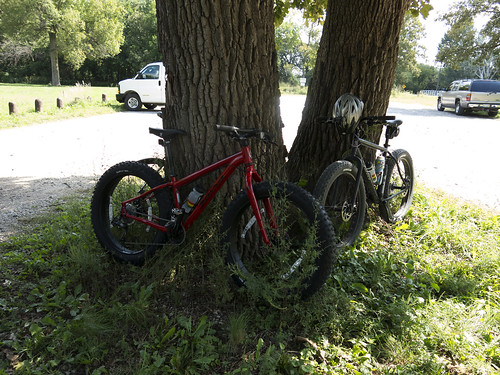 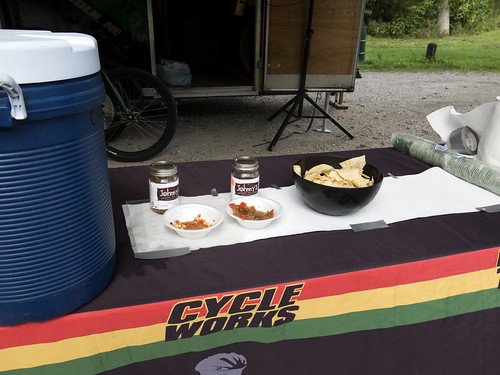 What else would you provide to eat at a Salsa demo if not salsa... and this was really good salsa from local Johnny's Salsa, guy makes some of the best salsa I've personally ever tasted.

Unloading and setup went quick, which meant it was time to get down to the riding. 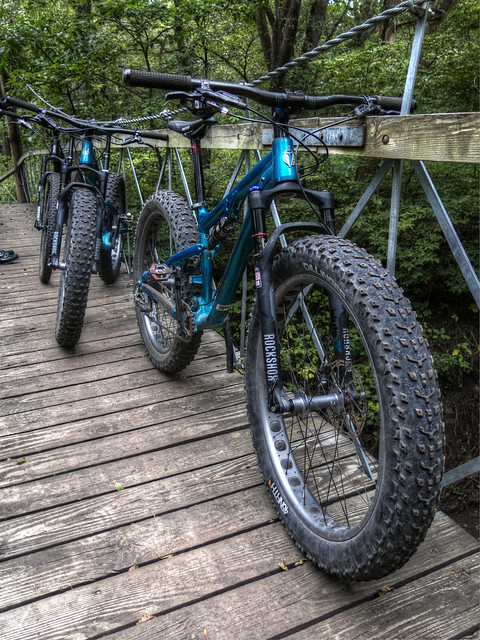 Since we were there right at noon and we figured this was going to be a hot ticket once it got busy we decided to take the Bucksaw out first, this is one bad ass, full suspension, root, rock, trail eating machine. If I had Fat Bike fever before this only increased that affliction, if you're in the market for a Fat Bike I would recommend giving one of these a try before you pull the trigger. It just plain crushed the trail features making it as smooth as the cities vast cement trail network. 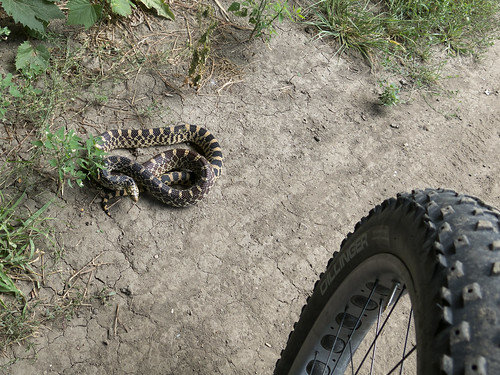 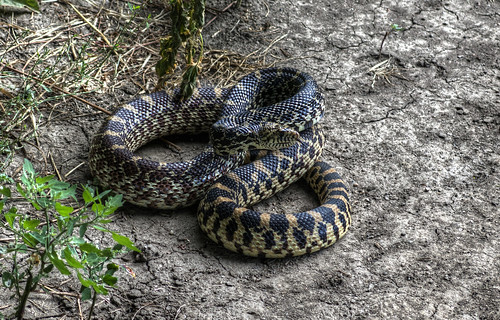 I'd like to say everyone we met was having a blast and enjoying the Salsa demo ride but this guy was none too happy that we were rolling fatties down his trail on an otherwise peaceful Monday morning. I literally almost ran into him coming around the corner and thought for a second that he was a rattlesnake with the rattling/hissing noise he was making. Fortunately it was just a bull snake but he was no less intimidating, we tried to convince him to move off the trail but he was holding his ground and challenging us to "do something"... not wanting to get our butts kicked by a snake we decided to just let him be and hope he moved off before he got ran over. We didn't see him on subsequent passes so he must have decided that fighting for ownership of the trial on this Monday just wasn't worth the effort. 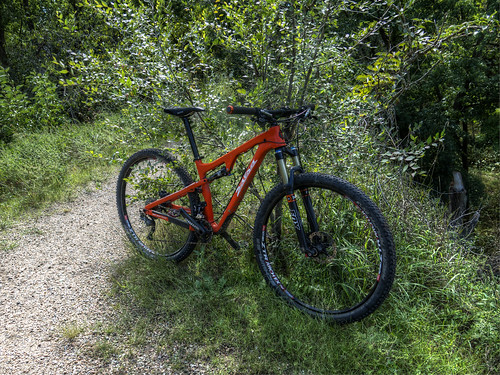 My next pick was the carbon Spearfish, after riding Fat Bikes most of the morning this thing just seemed to fly. It was light, nimble and a provided smiles in bunches, this one might make my short list of bikes to consider when the time comes to replace one of the existing bikes in the stables. 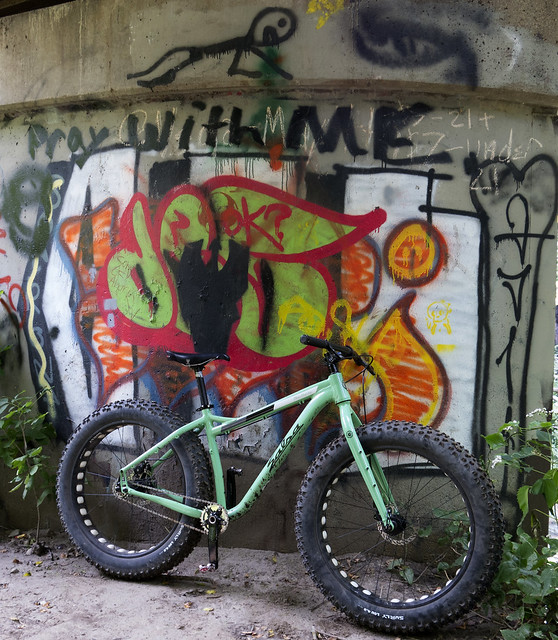 I didn't ride the Blackborow but Gary decided to take it out and loved it, really light, single speed and HUGE tires. 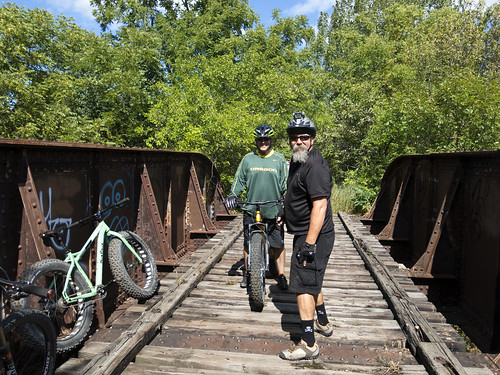 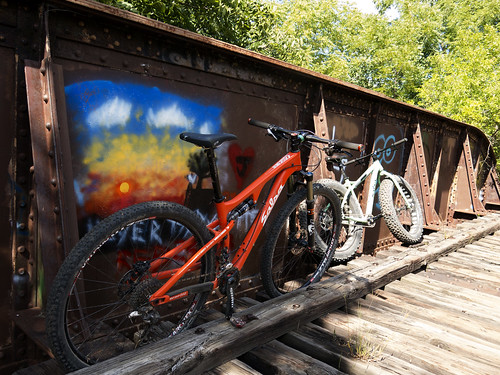 The good part about being early on a Monday demo was that most people were working and that meant we had plenty of time to ride and enjoy these awesome machines and ride we did, all told I had just over 36 miles and 3.5 hours of rolling time (over 6 hours time spent all told) on this demo. I feel sorry for all those who had to work today, this was by far a much better way to spend a Monday than sitting behind a desk, starring at a computer screen. Suckers!