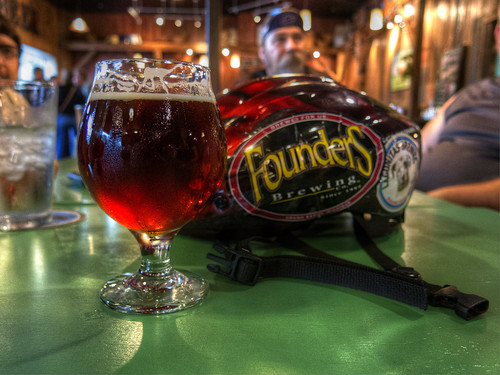 It's said that all good things must come to an end, why anyone would allow good things to end is beyond me, however as the saying goes so did the Tour de Brew LNK rides for the year and I have to say I'm a bit sad to see them end for the year. Last nights charity was the Lincoln Child Advocacy Center and the beer on tap was from the always tasty Founders Brewing Co.

As always the first stop was Moran's Liquor Works for registration and free samples, then on to Cycle Works for $2 bottles... although they had cans as well for the same $2, that wasn't in the brochure but I suppose we will let them have that one. It was mostly the same crew as always with the exception of Ed, his wife hasn't let him come out since the Deshutes ride last October and it was good to have him along. 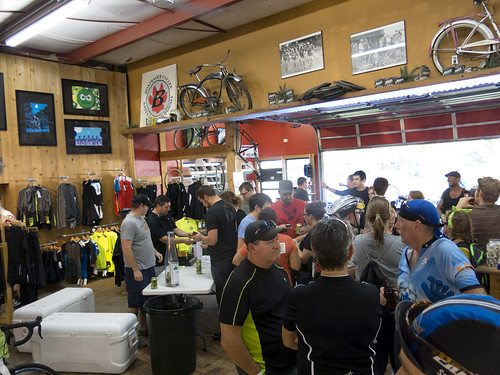 Pretty good turn out for the last ride, I think I heard upwards of 155 riders. 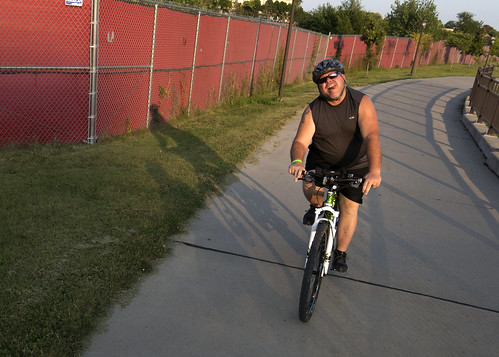 It wasn't long before we figured out why he doesn't get let out much, it's for his own safety!

Luckily we made it all the way down to Longwell's in the Railyard to pick up our next raffle ticket without incident. 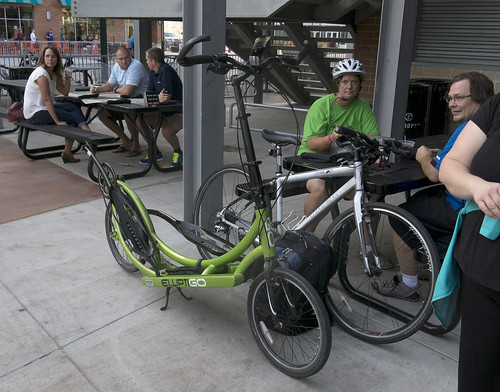 It was there that our good luck ended, although not posted anywhere we were somewhat rudely informed by the sidewalk safety patrol that "Bicycles are not allowed" inside the common area of the Railyard... although nobody seemed to tell these fine upstanding bicycle riders either (well one bicycle rider and one... whatever the heck that other thing is rider) but they were also asked to leave after Officer McDouche came along. As it turns out I worked with the guy years before at the Nebraska State Penitentiary, he was a douche then and if at all possible he might just be a bigger douche canoe now. However since he was wearing the official golden rod colored polo shirt with SECURITY emblazoned on the back we had to respect tha authoritah and kindly moved on. 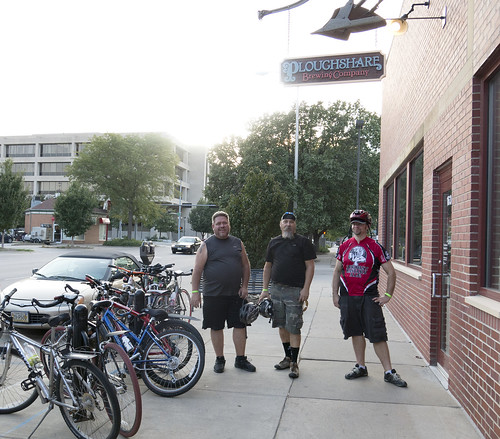 We decided to just ride to Ploughshare and take up one of their tables before the crowd arrived, I'm actually a big fan of the change of not having a second official stop for food it seems to do a better job of evening out the crowds and making the service and service providers faster and less stressed. 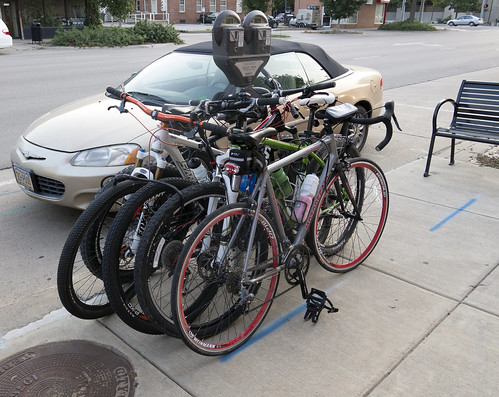 Parking was a bit of a premium so we had to squish in where we could find room, fortunately the meters don't run that late at night or someone might have had a fun time trying to plug it. 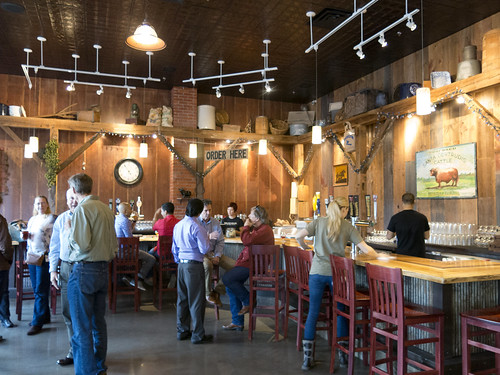 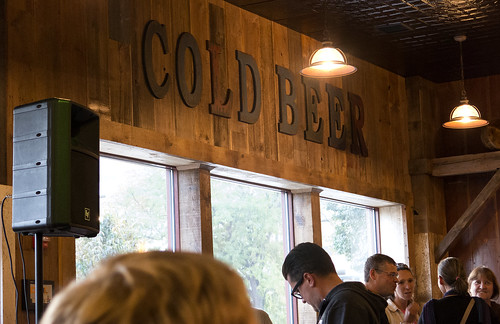 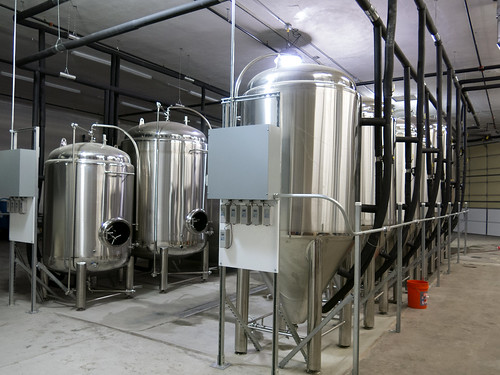 Having never been to Ploughshare before I had to look around and take in the sites, they don't currently brew their own beer yet but as you can see they are getting closer to being able to do that and I'm looking forward to seeing what they have to offer as I've heard it's pretty good. The over all feel of the place was pretty different than most of the bars in Lincoln as well, more of a rustic/country type feel to it, that and the fact that it is a bit off of the main strip might mean that it won't draw your usual college frat boys looking to get laid or drunk when they get turned down on the former. 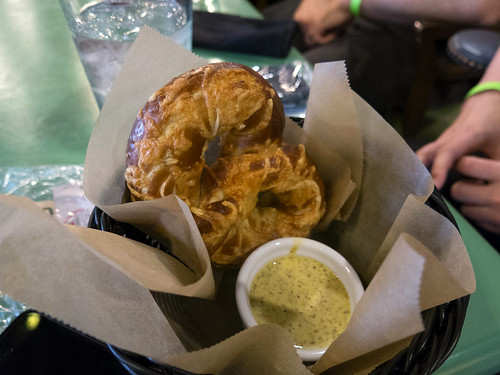 The food here was pretty amazing as well and was not really your typical bar food, I didn't get it but they even have lasagna on the menu and it came highly recommended from a few people who had been here before. This is their pretzel from the starter portion of the menu with ground mustard, the only hit on this for me was that there was not nearly enough mustard but I'm kind of a sauce whore so your results may very. 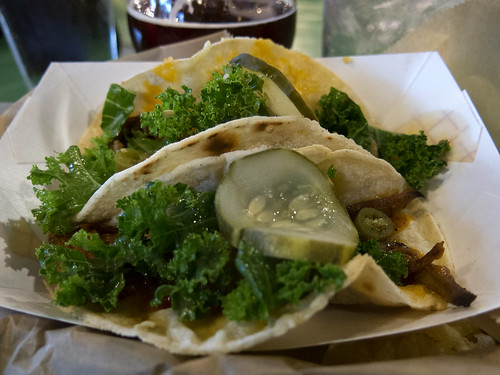 One of their specials that night and the one that made me skip the lasagna, was the brisket tacos. They were phenomenally tasty. 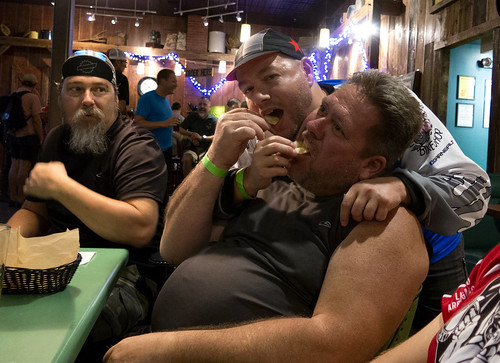 Sharing a few chips with Ed, Gary looks a little jealous but they do tend to act like a married couple, even sharing their bifocals from time to time. 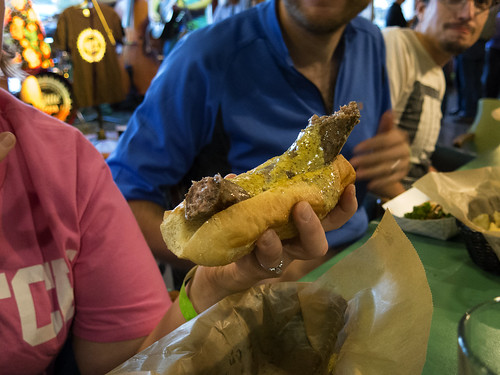 Equally tasty looking and smelling was the bratwurst one of our group ordered, I definitely will have to give it a try on a subsequent visit. 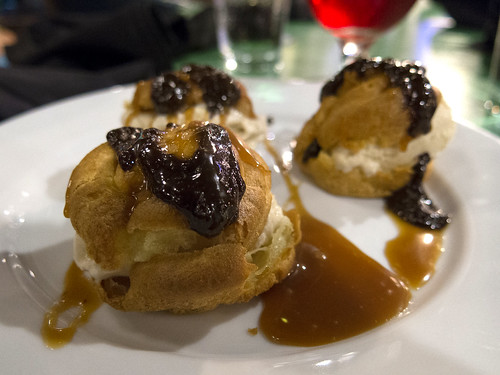 I cannot properly express in a blog how good these Profiteroles were, UH-MAZE-ING! They do have a downloadable PDF of their entire menu on the website if you are interested in drooling on your keyboard for a bit, it can be found here: Ploughshare Brewing Co. 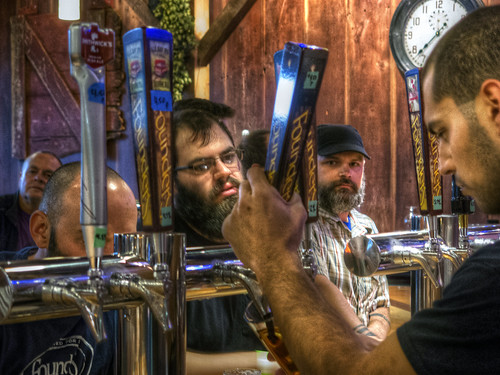 Even though they may not have their own beer on tap just yet, they still had plenty of great offerings from Founders and others, a craft beer connoisseur would not be disappointed. For some, like this gentleman, the beer choices can sometimes cause a hypnotic/euphoric state. 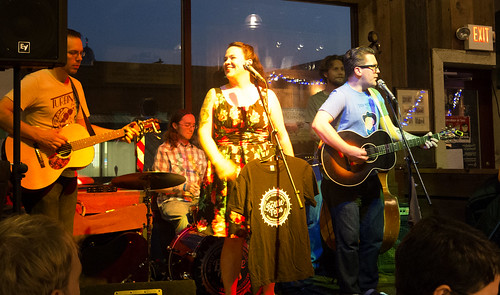 A first, and hopefully not last, for the Tour de Brew ride was live music courtesy of The Bottle Tops. 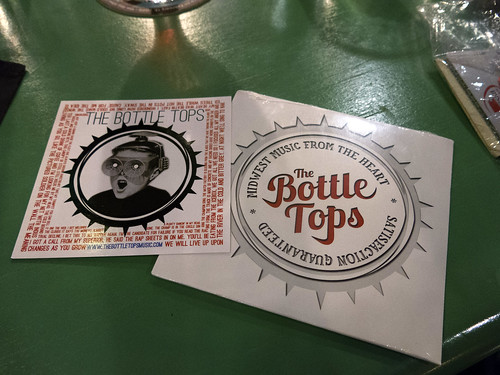 I thought they were really good, matter of fact I liked them so much I picked up their CD. 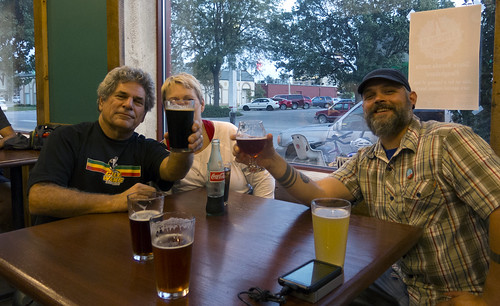 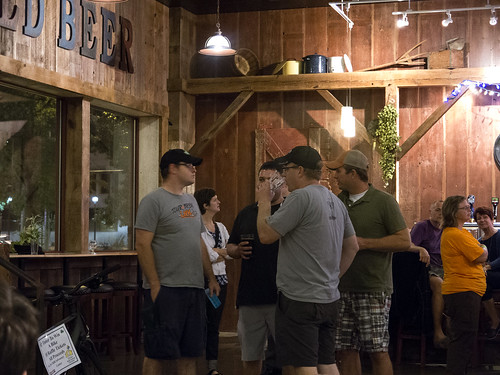 As much fun as these rides are for most of us, there are a few people who do the work in the background to make it all happen. Top picture is Rick and Damon from Cycle Works, great guys and a great bike shop that does a lot to give back to the community. In the bottom picture is Travis and Eric from Moran's Liquor Works, also really good guys, all of them put in a ton of work to make these rides possible and I for one totally appreciate all that they do by making sure to spend my money at their prospective establishments whenever possible. I would recommend you do the same. 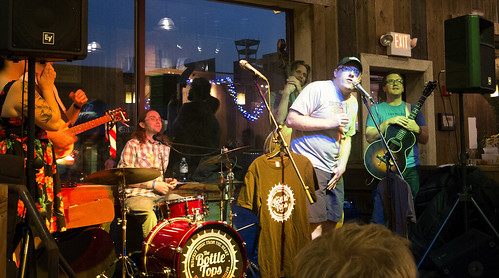 Almost time for prizes... no matter how much we begged and pleaded we couldn't convince Eric to sing us a song, someone apparently wasn't drinking enough. 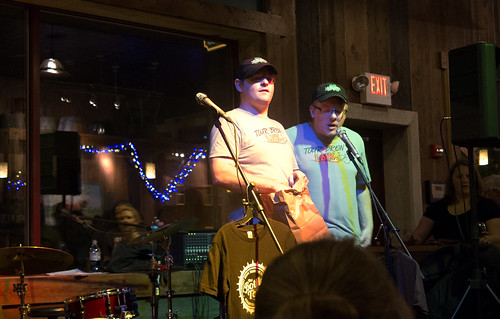 Time for the raffle! 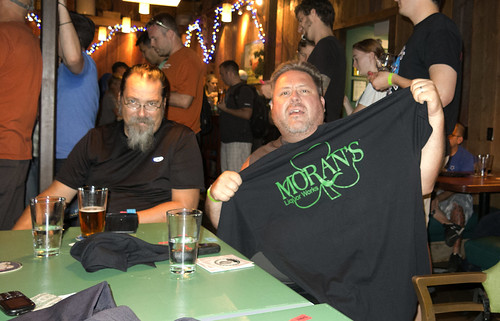 Tonight was t-shirt night at our table, seemed like everyone was scoring one.

Vince checking out his swag. 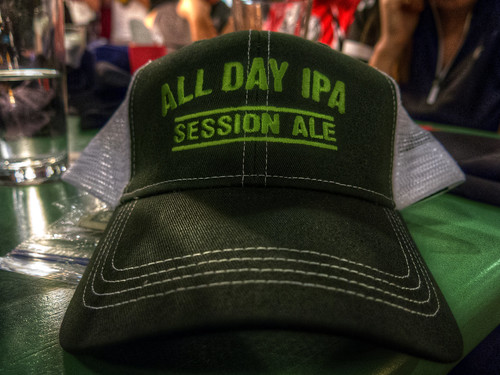 I even managed to score a sweet hat, sort of, the GF kind of claimed it as hers, I guess we are co-owners of a sweet hat... until I wear it a few times and get my funky head sweat in it, I think after that I'll be the sole owner of a sweet if not slightly smelly hat. 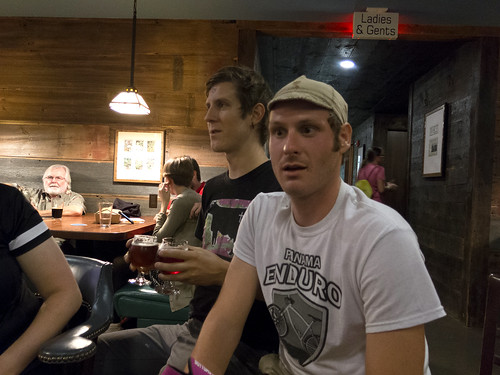 Adam was at first shocked that he didn't win...

...and then overcome by horror at the realization that he was to go home empty handed. 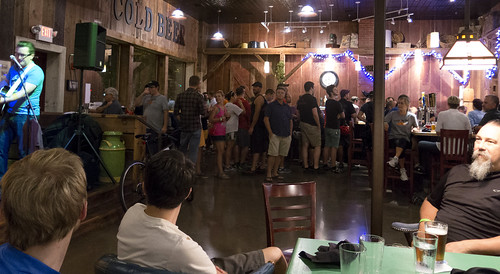 During the raffle, standing room only. 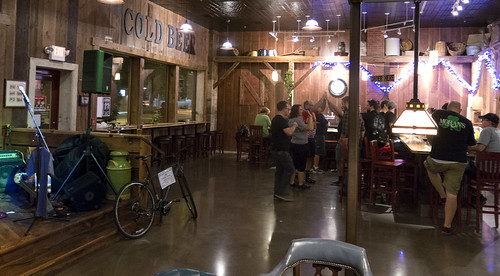 Once the prizes were all given out the bar became a ghost town. 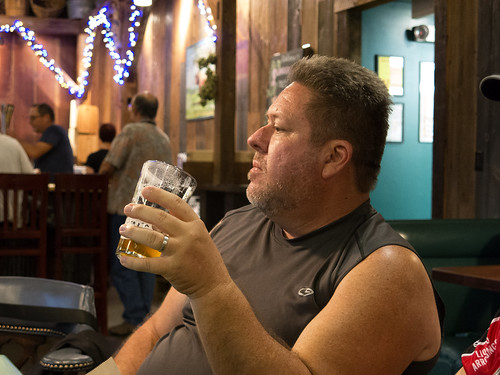 Ed seemed to be thinking what we all were and that is how sad it's going to be in a month when there isn't another Tour de Brew LNK ride to break up the monotony that is winter life in Nebraska. Not only are they a lot of fun but they also give back to local charities and help boost sales of local businesses. No telling how much business revenue we helped stir up at the locations that hosted us but I know everyone of them commented about it not being a normal Thursday, I do know that the rides helped to raise almost $4,000 for local charities and that's something everyone can be proud of. 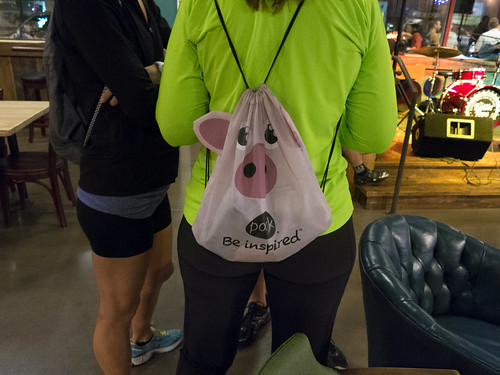 After a few more minutes hanging out and finishing drinks we all new that this ride was all but over and we took this pig backpack as the proverbial fat lady singing... at least it was close enough for us. Cannot wait for next year when I am sure these rides will pick up right where the left off, come on spring. 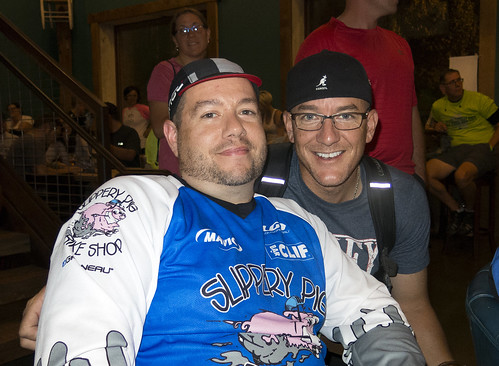 There are some bad aspects to social media it can used obsessively, to do harm to others and there are some who say that social media has made us antisocial but there are also positive aspects to it as well. Without social media these rides might not happen, they  might not be as easy to put together and it certainly wouldn't be as easy get the word out about them.  If it weren't for social media I wouldn't have met more than a few people I now consider friends. This is Clint, yet another person that I met and communicated with via social media sites like Twitter and Untapped but had never actually met, last night was the first time we ever met face to face, it's always good to be able to put a face to an online persona. Sometimes social media can be used for social purposes, I guess it's all about how you use it and what your intentions are going into it. Social media doesn't make someone a troll, a bully or narcissistic but it can and often does magnify those personality flaws by providing a means to broadcast that type of behavior to a greater audience and often times under the veil of anonymity.


Hopefully the video loads for you, I've had some sporadic success with it... if it doesn't load you can see it and more here.