Last night was the second installment of the Tour de Brew LNK ride (or as I like to call it the Beers, Bikes and Buddies ride), I wasn't able to make it to the first one because of other commitments so there was no way I was going to miss this one. 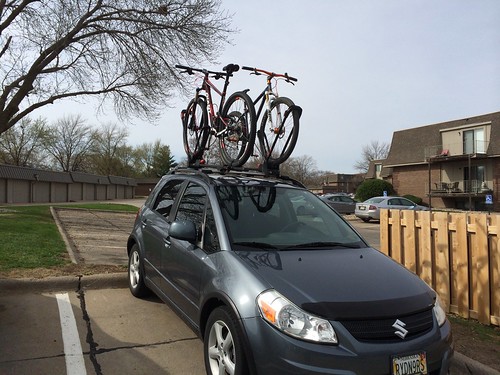 Luckily I have a really cool boss man who let me bug out a little bit early so that I could load the bikes on the car and beat feet to Lincoln. 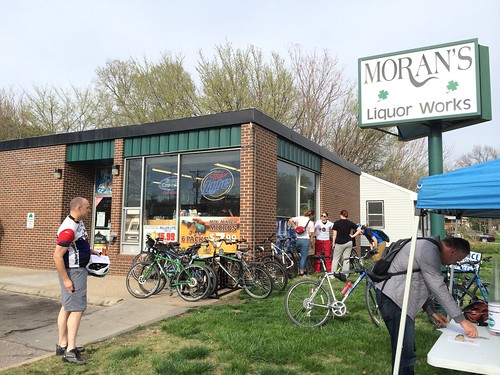 Made really good time and got to Moran's Liquor Works just a couple minutes after registration for the ride started and it was already hopping. Man I wish I could find a place like this in Omaha, the search continues. 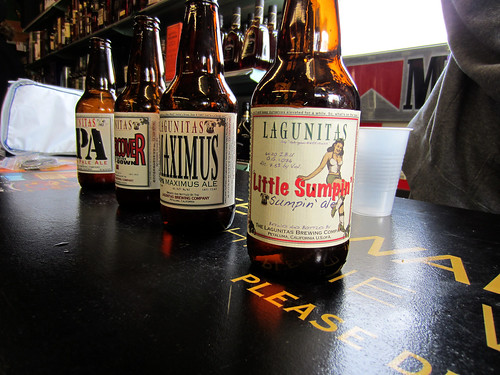 On tap at Moran's were some tasty treats from Lagunitas Brewing Company out of California, they make some really good beer and these were no exception. 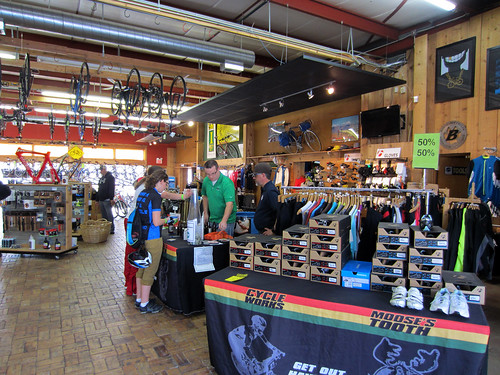 After sampling the brews at Moran's it was time to head over to Cycle Works to drink more beer and drool on bikes and accessories before heading downtown for more beer and some food. The concept of the ride was that we were supposed to ride over to Cycle Works but since we drove down from Omaha we decided to drive over and park the car at Cycle Works instead, Moran's was still open for another few hours and we didn't want to take up any of their valuable parking. 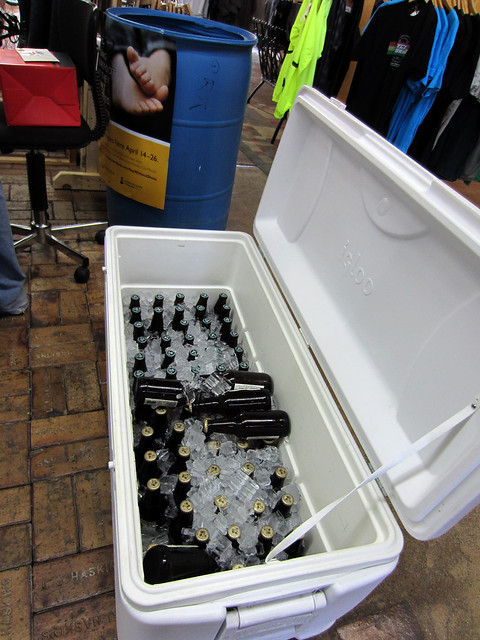 Cycle Works is already a good place to ride to and hang out but add beer and it's almost like heaven, there better be the smell of chain lube and beer in heaven... 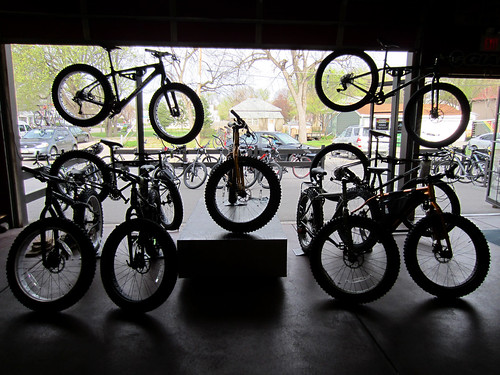 There were all kinds of people that turned out for the Tour de Brew ride, like fatties hiding in the shadows but you know who doesn't love those fatties. 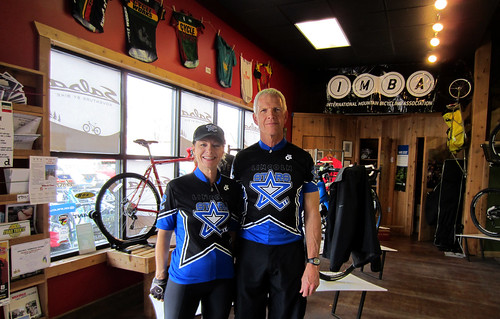 There were these guys in their awesome Stars hockey cycling jerseys, man I should have ordered one when they were taking orders but me and tight spandex don't exactly go together. 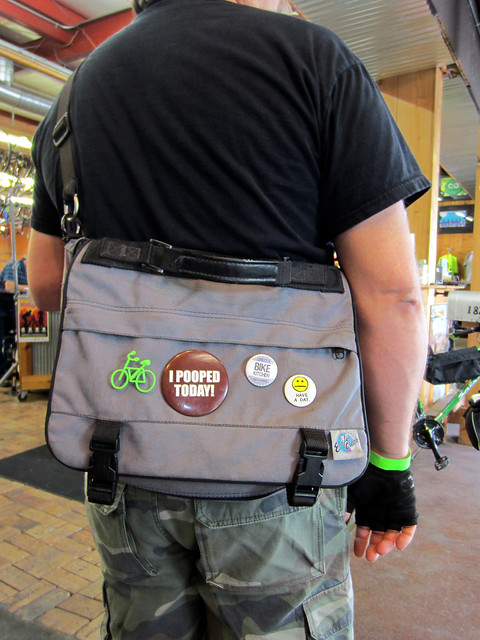 Then there was Gary, he pooped today... says so right on his button and buttons don't lie.

After downing some beers and schmoozing it was time to take the bikes off of the car and ride. 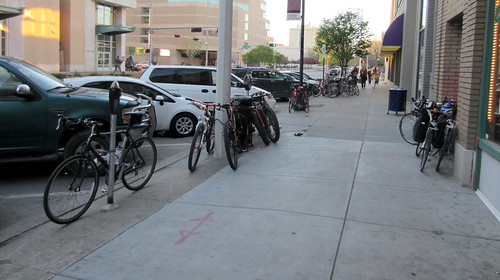 There was quite a crowd already at Dempsey's Burger Pub by the time we got there, all those bikes lining the block is a beautiful thing to see. Way more than one less car. 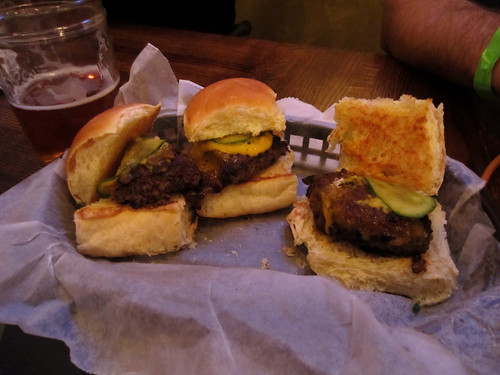 Wouldn't be a trip to Dempsey's if you didn't get some of their awesome burgers, if you haven't tried them you really should. 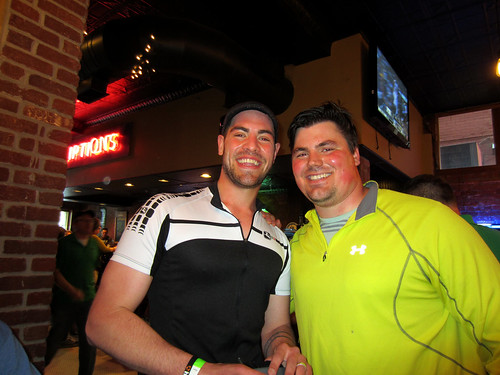 Mukluk and Krampus showed up at Dempsey's, always good seeing these guys. 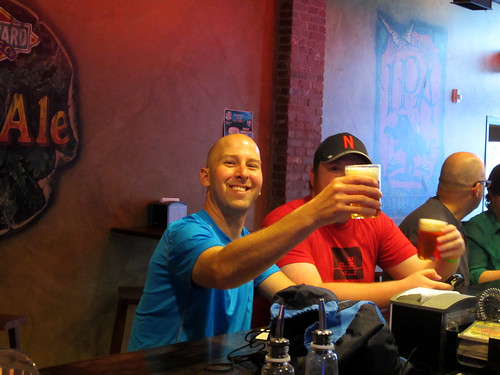 Met Jonathan for the first time in person, it's weird that with all the social media today you can talk to people for months, even years and never actual meet them face to face. Always good to actually meet someone who you've interacted with digitally. Looking forward to riding with him in the future, hopefully he can make a few of the group rides coming up. 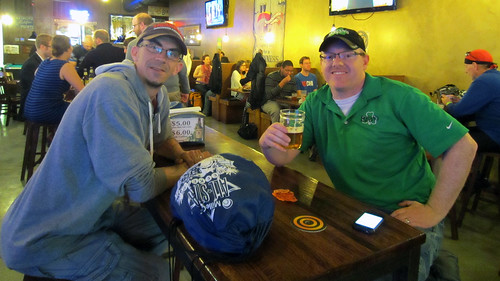 The Moran's guys came down to partake in some great beer as well, not used to seeing them not behind the counter... didn't realize they even had a lower body. 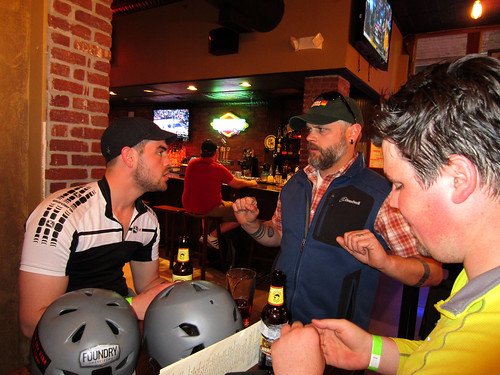 A hottie and some dude who looks like he needs to poop, guess he didn't get his button yet today. 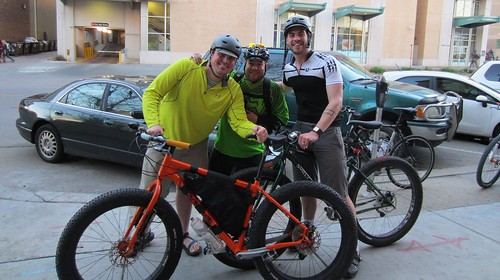 Mukluk and Krampus with their name sake and that constipated dude getting ready to head to the last stop on the tour. Man it was a perfect night for a ride, weather couldn't have been any better. 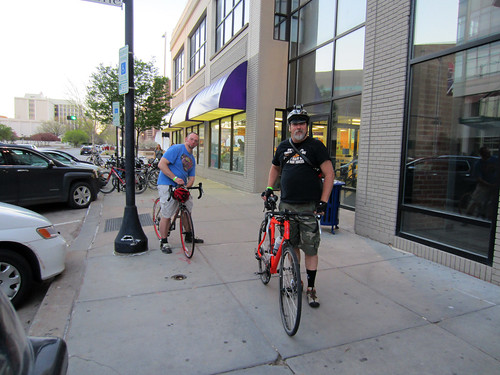 Gary looking like a cross between ZZ Top with that beard and Chewbacca with the crossed straps. 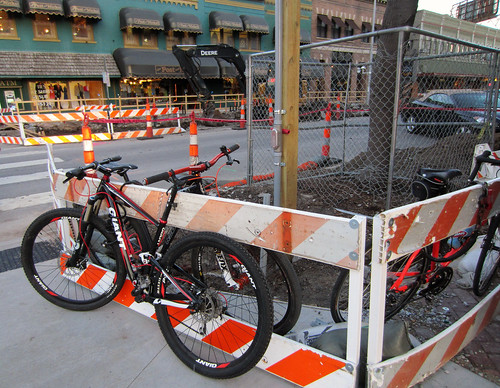 There was a bit of construction going on around Jake's which probably sucked for anyone in a car but when traveling by bike the barriers made for more than ample places to lock the bikes. 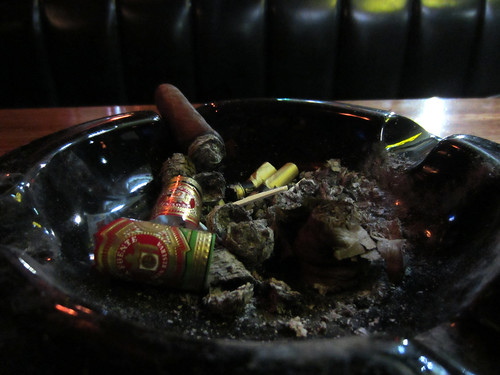 This was the first time I'd ever sat inside Jake's and had a beer, I've been in there before to pick up some cigars with people but never stopped and drank there. Never been a big fan of smoke but it actually wasn't too bad, definitely not nearly as bad as cigarette smoke is, could have been the beer helping out but it didn't really bother me. 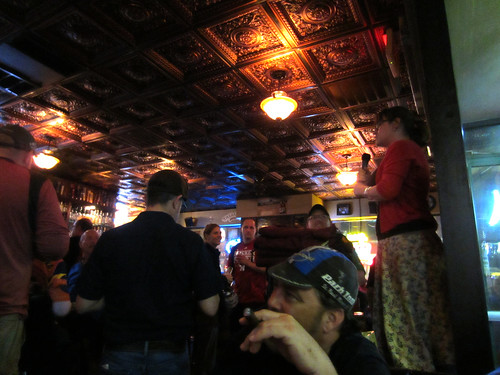 Prize time, my usual streak of luck kept going and I didn't win anything but when you get to ride bikes and drink beers with your buddies I don't know that you can say you lost either. One of the cool things about the rides in addition to the beer and the riding is that each one helps out a certain charity or non-profit organization by raising money, it's really a great concept all the way around. 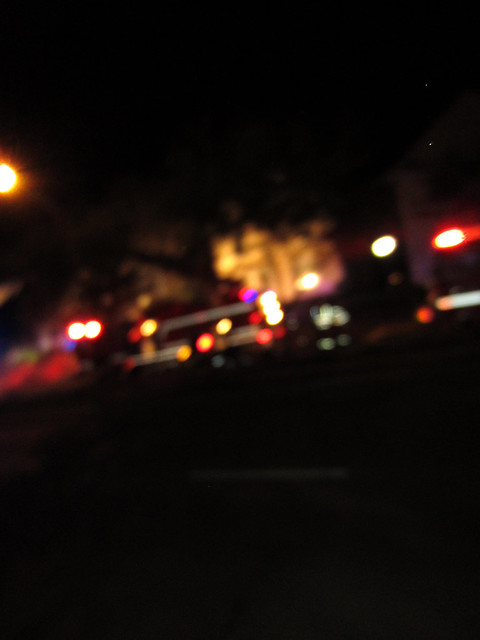 Once the festivities were over there was nothing left to do but ride back to Cycle Works, throw the bikes on the car and start the trek back to Omaha. Along the way we happened upon 4-5 fire trucks and a slew of people standing along Vine Street near 27th, someone was having a horrible night as their house caught fire, luckily it didn't look like there were any injuries. I know the picture is a little blurry but I still liked it and as editor in chief of the blog I make all the final decisions and I voted to keep it. 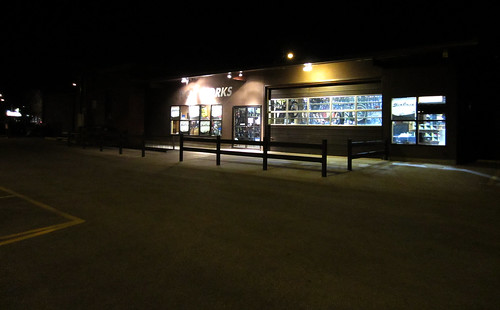 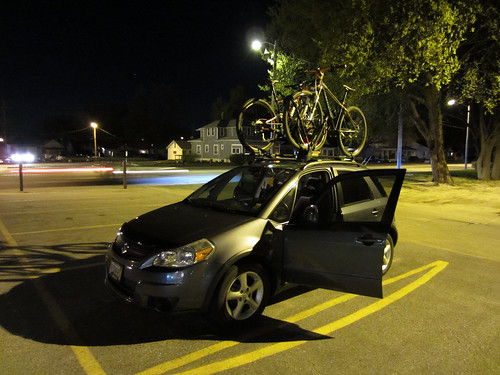 The parking lot was a sad, lonely, deserted place... such a stark contrast from just a few hours ago and the rest of the night. We will definitely be back, riding bikes and drinking beers with great people is always a good time, I'm glad that those putting in all the hard work behind the scenes to put them together do so, without them there wouldn't be any of these rides. 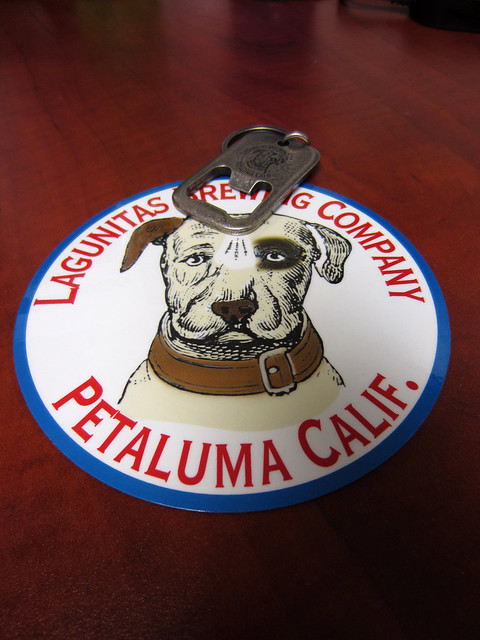 While I technically didn't win anything I didn't exactly go home empty handed either, between the free bottle opener, the magnet and the four cool Lagunitas glasses I scored (they were also giving those away as part of the tapping of the new Waldo's Special Ale promotion) I'd say I did alright. Between these Tour de Brew LNK rides and the group rides that should be starting here soon, it definitely is shaping up to be a good summer full of great rides.