All In All It's Just Another Ride Up The Wall 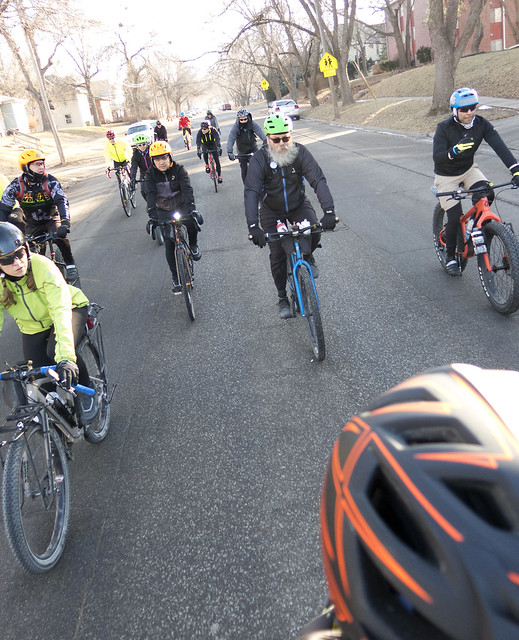 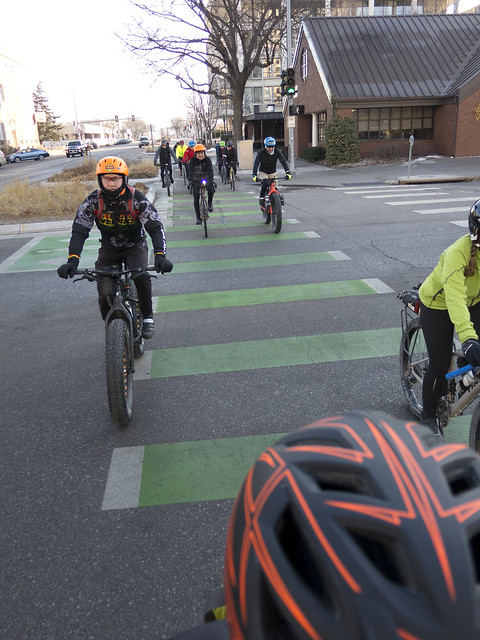 Winter decided to give us a slight reprieve the latter part of the week with several days of above freezing temps, which set us up for a ideally day for a longer Saturday Morning No Drop Fat Bike Ride. With the nicer weather we had pretty good turn out, 14 of us if my count was correct. It is funny how different temperatures and/or the existence of or lack of snow will bring out two different groups of riders. 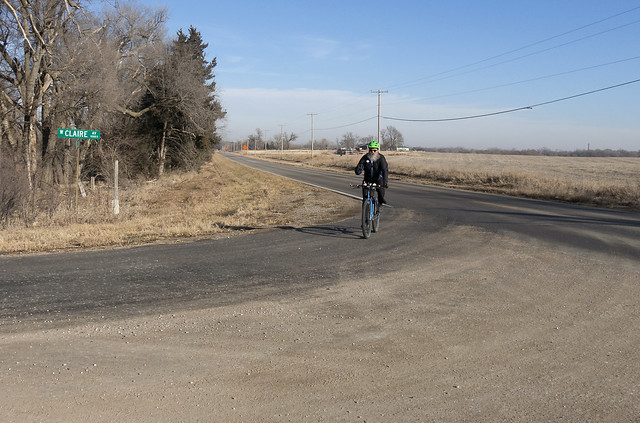 As I said, 14 of us left the shop but it seemed that Saturday was a busy day for folks and several people had varying schedules to adhere to that would preclude them from riding the entire route but they rather than skipping altogether they decided to ride what they could before turning back for home and for that we were appreciative. Knowing that people had to leave early I was prepared to see folks turn off but didn't really expect the first one to be before we even got out of town; Gary had a mechanical issue with his front chain ring and decided to turn back at W. Claire rather than potentially have a more serious problem out on the gravel where it he might have to wait quite awhile for a rescue ride or a very long walk home. 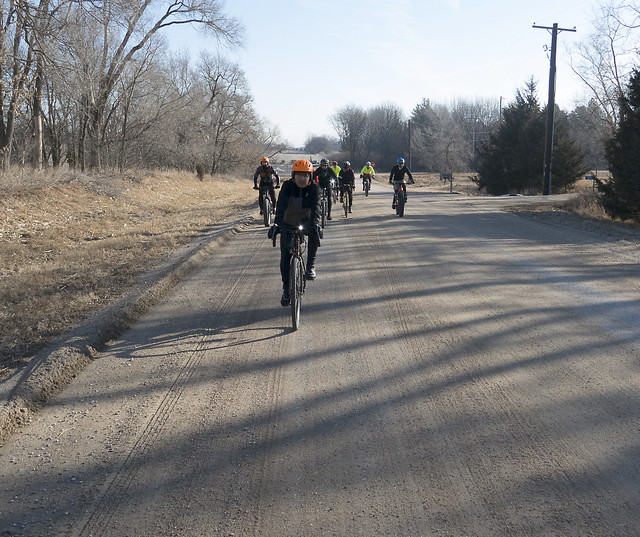 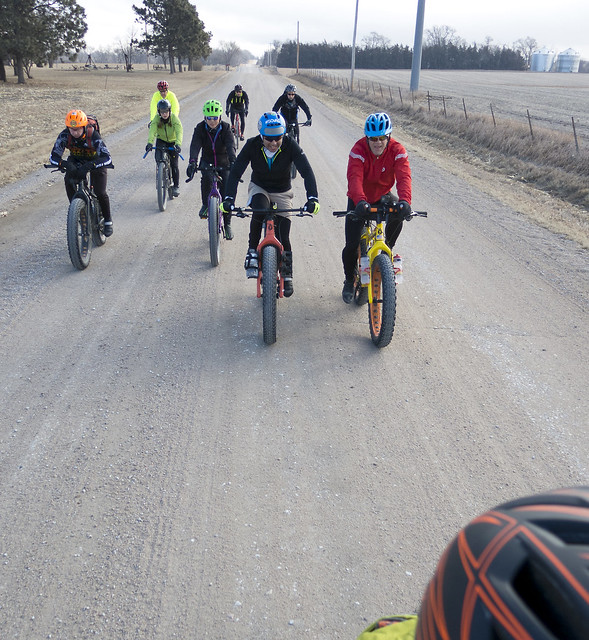 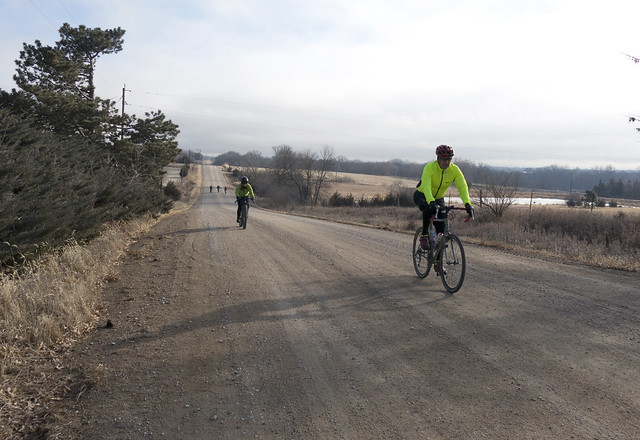 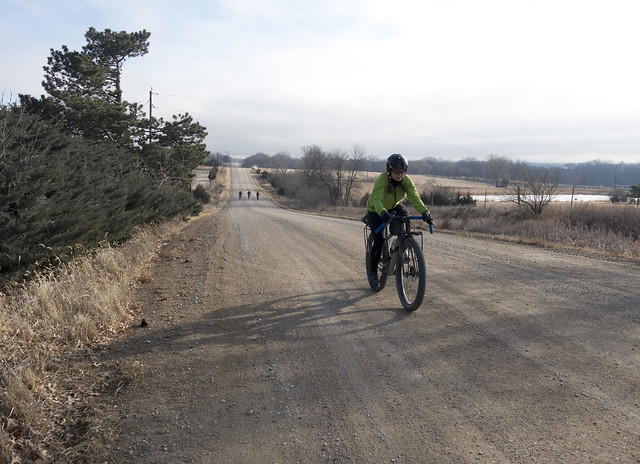 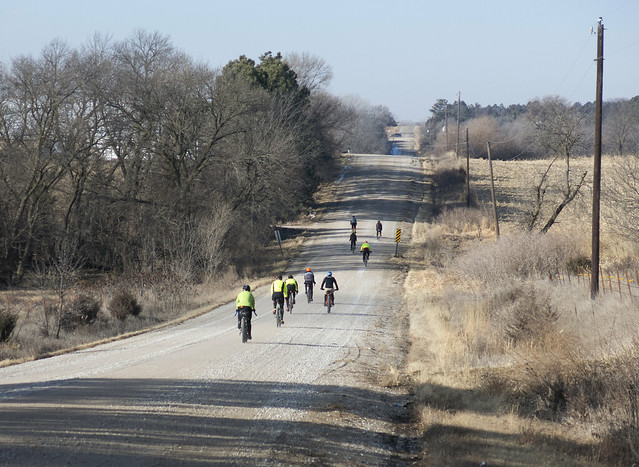 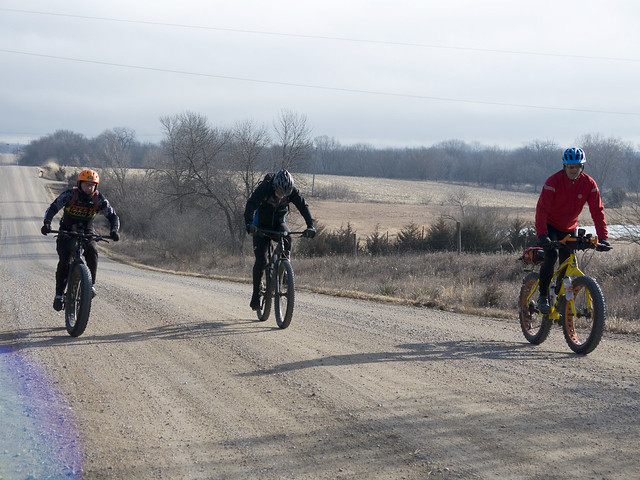 Despite the melting snow and slop around town, the gravel was in great shape. Just the slightest bit of snow here and there in the shade and no mud at all to speak of; couldn't have asked for better conditions for a mid January ride. 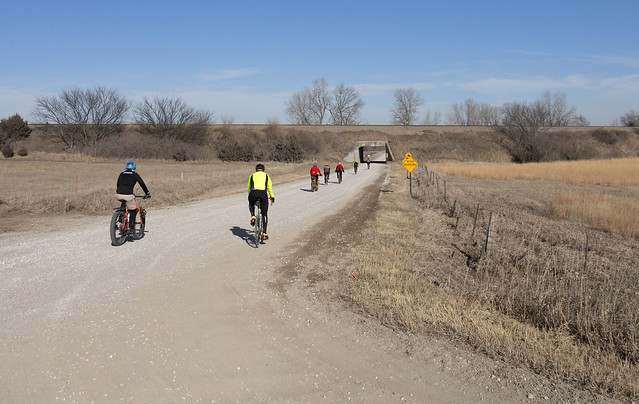 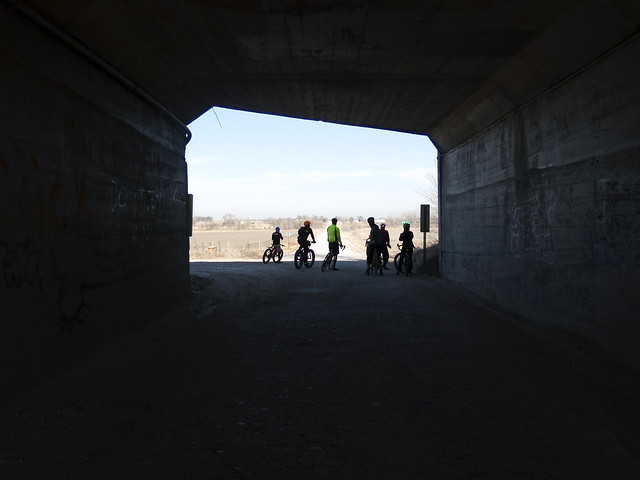 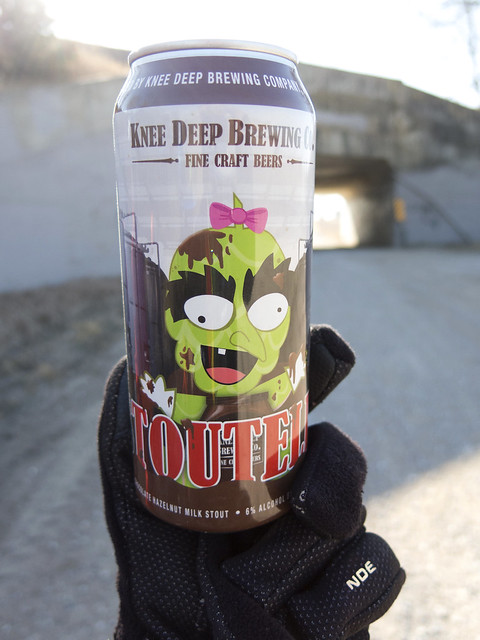 Since the plan was to hit up the Denton Wall, it also meant we could easily include the West A St. tunnel in the mix. A perfect stop for a tunnel beer, not quite as high class as a bridge beer but leaps and bounds above the lowly ditch beer for those of you keeping track at home. 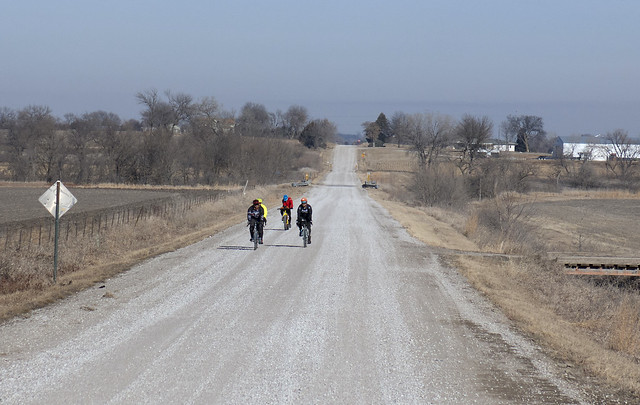 During our hydration respite, three like minded riders happened upon us. Not knowing if they might be familiar faces Dave went out to greet them. Slight recognition was all that I could muster and names escaped me but free high fives were given out zealously as they rode by none the less. 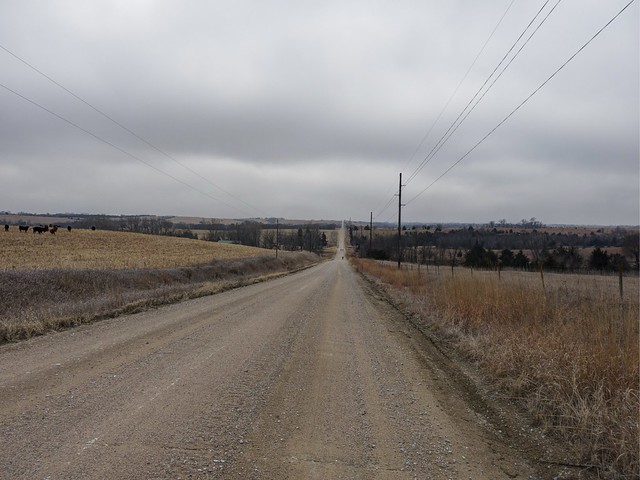 While not as long or as steep as the monster on county road 30 we rode in the Sto Mil last year, the wall is not without it's challenges and no slouch in it's own rights. Almost as soon as you turn onto S.W. 140th from W. A Street, you can see the wall looming in the distance, almost 4 miles away; sitting there waiting, mocking you. For your efforts you also get four leg and lung burning miles of steep gravel rollers, each one seemingly larger than the last one, each one sapping much needed strength and stamina from you as you inch closer to the wall. What it might lack in overall length and a few degrees of steepness it more than makes up for with it's legions of co conspirators all trying to break your will and resolve to go on; it's also not uncommon to run into a pretty stiff headwind to add just a little more misery to the mix. 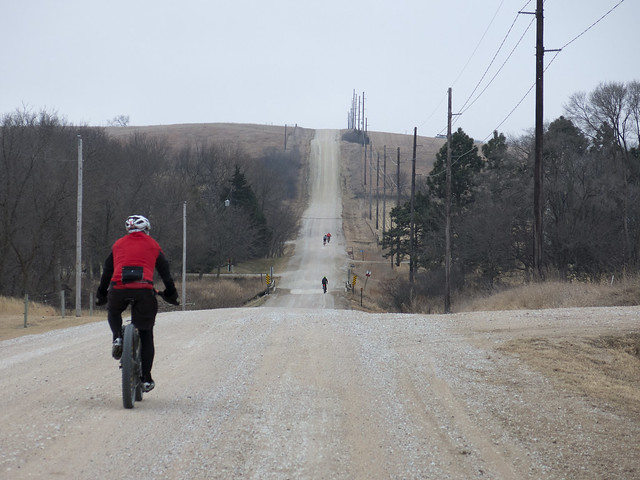 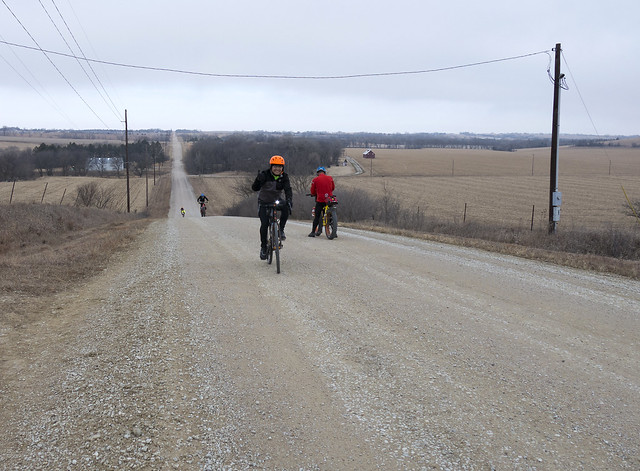 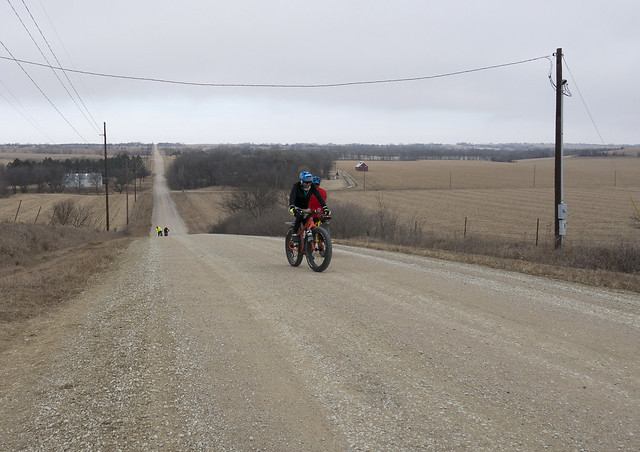 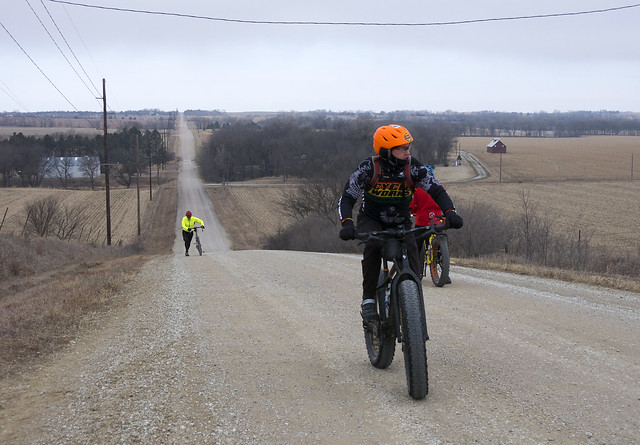 When you first meet the wall you might wonder how, in this flat state, such a large mound of dirt could exist but all the pondering in the world isn't going to help you get up it's 13+% grade so all you have left is to curse, pedal, breath and hope you don't stop pedaling or breathing before you reach the top; the cursing generally only increases the closer to the top you get. Jim didn't make it to the top without the walk of shame, he isn't the first and he won't be the last. He threw a chain part way up and that settled that. Starting at the bottom is bad enough but trying to get going again in the middle is a feat most people try not to undertake. 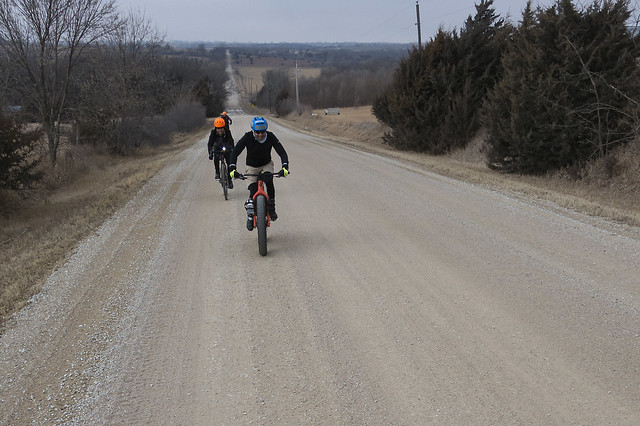 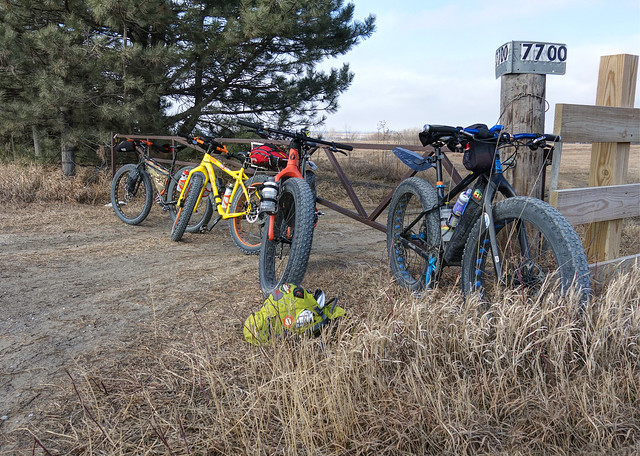 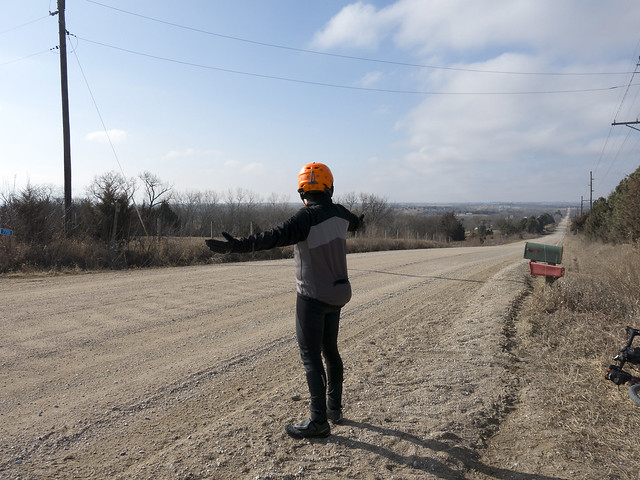 Shortly after the wall most of the group broke off and headed back to Lincoln due to those prior commitments. With 25 miles left to go they doubted my time table, that we would be back in an hour an a half and so off they rode. They missed out though because shortly after we parted ways the sun popped out of the clouds and the day became gloriously warm and sunny. We piled the bikes on the right side of the no trespassing sign and just soaked up the sun for a few minutes, although none of us quite put the effort into it as Raffet did. 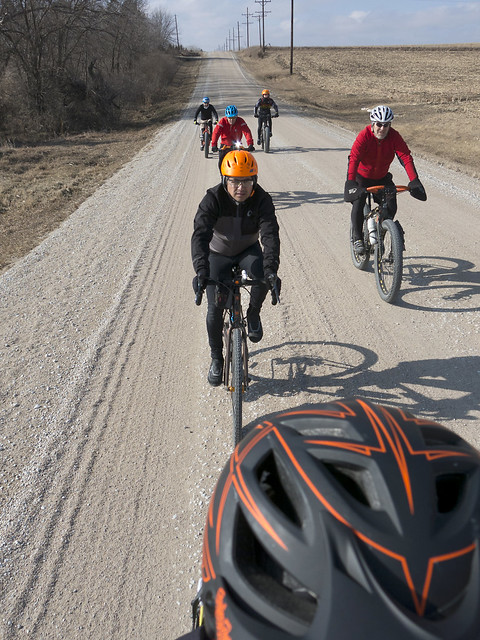 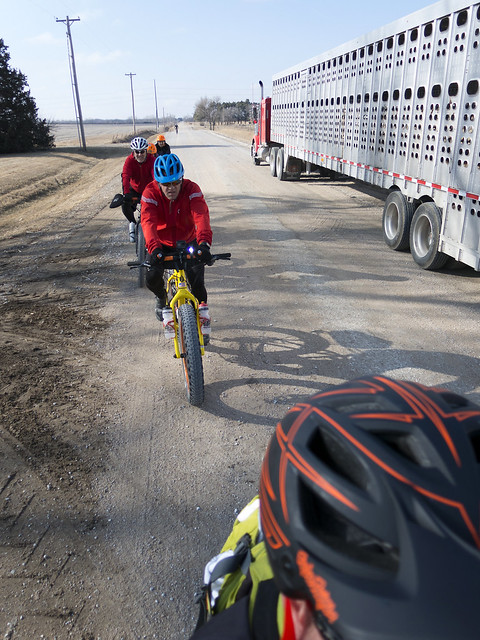 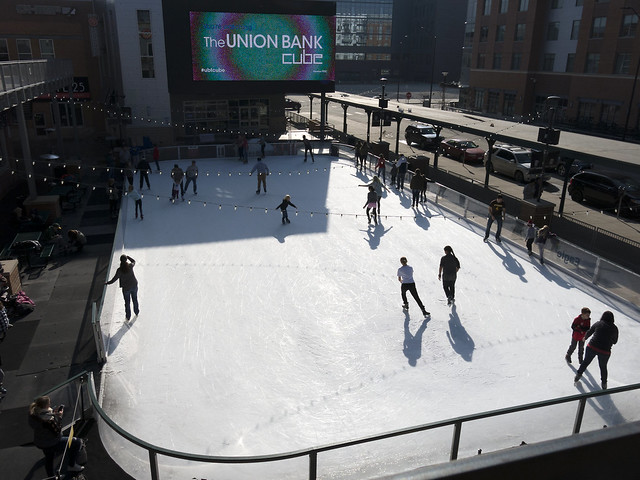 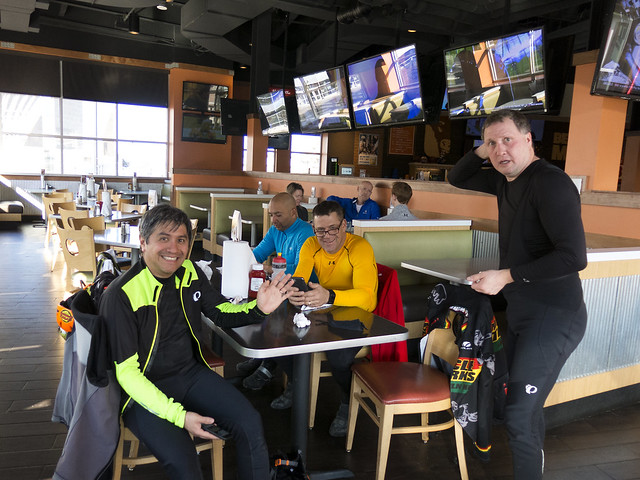 The doubters shouldn't have doubted because even with a 15-20 minute break to sunbath, we were still butts in seats at Buffalo Wings and Rings at 1:40. Ha! 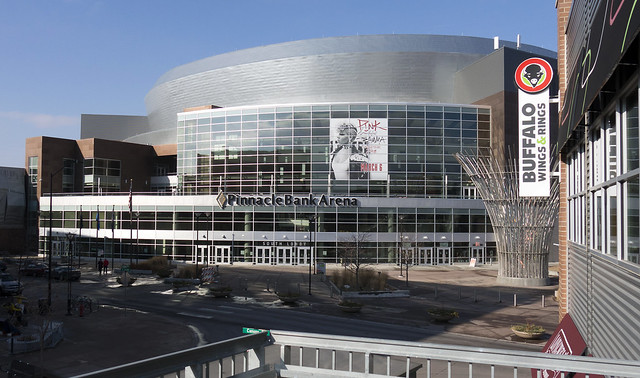 For some reason the patio seating was not opened on this fine January day but if it were to be, the view was pretty darn good. 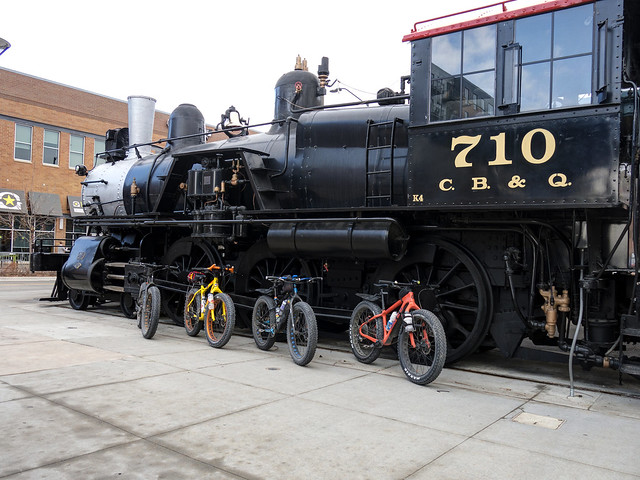 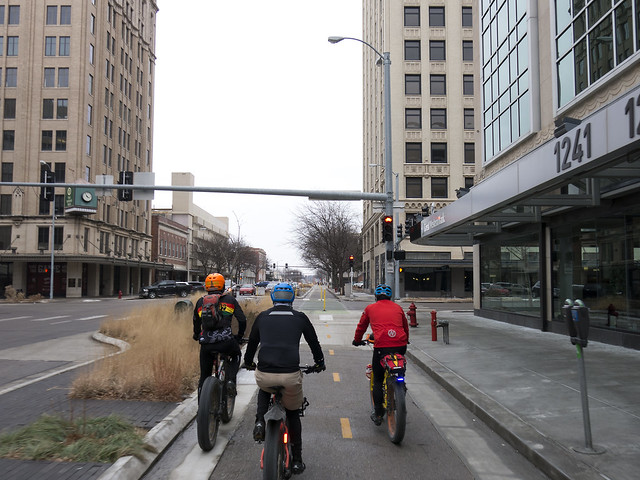 With lunch finished it was just a short ride up N Street back to the shop and the end of another SMNDFBR.
Posted by Rydn9ers at 9:20 PM