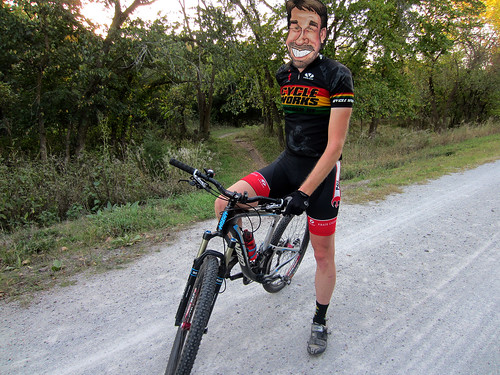 Chuck Norris is officially and forever, from this day forward banned from participating in, talking about or ever using his likeness again for the ThNNDDR! I don't know if his popularity has waned or if people were just intimidated by the thought of Chuck on a mountain bike but I posted this picture earlier in the day concerning the ride... and then nobody showed up! 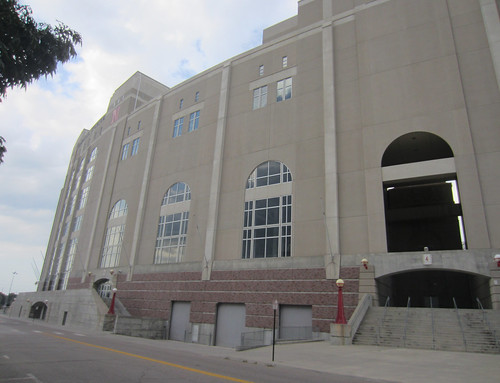 Well, technically I showed up so it's not like NOBODY showed up, just not all that many of us. Not to be deterred however I decided to ride anyway, I did after all have the bike, the fancy padded shorts and the helmet on, would seem like a crime to waste such an ensemble driving in a car.

Passed Memorial Stadium and noticed that they are putting up faux bricks, I guess the kick backs for joining the Big Ten (who actually has 14 football teams) and leaving the Big 12 (who only has 10 teams) aren't enough for real bricks... of course since they can't even accurately count the number of teams in each conference I suppose that probably just carries over to the accounting department. 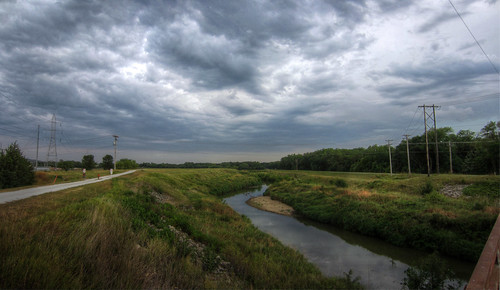 Was hoping that there might be a few people at the unofficial meetup at Good Life Fitness but there were not, I suppose the threatening looking clouds could have kept some people at home but not being that bright I decided to press onward into the park. 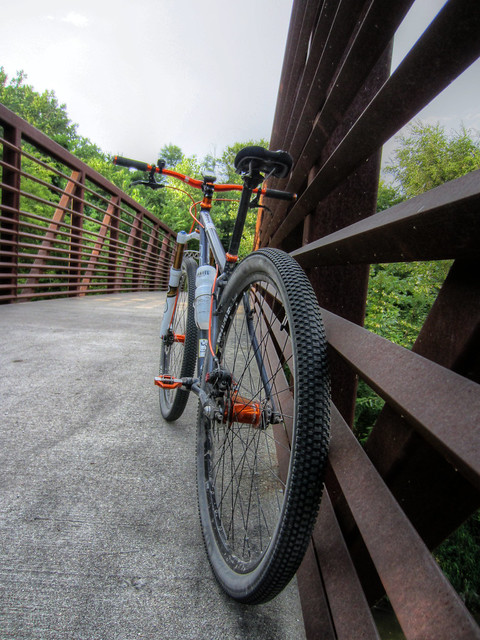 Wilderness Park was in really good shape and I made pretty good time to the turn around spot, since this was a bit less of a formal ride I decided to ask the group if they wouldn't mind doing a little exploring on the way back, see some of the familiar sites that we hadn't seen in a few. Amazingly the entire group decided it was a great idea, it's hard to get a group of people to agree on almost anything so I took that as a good sign. 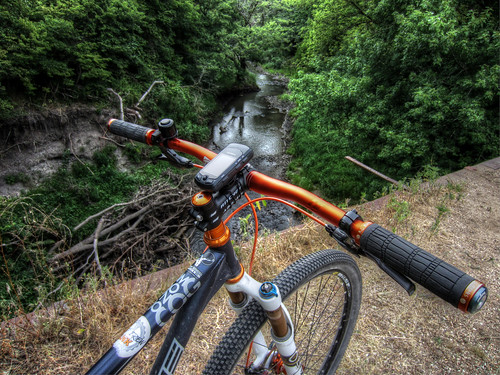 Decided to hit up the old Rock Island Railroad route and take that out of Wilderness, been underneath this bridge on the trail below pedaling my ass off lately so it was nice to slow down and take in Wilderness at a much slower pace. 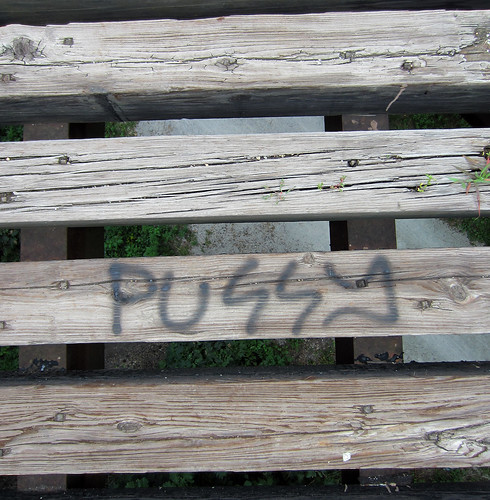 Somebody dropped their pussy on the trail and must not have realized they dropped it because who would just leave a perfectly good pussy behind? I hate when that happens, cannot tell you the number of times I've lost a pussy by accidentally leaving it somewhere. I did get a chuckle due to the placement of the pussy on the wood, I suppose that is where it belongs but I doubt the person who penned it realized the irony at the time. 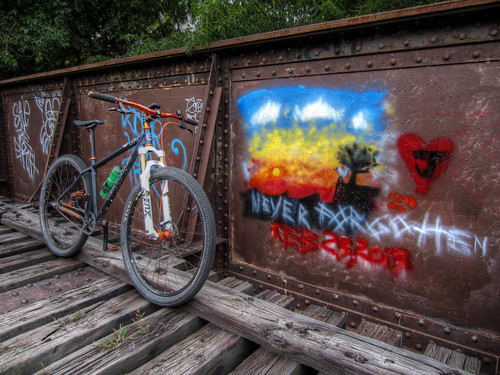 Someone's been boning up on their color by numbers I see, nothing screams lasting memorial like Krylon straight from the can. Not sure what happened on Feb 23, 2013 but apparently we are not supposed to forget... well shit! They could have been a little clearer on what they didn't want us to forget in my opinion. 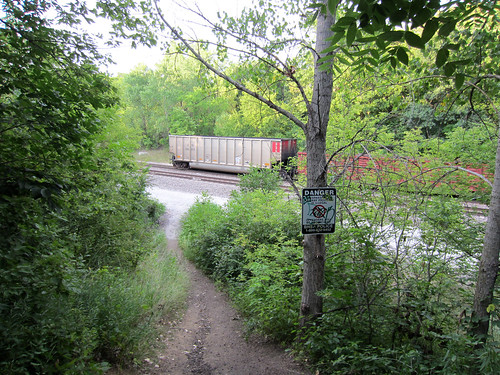 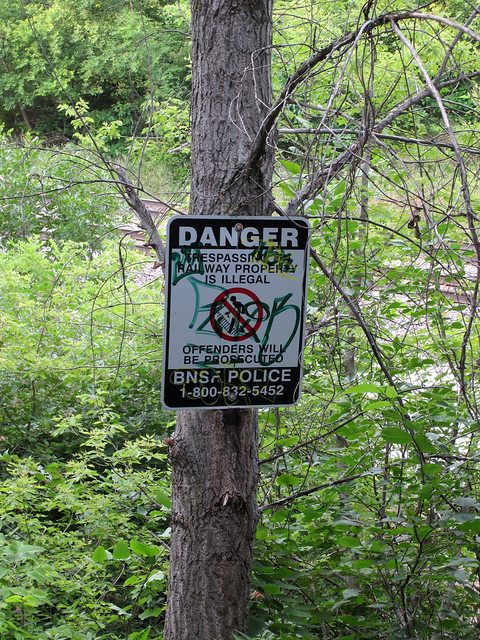 Like I said hadn't been by this way since moving from Lincoln in Feb... wait, maybe the memorial is in remembrance of when I moved... I can't say as it was exactly on the 23rd but it might have been. Damn, I'm touched, give me a minute I'm tearing up just a bit right now. Ok, I think I can go on now. Anyway, looks like the railroad is getting pretty serious about people not crossing their shiny tracks in this particular location, not sure what that's all about since it's been a crossing for decades. 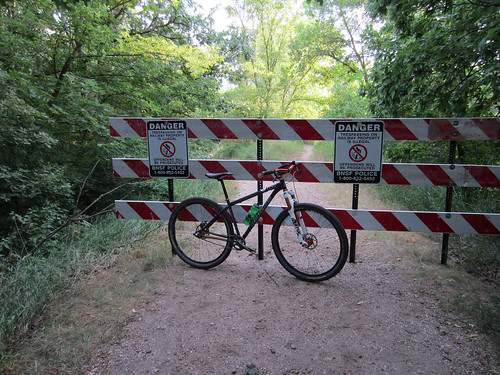 Not wanting to feel the wrath of the BNSF popo, I of course back tracked to the Jamaican trail, rode all the way up to Old Cheney Road then took the trail back on the other side just to see what it looked like over there. I did not, I repeat I DID NOT ride down the embankment on the other side, carry my bike across the tracks, ride up this side and then skirt around this barrier, placing my bike like so just to get this picture. That 4 mile detour was a bitch but it's clearly posted that you cannot cross so you gotta do what you gotta do if you want to know what's on the other side. In retrospect since it was just this barrier and signs it might not have been worth the extra effort but you never know that until you've already done it, chock that one up to a lesson learned right there. 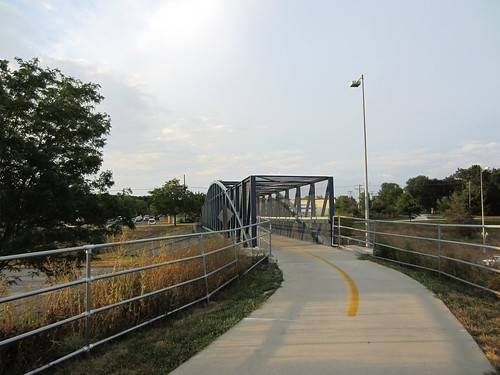 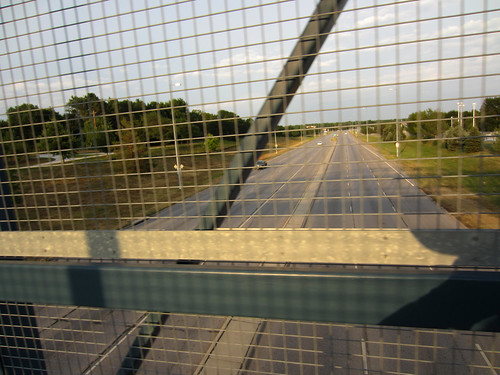 Speaking of cement paths and moving, I do miss the awesome network of trails that Lincoln has that will pretty much get you anywhere in the city that you need to go. You don't really realize how nice that is until it's no longer there, Omaha has it's share of cement paths as well but sometimes getting to them is a bit of an adventure and they don't spider out in all directions like Lincoln. 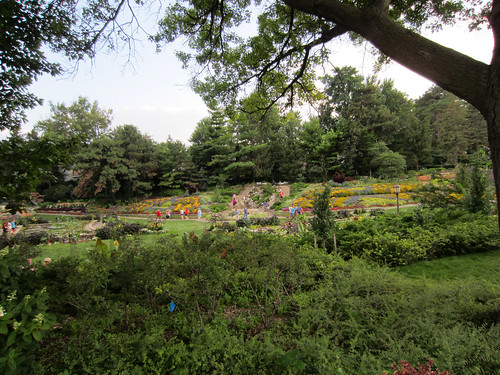 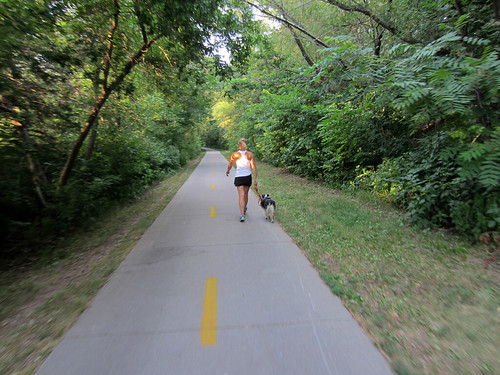 And don't even get me started on the views from the trail... 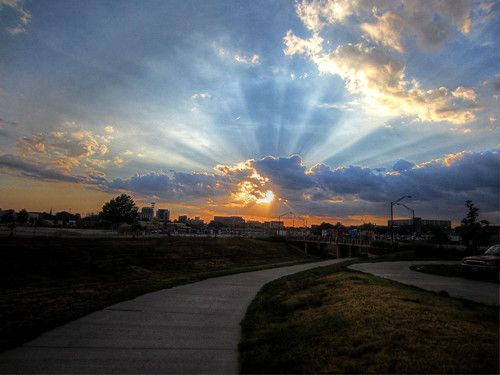 Speaking of, came around the corner to this... I swear I heard that "aaaaaaaaaaaa" sound you see on TV when you're witnessing a miracle, in reality it was most likely just the buzzing from the Chris King hub because I stopped pedaling but man, it was close enough. It was even more amazing in person than it is here in this picture but life usually is. While it wasn't the largest group we've ever had for the ThNNDDR, I would say the ride was a huge success anyway, got to just slow down and revisit some old stomping grounds and stop and smell the proverbial roses a little bit. Life is pretty good from the saddle of a bike.