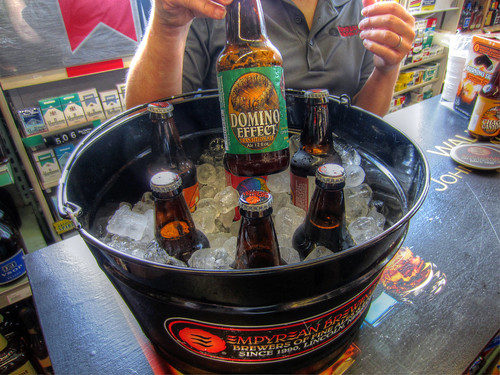 The beer was cold and the weather was dry and unseasonably mild for the fourth installment of the Tour de Brew LNK ride last night featuring none other than long time local brewery Empyrean. It was also the release of their very tasty seasonal brew, Domino Effect, my second favorite seasonal they put out right behind Fallen Angel.

The little ride that could has been growing steadily in the last few weeks but an article in the Lincoln Journal Star this week was certain to peek some interest with those who were not yet familiar with the event, so it was nice to get there a bit early and avoid what was sure to be massive crowds of cyclists. 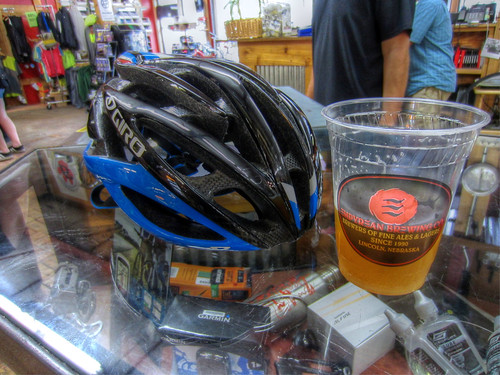 Empyrean brewed up a Mango India Wheat Ale for the event and had the keg tapped and ready to go by the time we arrived at Cycle Works. It was delicious, probably one of my personal favorites as far as the  "special brews"  go that have been served up from the various brewers during these rides. I wasn't alone in that thought either because it went quick, tried to go back and get a second cup but it was already too late as the keg was dry. 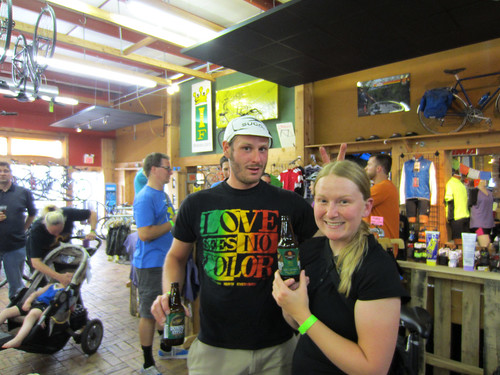 Luckily they also had $2 bottles of Dark Side Vanilla Porter and Domino Effect on hand to help me drown my sorrows about the Mango India Wheat Ale. Those brewers are so thoughtful and always prepared. 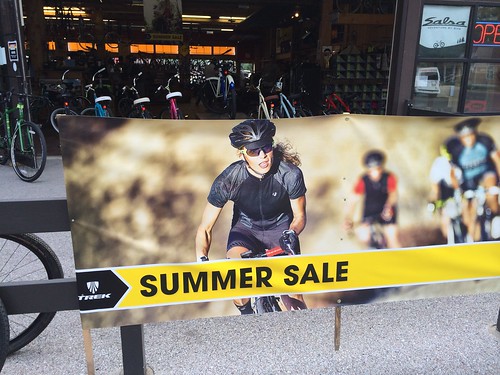 It just so happens that Cycle Works is running their summer sale right now as well... and apparently you can purchase your very own Canadian MTB sensation, Emily Batty, I bet with the Canadian/US dollar exchange rate being what it is right now you could probably get a heck of a deal so make sure you stop on down and get an Emily of your very own!

Had a pretty good group doing the ride tonight, there were actually two more of us that should have been in the picture but we weren't moving fast enough for them so they took off ahead of the rest of us. I think Jonathan said something about needing to be home by the time the street lamps came on so he could get a bath in before bedtime.

Also managed to get another beautiful shot of the top of my helmet as well, if you ask me I think I missed my true calling and should have gone into action photography. I think I'll just keep that in the hip pocket in case I ever need a career change. 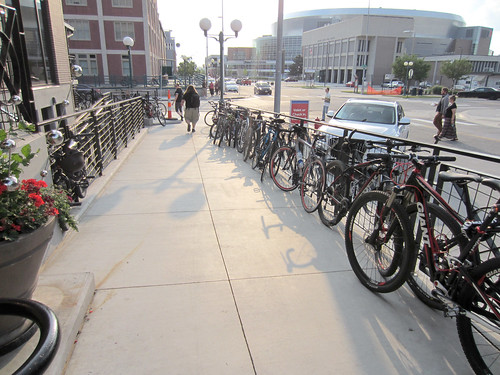 Did I mention that there were going to be a lot of people on the ride? I think all told there were over 160 riders last night, which was easily the most we've ever had for the Tour de Brew LNK. 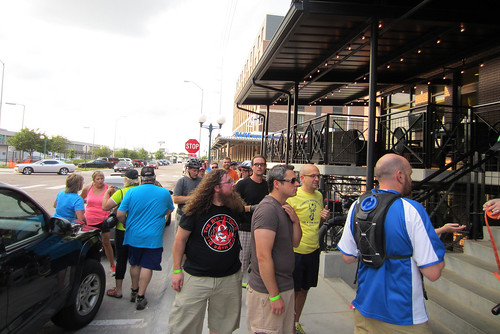 The problem with a good turn out is that it puts a lot of pressure on smaller places like Flatwater Bistro and they simply didn't have the room for all of us on top of their usual Thursday patrons, this resulted in a line just to get in. How long was the wait, no clue exactly but Alix was clean shaven with a buzz cut when he first got in line and now look at that mane. Seriously though, not the fault of Flatwater at all, not many places in Lincoln could accommodate that many people at one time and everyone took it in stride and simply scattered about the Haymarket looking for other options for food. 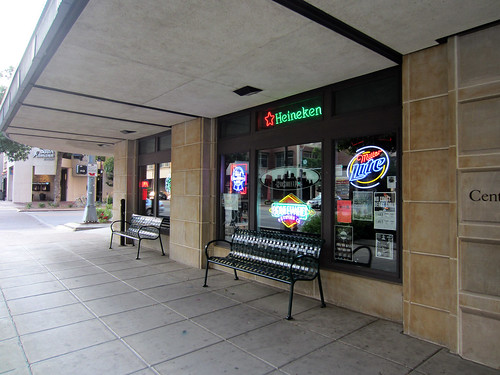 Since it was going to be crowded at the next location as well and because none of us had ever been there but we knew they had food we decided just to head on to 12th Street Pub and get a table there and eat before they got slammed. 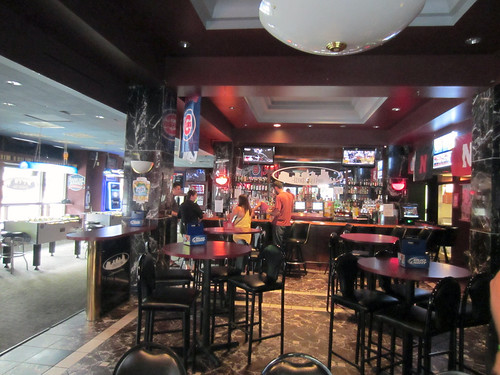 Vince Adam actually came up with the idea, the rest of us just didn't disagree with the logic, one smart dude there, must have worn his helmet as a kid saving the noodle for thinking as well as a stylish place to hold a cycling cap. It was a good call though, nobody was there yet and we were able to get our food and drink ordered well before the hoard descended upon the poor, hapless waitresses. 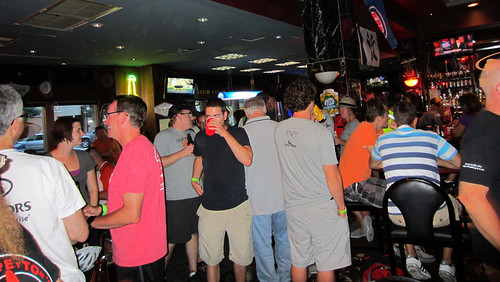 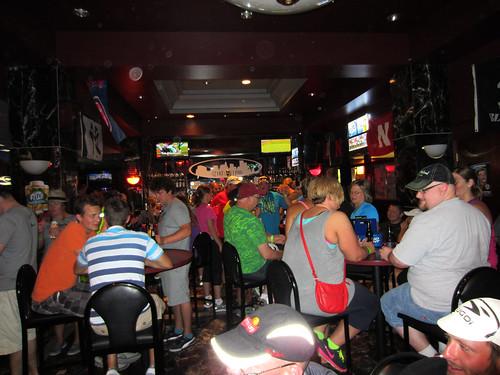 Fast forward 45 minutes and the people per square foot ratio skyrocketed, I'll say it again, that Vince Adam is a freakin genius. 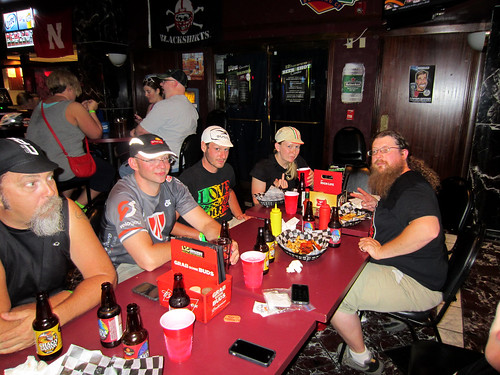 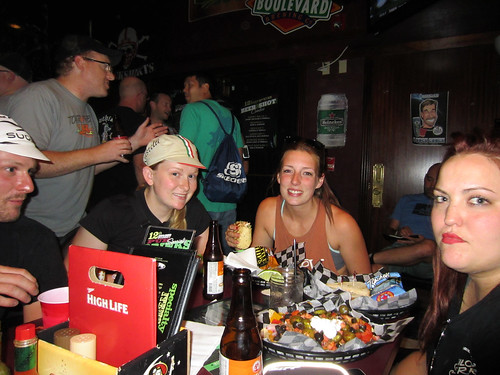 Food was good, beer was cold and refreshing and the company was great. 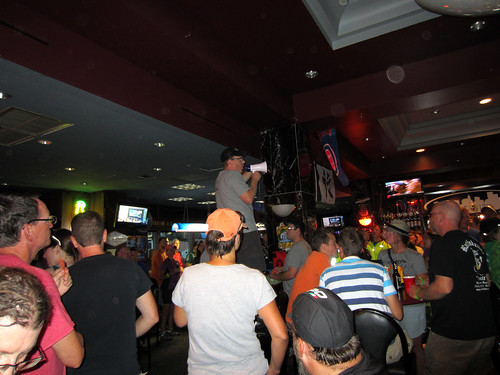 Time for prizes, everyone's favorite time of the night. 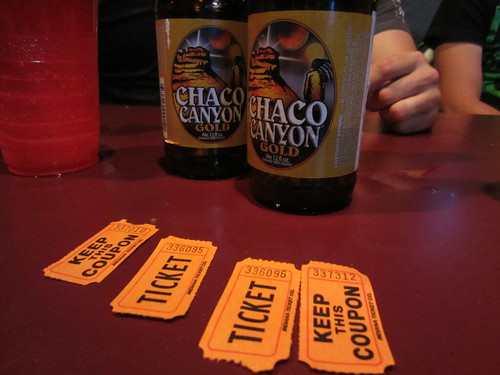 Well except for me that is, I had my usual string of "luck" return and came up with a big goose egg in the prizes department. 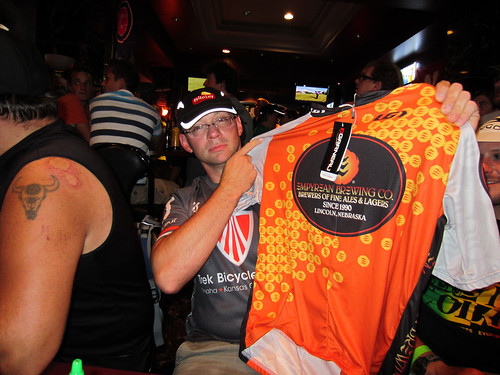 Not everyone in the group shared my unluckiness though, Vince ended up with a sweet Empyrean jersey. 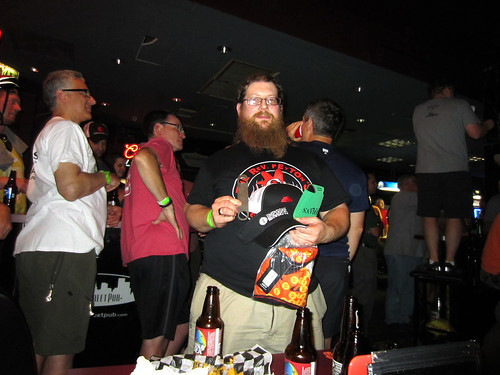 And Alix must have had an entire pocket full of rabbits feet because he could not lose, big winner of the night as he must have walked away with 5-6 prizes. 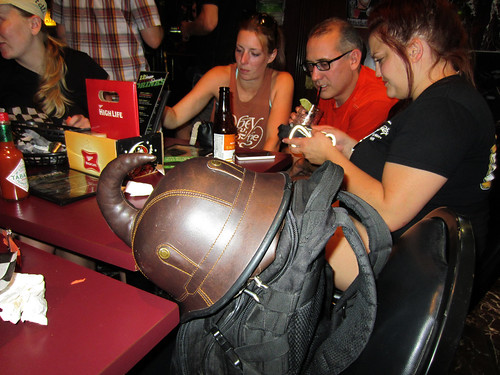 Personally I think it was the half mast unicorn helmet that he wears bringing him all that luck. It's a little know fact but once you de-horn a unicorn the once proud horn flops over like the dorsal fin on Orca whale in captivity. 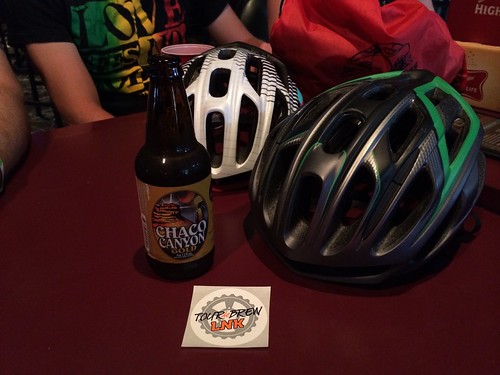 Once the prizes were given out, the food was eaten and the beer drank it was time once again to close the curtains on another amazing Tour de Brew LNK ride and part ways with friends both old and new until the next time. It'll be sad when these rides are over for the year but it's inevitable, summer is already half in the books and the days are just going to get shorter and cooler from here... well maybe not cooler quite yet since we've been fortunate enough to have a fairly mild summer so far.