Chasing my own tail... 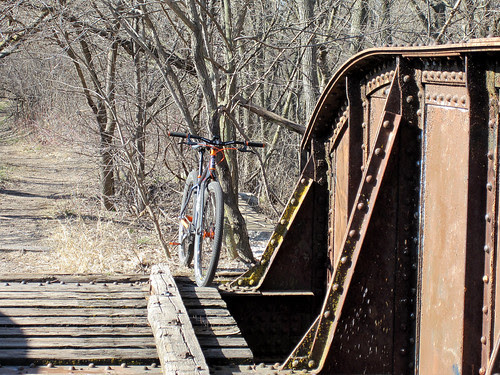 Somewhere along the way I seem to have lost the ability to ride a bike, more to the point I am able to mimic the motions necessary to physically keep the bike upright and pointed in the desired direction but I have lost the ability to just "ride". It seems that no matter where I am going or what my original intentions are I always end up trying to get there as fast as I can. Which poses an even more interesting question, since I generally ride from my house in a loop back to my house... if I am in such a big hurry to get to where I already am, why leave in the first place! I always seem to be racing something whether it be the clock, the sun or the guy on the trail just ahead of me I subconsciously push myself to pedal faster so that I can pass the guy, decrease the time it took last time or increase the average... I used to be able to ride, hell I used to have to ride if I wanted to get anywhere. Did the end of the bike as my only form of transportation suddenly turn it into some sort of sadistic, self imposed, torturous training device that must not under any circumstances be ridden at any speed less than it's maximum? I thought the singlespeed would help since it's basically a one and done bike but it actually might have helped to make the problem worse.The problem with a singlespeed as it turns out is that it's all about maintaining momentum, maintaining momentum is much easier to do at a higher cadence, higher cadence means faster speeds... you see singlespeeds have a maximum attainable speed, you pedal as fast as you can until you can't pedal any faster, that's pretty much as fast as they will go without switching gears which on a singlespeed isn't possible without tools. The fact that they have but one gear really makes them fairly inefficient bikes, they are more difficult to start from a stop, they top out relatively quickly leaving you pumping your legs like hyperactive kid on a Pogo-stick, they suck on down hills because you run out of gear before you run out of hill, they suck climbing hills because you have to mash the pedals in an all out effort to keep moving, about the only thing they are good for is a flat surface with a tail wind or a slight decline. Why ride a singlespeed... well that's a topic for another blog. Maybe the key to relearning how to just ride and not always have to pin it is to find a group ride... unless of course they are all psychotically obsessed with seeing how fast they can push themselves. Maybe instead of just one gear I need to digress further into bikes of the past and go with training wheels, surely those things would cause you to slow down... they can't possibly corner very well at speed!
Posted by Rydn9ers at 1:58 PM