A Photographer who almost wasn't. 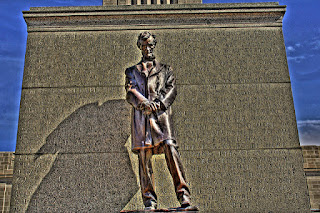 Lincoln Statue in front of the Nebraska State Capitol. 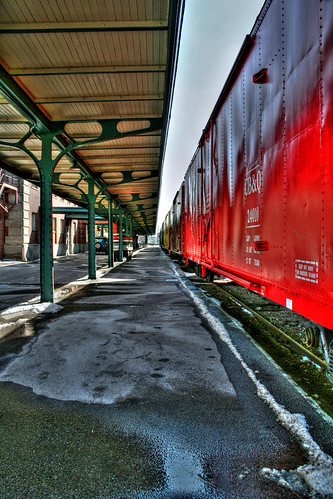 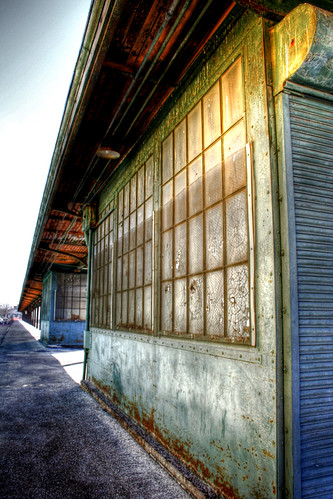 Originally uploaded by RLEVANS
Today was a fairly decent day as far as the weather was concerned so I grabbed my handy, dandy camera and hit the road looking for that next great shot. I have often wondered what it would be like to take pictures for a living rather then as a hobby then I start to think that it might not be as much fun as I think. When you have a hobby it is something you do because you love it, something that takes your mind off of work and something that relaxes you. I think if I ever did it as a job it would take the fun out of it, I would have to take the pictures that other people wanted me to take, be where other people wanted me to be at the time they wanted me to be there, it becomes a responsibility at that point; so I guess for now I am glad that it is just a hobby because I like doing what I want to do when I am taking pictures. I have to admit I wasn't really sure what I was going to take pictures of when I left the house, it is still snowy here and winter still has her gray grips on the world around these parts so that kind of limits what there is to take pictures of everything ends up being white and washed out after awhile, snow here, snow there, everywhere is snow, snow… Spring is a great time to get pictures of the arrival of life again for another year, summer is a great time to get pictures of the dog days of summer, pool side fun, shiny cars and baseball games, fall is a great time to get all of the brilliant colors that mean the end of another year but I am not sure that there are a lot of great things to take pictures of in winter time. That being said if you have a hobby and the urge hits you well then you find something to take pictures of anyway.

I often have thought how great it would have been if I had become interested in photography years ago when I lived in other regions of the country with a few more faces and a few more places. I think how cool it would have been to have taken pictures of the oceans and beaches in California, the mountains in Colorado and Beale Street in Memphis just to name a few places I have been and things I have seen… without camera in tow. Unlike most hobbies my beginnings in photography were not born from a love of pictures, camera’s or a desire to create something artsy; as a matter of fact had it not been for failed marriage and eventual divorced I probably would not have been bitten by the photo bug at all. I came upon photography or it came to me, which ever way you want to look at it as a means of watching and recording my kids on their journey through life, my first camera was a fairly inexpensive Canon Z90W point and shoot 35mm film camera I purchased from Rockbrook camera brand new for less then $80. I probably took hundreds of pictures with that camera and almost all of them were of the kids or from times when I was with the kids, it was a great little camera that took really good pictures for the price, I think the only reason that it was so cheap was that digital cameras had started to come into their own at that time and nobody was really buying film cameras anymore, at least not simple point and shoot cameras. Gradually I started to get more and more interested in photography and started taking pictures of things other then just the kids, family and the trips with them. I eventually upgraded to the Canon Rebel 35mm film camera and then on to the Canon Elan 7E 35mm film camera… both were less then $300 dollars for camera and lens together, again because film cameras even the formerly high end film cameras were not popular selling models like they once had been when film ruled the roost. I still have the Elan camera and to this day it is still one of the most innovative cameras I have owned, it could track where you were looking in the view finder and focus the lens on that portion of the picture… it knew what you were looking at, how cool is that?? Now I am a digital whore and almost never use film anymore, most days you will find me with either my Canon digital Rebel or my take everywhere Sony W55 point and shoot, both of which take very good pictures in my opinion. Digital has many advantages over film, it is instantaneous, you take the picture and immediately see the results, no development time no need to use the entire roll of film before you can get your pictures, you can take thousands of pictures and have the ability to delete the ones you don’t like, you can upload directly to the Internet to store or share. I must say though I have noticed a few drawbacks of digital, I rarely print photos anymore; I have photo albums that I used to meticulously maintain and update every time I got the latest roll of developed film back, now I rarely add to the albums because no one prints digital like they did film it is all virtual now, you upload your pictures to cyberspace and share them with anyone you want but for the most part you just don’t send them off to get printed. I know what you’re saying, you don’t have to send them anywhere you can print them off at home now. Well yes you can but if you have ever seen a digital photo printed at home and compared it to one you get from a QUALITY photo shop they are worlds apart and by a quality photo shop I am talking about a place where the professionals take their digital media to get printed I am not talking about Walmart, Walgreens or their likes, a quality place can create photos from your digital media that will look exactly like your old film pictures used to look. I guess what I need to do is to get back to printing off pictures again, having them digitally available to you over the Internet at anytime and any place is nice but for me there is still something to be said for sitting on the couch holding that leather bound album and sharing the stories behind the pictures with someone. Pictures without the story are just images devoid of a soul, it is the story that gives them life far beyond what paper and chemicals can ever give them. Photo paper might last 100 years but a good memory passed down from generation to generation can last forever.

A photograph is usually looked at - seldom looked into.
~Ansel Adams~
Posted by Rydn9ers at 8:09 AM