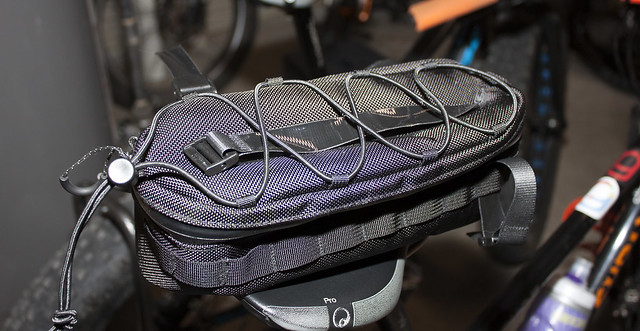 A few months back I picked up a set of the highly sought after Surly Moloko Handlebars for the Pugsley and then shortly after that I ordered the even more highly sought after Moloko Handlebar Bag or as Surly refers to it the Moloko Adjunct Personal Effects Receptacle.  The bags weren't available so I had to wait on it for about a month and a half before it showed up but I figured if it was as good as the bars were then it would be worth the wait. This is not meant to be a technical review but more my initial thought on the Moloko Handlebar Bag, the interwebs are full of technical specs if that's your thing. 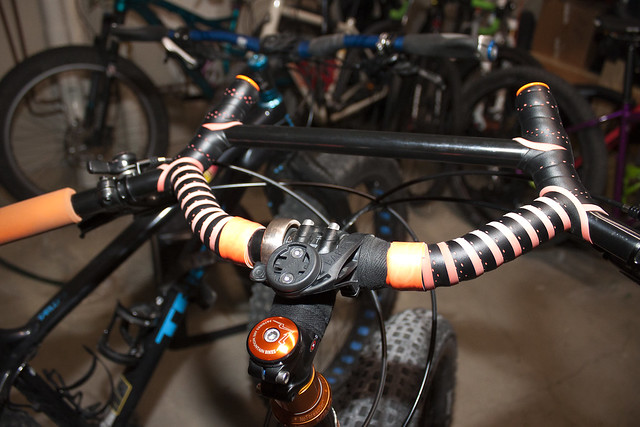 As you might have picked up on already, the bag fits perfectly in the opening in the middle of the crazy looking Moloko Handlebars. The bars certainly have a look that is a bit unusual but so far they have been super comfortable when paired with the ESI Super Chunky grips. This setup replaced my flat bar and Ergon grip setup that I was running since I got the Pugsley a few years back, so far I haven't noticed any more numbness in my hands than I did with the Ergon grips so that is saying something right there. The angle on the bars is slightly more than the Jones and to me it just seems to be a good natural grip angle. 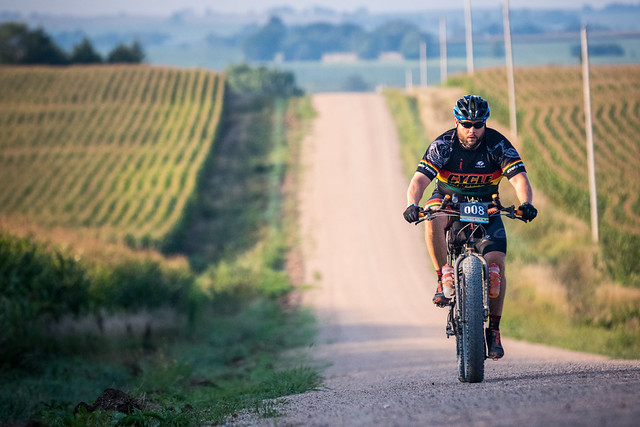 I didn't have the Moloko bag for Gravel Worlds ( if I did maybe I wouldn't have forgotten my tunes and food) but I was riding the Moloko bars for it, so I did spend a good 14 hours and 150 miles straight on the bars and never felt any worse for wear and the nubs out front came in pretty handy for stretching out and cruising; something you won't get with Jones bars if you're at all interested in a more road bike position while out on gravel or dirt. 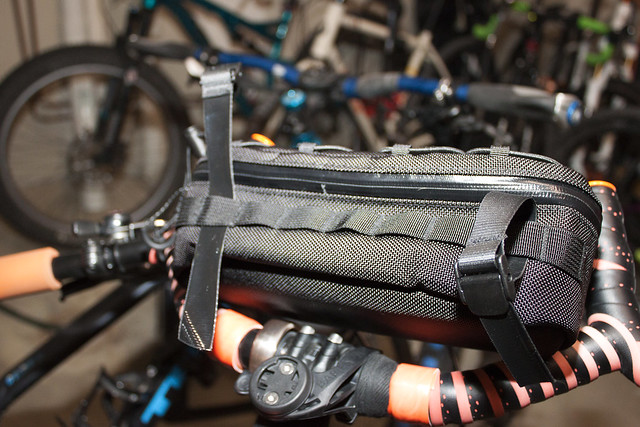 Back to the bag though, the bag comes with 4 straps that can be attached in almost limitless positions thanks to the multiple attachment loops on the bag. That feature comes in handy when you are using the bag in conjunction with a feed bag or other bag/device that attaches to the bars because of course they will naturally want to strap to the bar in the same exact spot. The straps themselves are rubberized on one side and a fabric type material on the other side, so far they have stayed where you put them and haven't come unfastened while riding, which is pretty important for a strap to be functional. 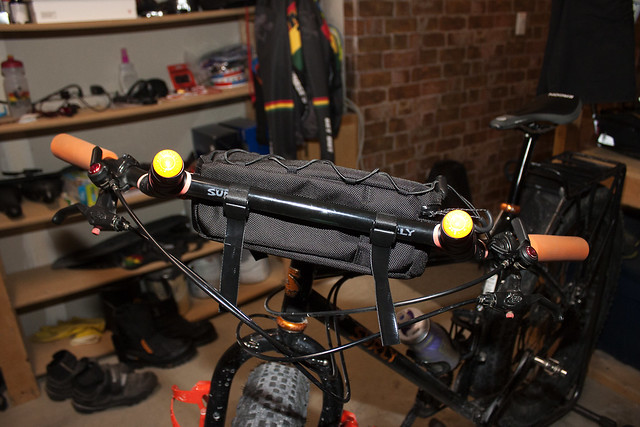 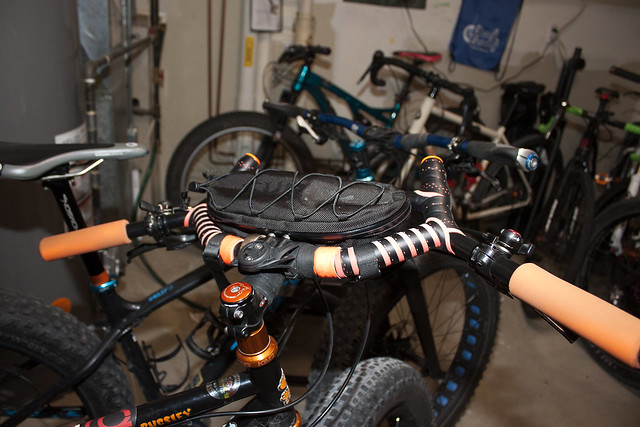 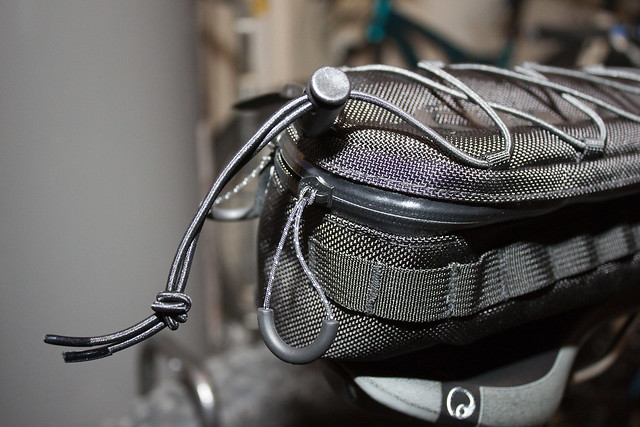 The bag sits pretty low in the handlebars so it is nice that Surly put large zipper tabs on the bag, so far they have been easy to find and operate even with full finger gloves. Since it's just now beginning to get colder I don't have any experience with winter gloves but I suspect it won't be an issue with those either, now if you're a mitten or lobster glove wearer your experience might vary. One thing to keep in mind is if you wrap the bars as I did with a thicker tape, it will make the opening a little tighter than it would be on unwrapped bars so depending on how much you plan to carry in the bag you may want to leave the bars unwrapped around the opening to maximize the space available. Realistically the only part of the bar that benefits from being wrapped are the "horns" out front just as a little padding and added grip when your hands or bars are wet IMO, the rest if more for aesthetics. 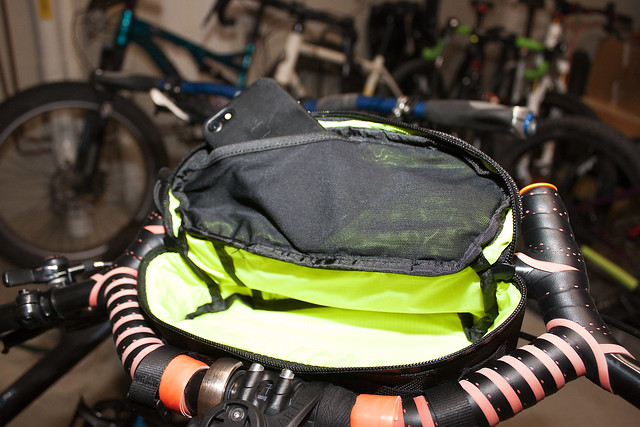 The outside of the bag might be black but the inside is lined with a neon green fabric, this comes in really handy at night or low light to help find dark items against the lighter back ground. The stretch pocket on the top flap perfectly fits a cell phone and a Ziploc with a license, credit card (or cash) and Chap-stick in it. As a bonus the heft of those items helps to keep the bag closed while riding in case you forget to fully zip the zipper before taking off. Given what you might stash in the bag, credit cards, license, keys, wallet, etc. making sure those items don't fall out is pretty important. 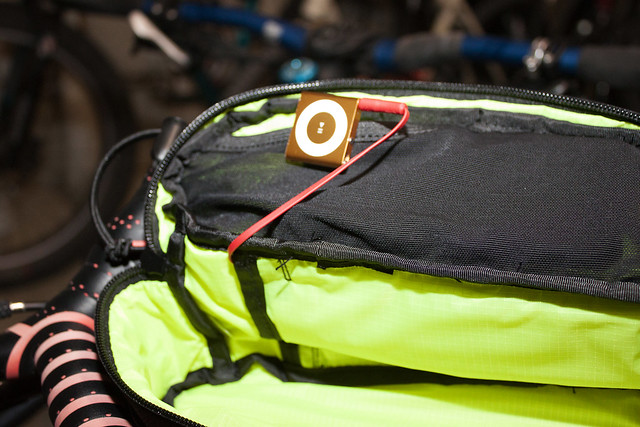 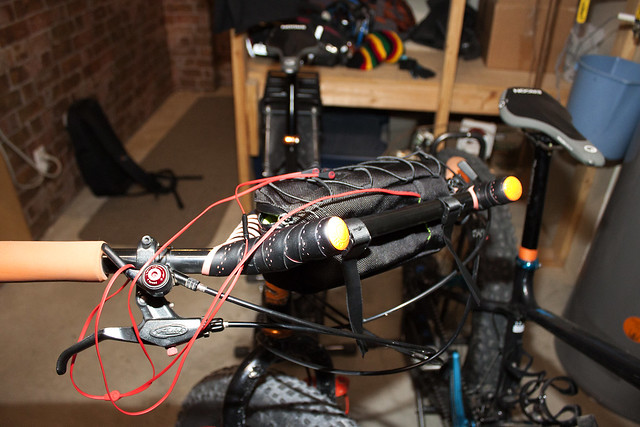 Another great feature that I didn't initially notice is that there is an opening at the front of the bag that allows you to feed ear phones or power cables through so that you can listen to music or recharge your cycling computer, lights or whatever other electronic gizmo you ride with without exposing your MP3 player of choice or your external battery to the elements. Even though the opening is at the font of the bag farthest away from you, there is still plenty of headphone cable left to make it to your ears or ample charging cable to make it to your cycling computer or other device although a cable at least 4 feet in length might be best for charging. In the picture I show a pair of dual headphones but when riding I opt for a set of headphones with only one earbud so that I can still hear what it going on around me, there are several companies that make them now or you can do as I did for my first pair and just cut off one of the headphones from a regular pair and then use something like liquid electrical tape to close the end off. 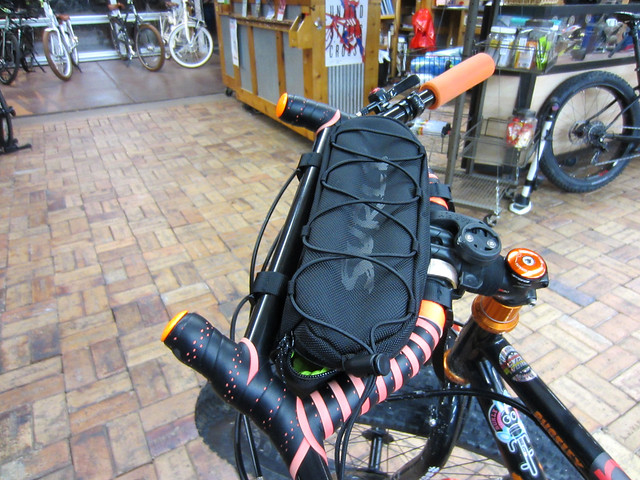 Despite it's smallish appearance the Moloko Handlebar bag is deceptively roomy inside, you can fit two 12 oz beer cans inside there and still have room for your phone, wallet, keys, etc.... not that I would know that since beer is yucky, in addition to the inside storage there is also draw string on top of the bag, while I haven't used it yet I do think it will come in handy for carrying items that might be too bulky to fit inside the bag yet still keep them secure on the outside of the bag with the ability to tightly cinch them down. In the spring or fall when layering is key, I can see rolling up a wind jacket or vest and stowing it there once the layers start coming off and since the bag is on the front you also have to worry less about those layers falling of unnoticed while riding. Nothing is worse than getting done with a ride only to find out something fell off the bike and you either have to go back and look for it or spend your hard earned cash to replace it. If you're like me I am really digging all of the bags that they now have that attach to the bike so you can keep the bulk of the weight off you and on the bike. I suppose one drawback to the Moloko bag is that you have to have the Moloko bar first to get the most out of the bag... it might fit in a Jones bar and work just fine but since there is already a bag out there designed specifically for the opening in a Jones bar I don't see the reasoning of using this one for those bars.

Well, that's the quick run down on the bag, I'll try to get another post up in a few months when I've have more experience using the bag.
Posted by Rydn9ers at 10:23 PM