When last we left our heroes they had indulged in the fruit of the tree in the middle of the road and had picked haunted pine cones in the final resting place of the fist European settler in Audubon county, IA. 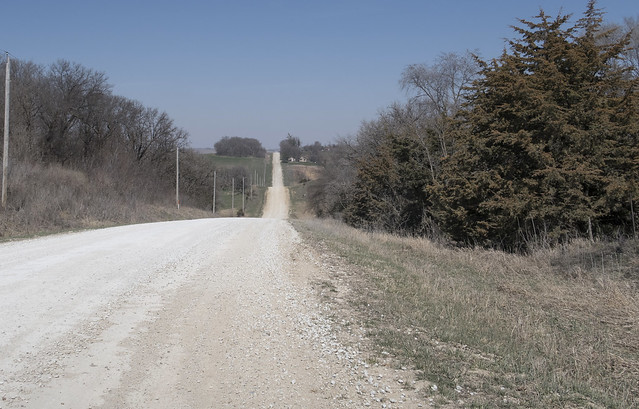 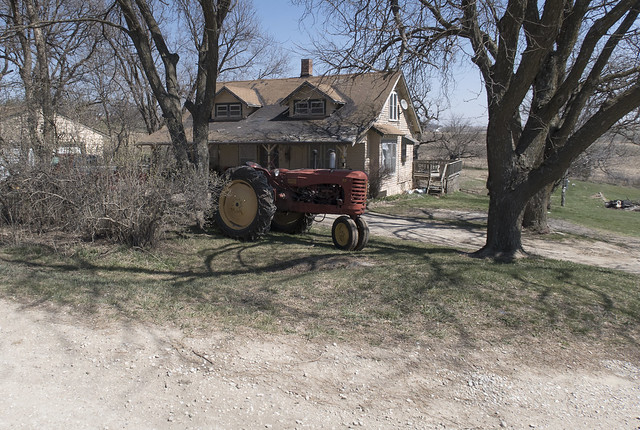 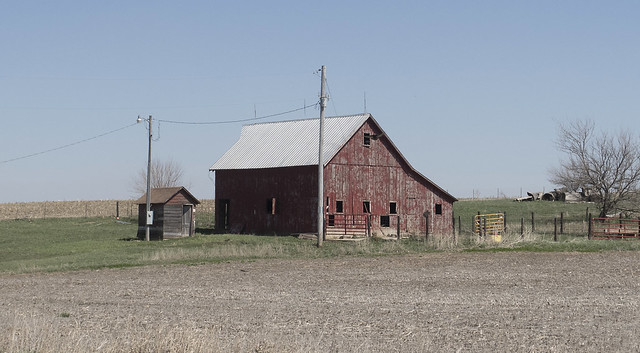 Shortly after the cemetery we split off from the main group and continued up Lark Ave. on our own. The hills really started to pick up after the split but little did we know that they would get worse after leaving Exira. 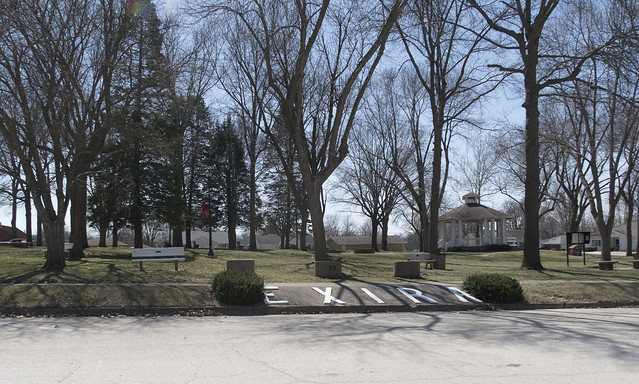 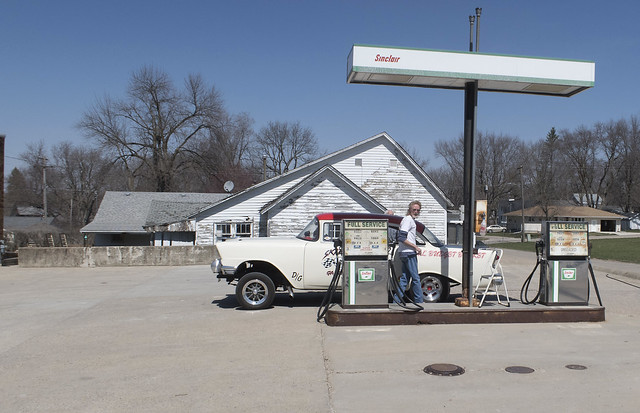 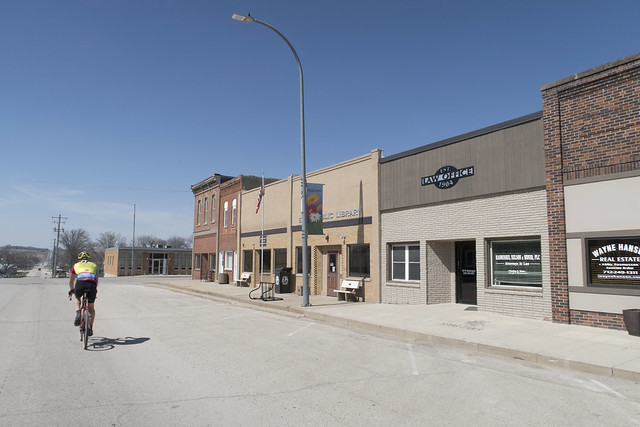 We rolled into Exira at about mile 25 and hit the local Casey's for some food and drink. Exira has the notoriety of being the first town in Audubon county, founded in 1857. It is also the birthplace of former NFL player and head coach Jack Pardee who played for the LA Rams and Washington Football Team (formerly the Redskins) before coaching the Bears, The Washington Football Team (Redskins), Chargers and Oilers. Rumor also has it that Exira puts on one heck of a 4th of July shindig if you happen to be in the area around that time. 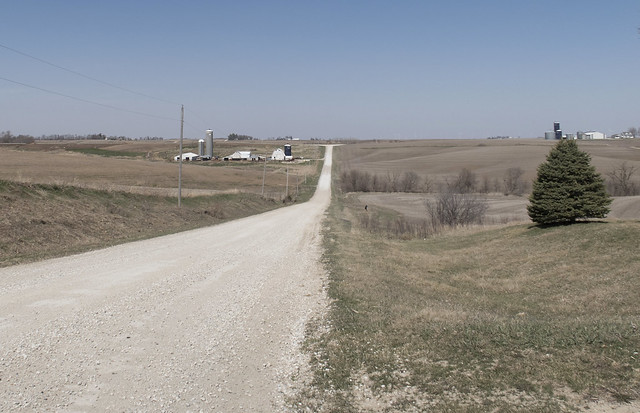 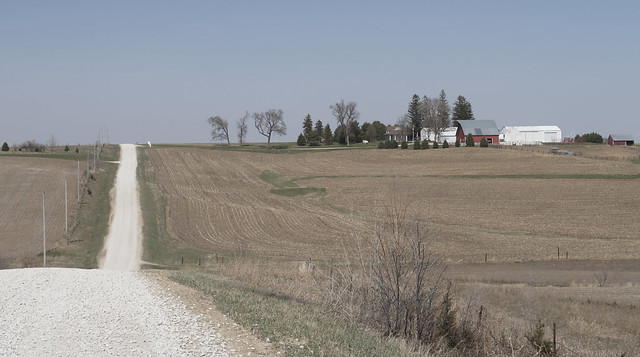 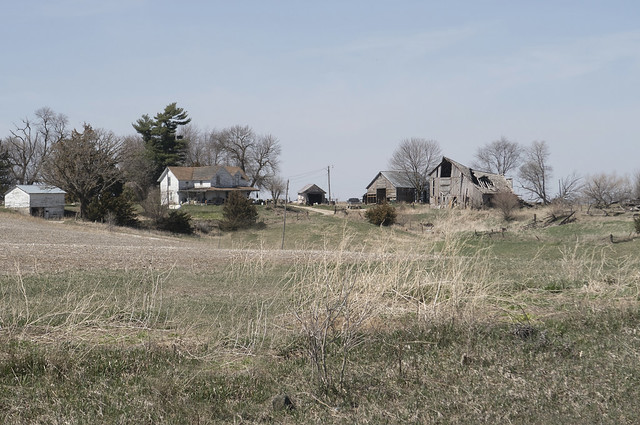 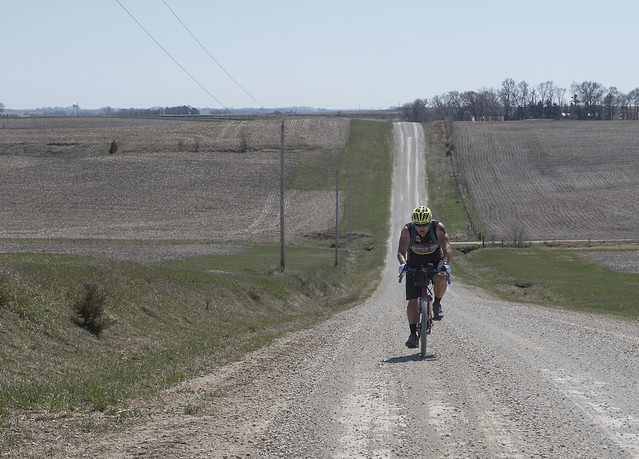 Leaving out of Exira we encountered more of the big rollers but this time they were mated to some of the thickest, chunkiest white rock gravel I've seen in a while and it stretched on for miles. I kid you not, looking back at the route it was probably a solid 8-9 miles of chunky white rock. I lamented to Doug that the county must have one heck of a budget as I'd never seen a continuous stretch of new rock this long, ever! 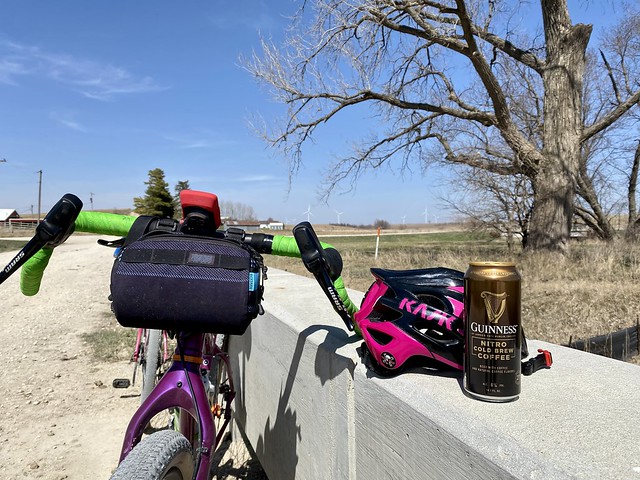 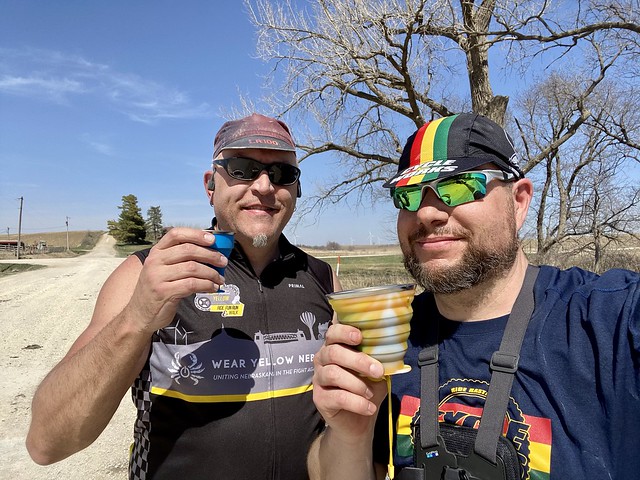 After all that shake, rattle and roll it was determined that a hydration break was in order on this tiny bridge spanning the even tinier creek below. 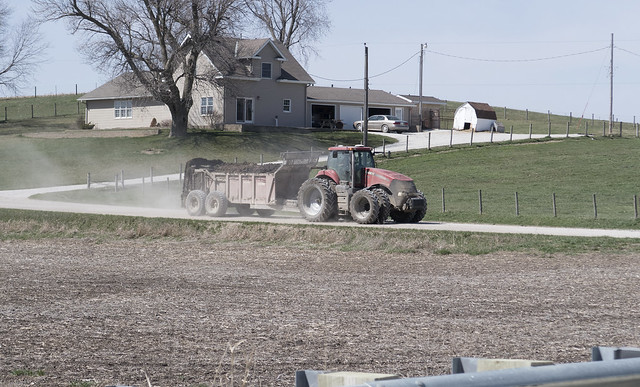 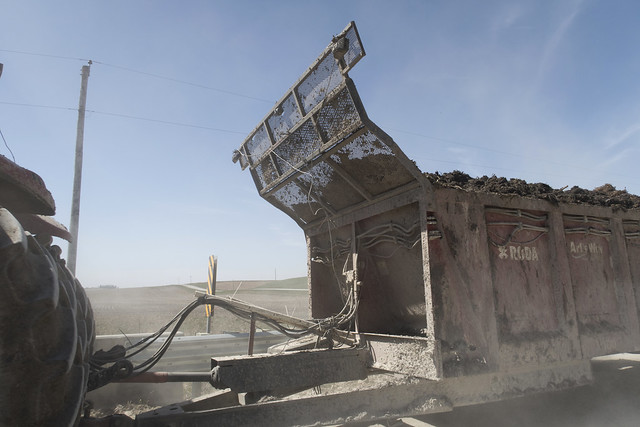 It's probably a good thing we did stop, otherwise we might have missed out on the heaping trailer full of pig manure that went by as we were standing on the bridge and it would have been a real bummer to miss out on that. 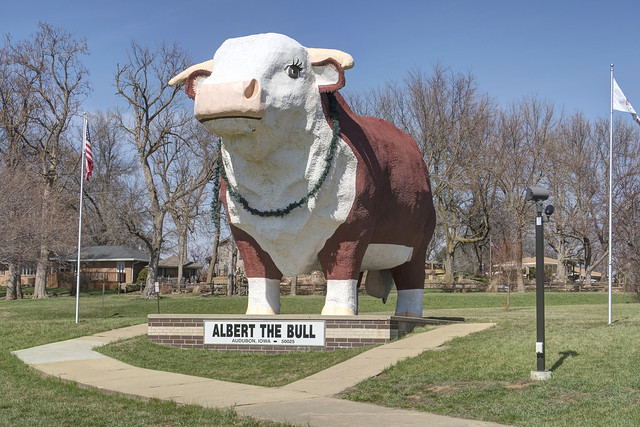 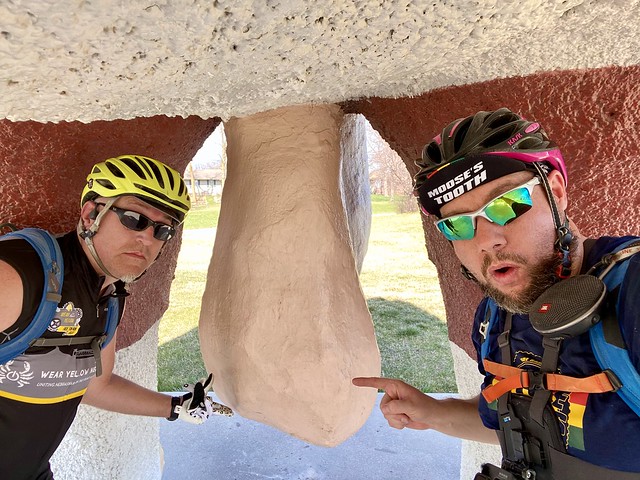 At last we made it to Audubon and the anatomically accurate(ish) Albert the Bull. I say (ish) because while he had all the parts they looked a bit misshapen and odd looking but I suppose what do you expect from giant cement bull testes. 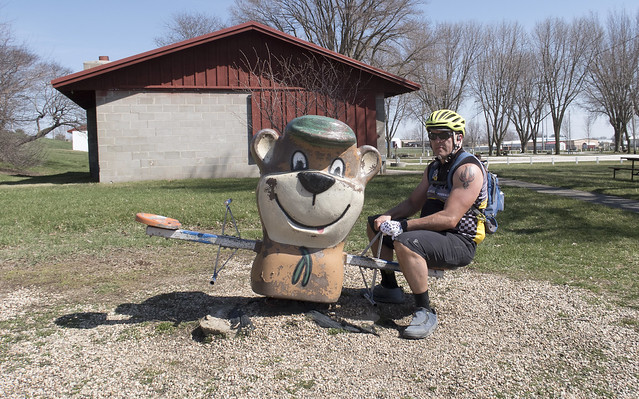 The town is not only home to Albert but is also the birthplace of Harold Kaufman, the physicist responsible for NASAs Ion thrusters used in the 50s and 60s for spacecraft propulsion. But wait that's not all, it is also the birthplace of none other than C.W. McCall the crooner of trucker based outlaw country songs. His biggest hit, Convoy, subsequently spawning a movie of the same name staring Ali MacGraw, Ernest Borgnine and Kris Kristofferson. If that weren't enough for one small Iowa town, it is also named after John James Audubon... yes that John James Audubon, famed ornithologist and namesake of the Audubon Society. I'm not completely sure why the it was named as it was as I don't believe there are any ties between the town and the person but then again why are any towns named after famous people. For a brief time on Saturday it was also the "home" of two sweaty, scrotum grabbing, cyclists teetering away in the city park... nothing creepy about that at all. 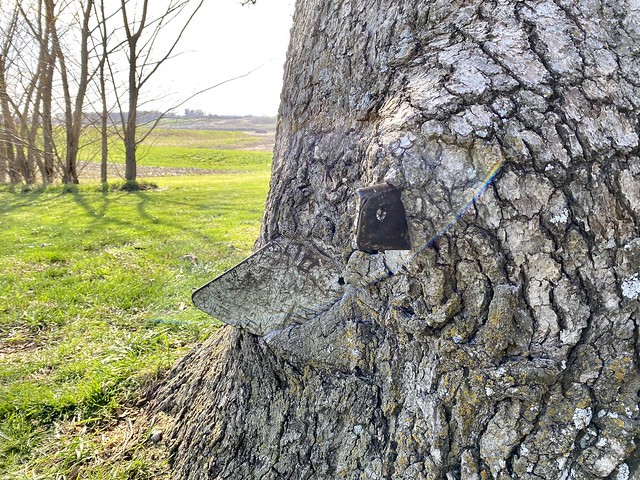 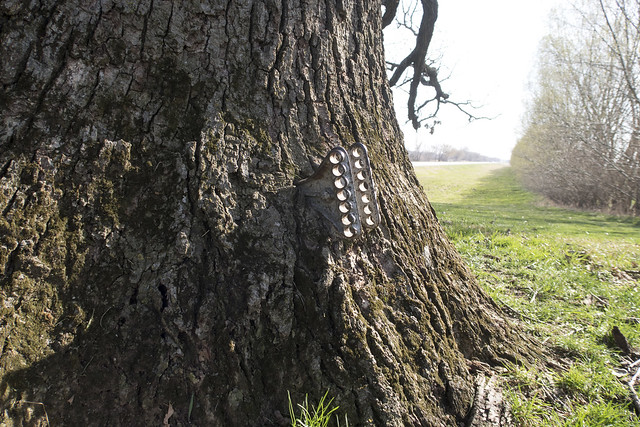 We jumped on the flat, boring but much appreciated T-Bone paved trail for the journey to the Plow in the Oak. While true to it's name I am not sure what I expected but was hoping for something more but nothing more than a plow stuck in an oak was to be had that day. I feel like there should have been a vendor selling "I visited the plow in the oak and all I got was this lousy T-shirt" apparel but there wasn't even that. 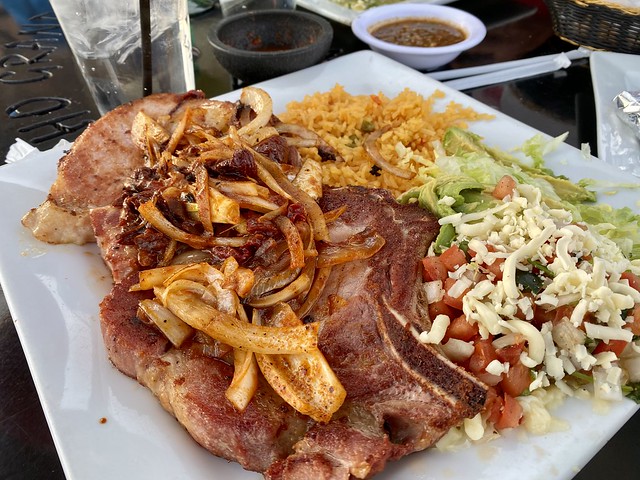 The ride back to Atlantic was fairly uneventful, other than a lecture from a land owner not thrilled with cyclist on his recently purchased road, and we made quick time of it since it was mostly paved trail. The food and drink at Rancho Grande were fantastic, I opted for the Chuleta Ahumada (smoked pork chop) and the "medium" 32oz margarita. Yeah, they had a 64oz if you were really thirsty but I thought better of that choice. 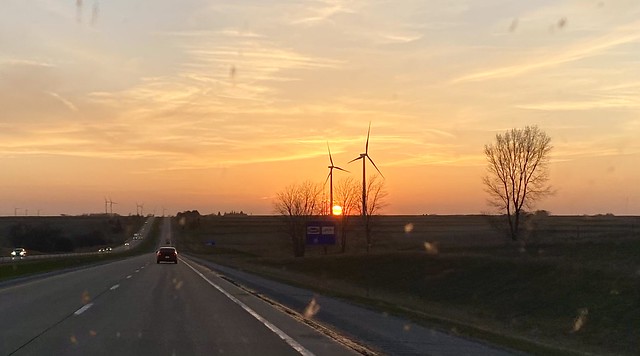 After dinner we loaded up the bikes and started the journey back to the Nebraska side of the border. Having spent almost 12 hours on the Iowa side, it was a full day of riding and discovery and I think we were both ready for a hot shower and to be done with pedaling for a bit. It was a fun little trip though and an area that still has lots of other bits of American left to be seen, a quick search on the Google-ator revealed at least another dozen or so things one could hit up while riding in that area. Perhaps another day.

Here is the video from the day, give it a watch if that's your sort of thing and maybe hit that like and subscribe button if you're so inclined to do so. Next week Doug and I are headed to the Tongy Trots in the Kansas City area, should be a fun little event so stay tuned for that.

Email ThisBlogThis!Share to TwitterShare to FacebookShare to Pinterest
Labels: Albert the Bull, Atlantic IA, Bike Iowa, Cycle Works, Fargo, Gravel Adventures, Plow in the Oak, SMNDFBR, Tree in the Middle of the Road