Every once in a while something happens that makes me think that maybe true love still does exist; that maybe there really is someone for everyone, that perfect match, that soul mate. Tonight while running some errands I stopped for a bite to eat and saw this adorable elderly couple who happened to stop at the same place; it was very sweet to watch as he walked around the car and helped her out of the car. I know that this maybe doesn't seem like that big of a deal really but you have to picture this man, probably in his 80's, who isn't quite as steady on his feet as he once was but that didn't matter to him. What did matter to him was that he was there for his wife to help her out of the car since she also isn't as steady on her feet as she once was. He slowly made his way around the car, opens her door and helps her out and together they slowly make their way inside hand in hand. It was a very romantic gesture because obviously it would have been much quicker had they both just gotten out and walked in on their own but he took the time and effort to come around the car and she took the time and the understanding to let him so that they could walk in together. I watched them as they sat there smiling, laughing, touching each other as they ate; while their bodies were getting up there in age the look in their eyes and the way they interacted together said that their love was still young, still bright, still as strong as it was when they first met. I don't know for sure that they had been together for 40 or 50 years but I would like to think that they had, maybe part of me needs to believe that, to believe that love can still overcome all obstacles, that it can survive in even in today's "me" society. Sometimes hope is all we have to cling to, hope that there is something better out there than where we are now, hope that someday 50 years from now I will be able to walk around the car, open the door and have a hand waiting there for me to help out of the car, to hold as I walk into the restaurant, someone to share all that I have to offer. Is that too much to ask? 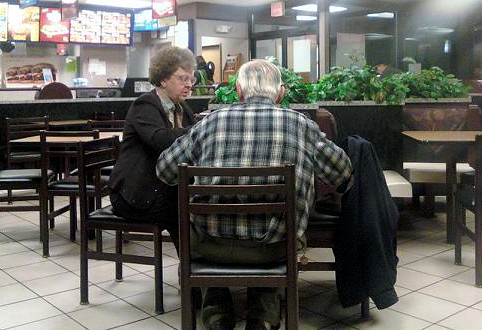