Two wheels, one world... one gear.

Everything moves in cycles, everything revolves, what once was new becomes old, old becomes retro, retro becomes cool, someone decides to do it all over again and the cycle starts all over again. Fashion, cars, styles and even bicycles, what was once old and outdated is rotating and becoming the thing to have again; the more things change, the more they stay the same. As some of you know, and more of you should know, this is national bike month, during the month the powers that be try to educate people about the benefits of biking and try to encourage more people to start or get back to biking. Why anyone would stop biking has always bewildered me but most adult American's give up riding a bike about the time they learn to drive and get a car. I had a few issues at that end of last month with one of my bikes, I still believe that it might have secretly been trying to kill me. Trying to find a rim became way more difficult than it really needed to be and that left me with a void on a daily ride. I eventually found a rim and it is in the process of being built as we speak... well probably not as we speak because the bike shop is closed but it is in the works. A funny thing happened on my quest for a new rim, several visits to various bike shops around town left me drooling over all the orphaned bikes looking for a good home. The stars aligned, the moon turned blue, the heavens opened up and I think the lord himself came down and spoke to me... or maybe it was just a long haired, gypsy looking bike mechanic, sometimes I get them confused but the result was the same. I have been eyeballing the Redline Monocog for several years now but never pulled the trigger on the purchase... until NOW! 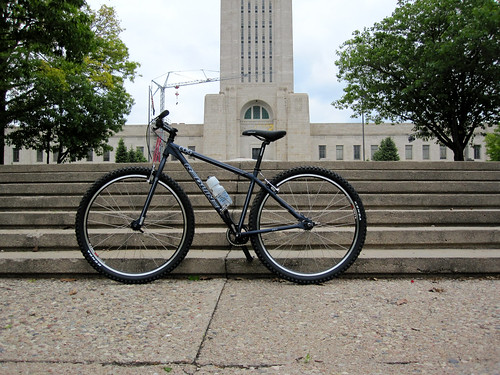 There have always been several things about this bike that just kept calling to me, old school Chro-Moly frame, single speed and 29 inch wheels and a sweet price tag but for one reason or another I just kept walking away. Not anymore though I now have one of my vary own. I picked it up yesterday, not the runt of the little but not the biggest of the bunch either, with just the most adorable little button stem you ever did see... and I have it on good authority it's house broken. Of course I had to immediately modify and remove several of the "non-essential" parts that shops are required to bolt on before the bike rolls out the door. 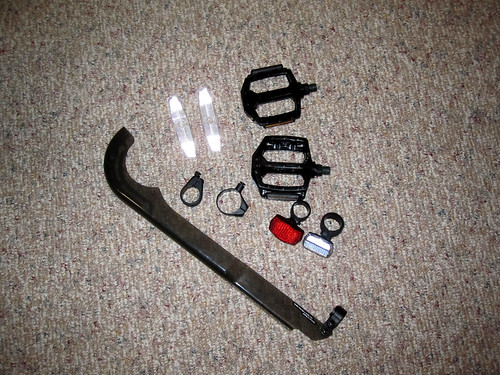 I really wanted to take it for a ride yesterday but the weather just wasn't going to cooperate so today was the maiden voyage. I have been riding multi-gear bikes for so long it was a little bit strange getting used to having just the one gear but as the ride progressed a wonderful thing started to happen. With out gear selection always on the brain my mind had time to wander to other things and really notice things that just flew by before, of course I also wandered back to yesteryear. Redline used to be one of if not THE bike to have when I was a kid, in my neighborhood anyway it was either a Kuwahara, a Mongoose, Redline or a Schwinn Predator (yeah that's right Schwinn used to make bikes people actually wanted). I of course had a Montgomery Ward Open Road Excalibur bicycle, complete with banana seat, chain guard, and some pretty sweet fenders. 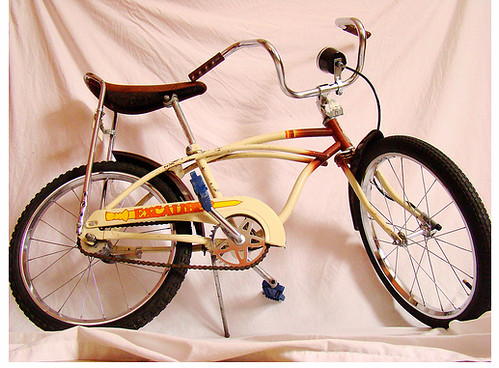 You can only imagine how it just irked my parents to see the fenders, chain guard and kickstand missing from the bike after the first week but what was I supposed to do I had to try to salvage some cool points somehow. All things considered it was a decent bike, weighed as much as a small car but it was sturdy and it was where it all began... and how can you not love the banana seat?

Riding on the Monocog brought a flood of memories of those years gone by and bikes had and long gone. It might not be the fastest bike, it might not be the most exotic frame material out there, it certainly isn't the most sophisticated bike in the world today but sometimes simpler really is better. I had a lot of fun riding the Redline today and I think that the fun is just beginning, for the price it is one of the best bike investments I have ever made, that and the added nostalgic trips down memory road it is going to give me I just can't see where I can go wrong. It might have taken 30 years but I finally got my Redline and about the only thing different about it now is the size of the tires and the fact that one speed is now a niche rather than the norm but how can you not just love matte blue and silver as a paint scheme. I might be the only person I know who goes in looking for a rim and leaves with a whole new bike! 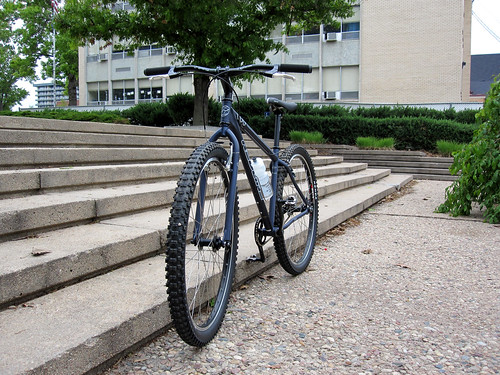